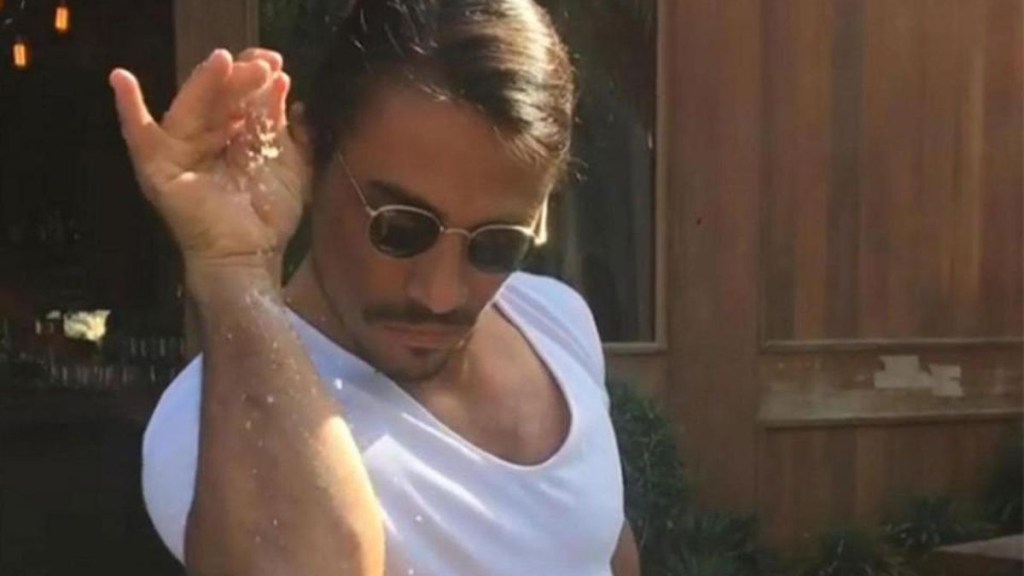 Last week we told you the story of Salt Bae, the Turkish butcher and chef who with one magical sprinkle of sodium turned himself into an overnight celebrity. We also shared with you that the man born with the name Nusret Gökçe was on the verge of opening a restaurant in New York, bringing his love of beef and made-for-social-media theatricality to the Big Apple.

The new location was the 13th outpost of his Nusr-Et steakhouse (already with locations in Turkey, Dubai, and Miami), and with the eyes of New York media on him, he wanted to up the ante a bit. Ever since his star-turn on January 7, 2017, where he dramatically sliced a tomahawk steak and flamboyantly seasoned the meat, he has continued to film over-the-top videos. He’s made a burger tower covered in molten cheese, karate chopped all the bones on a prime rib, and, of course, there’s the one where he does pull-ups on a basketball hoop support for no apparent reason. His video this week though has not gone over well with the internetinati.

With his trusty blue-handled blade, he filets open a tenderloin atop a grill, then proceeds to layer on what is either pre-sliced cheddar or Kraft singles, then undercooked asparagus, then more cheese. He wraps it all up, plants five #saltbae-branded flags in the roll, does his little magic sprinkle thing, then slices into it so you see an oozing cross-section of this abomination. People were no longer amused.

After all that hype he came to the US to make Tasty videos…I'm screaming. 😭😭 pic.twitter.com/KTUwuZXrfH

The crime is the raw asparagus in the middle. Good lord…

But, really, it’s not just this video causing a backlash for the social media star. The reviews of his new restaurant are starting to roll in and they are not pretty. Eater New York critic Robert Sietsema said he and his dining companion went home hungry; Steve Cuozzo of the New York Post called the place a rip-off; and Joshua David Stein wrote on GQ that the steak was bland and the burger overcooked. Looks like the media is breaking up with its bae.

So if you planned visit to Gökçe this weekend, now consider yourself forewarned.