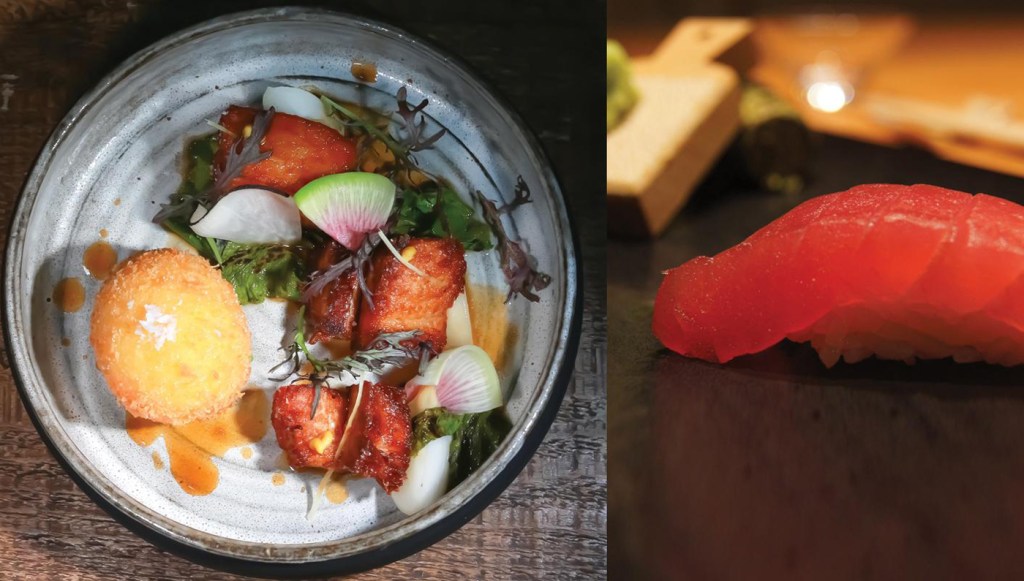 For a city that prides itself so much on its culinary prowess, San Francisco has had quite the Achilles heel for some time: its serious lack of a strong sushi game. The vast majority of sushi bars in the city remain oddly focused on quantity (and creating wacky maki rolls) rather than quality. And when there’s a place that rises above murky maguro mediocrity, many sushi aficionados tend to keep it to themselves. But keeping those kinds of secrets doesn’t improve the city’s sushi situation (or reputation) one bit, so we’re here to tell you about five sushi counters that really elevate the scene.

This downtown hideaway has a reputation for sourcing some of the finest fish in the city—thanks to the relationships owner Ray Lee has formed in his obsessive quest for the highest quality seafood—but he also has a commitment to sustainability as well. Cruise the main menu and choose à la carte, and the special “nama” seasonal menu is where the die-hard sushi lovers cast their nets (you’ll probably find fish you’ve never tried before). You can also opt for six pieces of moriawase nigiri (chef’s sampler), omakase, or a sashimi tasting. The sushi here features some contemporary flourishes, and the bill can feel very new-money too, so be prepared to pay top dollar (especially for the Russian uni… but really, it’s worth it). The sushi bar is a small one—just seven seats—and the entire space only has 38, so read on for how to nab a seat at this reservation-only spot.

Mitsunori “Nori” Kusakabe gained many fans during his years at Sausalito’s adored (and Michelin-starred) Sushi Ran, and now he’s running his own show in the Financial District—and has earned his own Michelin star there. The space is chic and minimalist, full of blond wood and sporting a long counter (with the most coveted seats in the house). The omakase menu is kaiseki style, focusing on the seasons and harmony of flavor, and includes some unexpected cooked dishes too (turtle, anyone?). The menu is elegant, inventive, and the sushi is top-notch, each piece cut and seasoned by his deft hand. You can tell Nori what kinds of fish you like at the beginning of the meal, and supplement your prix-fixe with seasonal nigiri selections off the à la carte menu. Reservations are notoriously hard to come by, but that’s where we’ve got the inside line.

There has been some sushi chef turnover at this chic Mission spot since it first opened, but things seem to have stabilized with chef Shinichi “Sam” Kawaguchi. His sushi-making experience spans over 40 years, and he specializes in traditional Edomae-style, so don’t expect any modern flourishes or anything more than shoyu on your nigiri. They offer a true omakase menu here, and it changes completely due to the chef’s whim—it’s the recommended way to go for nigiri lovers once you settle into your spot at the cypress sushi bar.

Michael Mina partnered with Ken Tominaga of Rohnert Park’s famed Hana on this Financial District high-end and modern izakaya and sushi bar. Score one of the 22 seats at the sushi bar, and you’ll be under the careful attention of the talented Yoji Harada. There’s an option to do a sophisticated omakase tour, which includes eight courses (with a shabu-shabu course) and 16 kinds of fish, or order by the piece. Consider trying the omakase on your first visit, because it includes Tominaga’s trademark Happy Spoon (oyster, ikura, uni, tobiko, and ponzu crème fraîche). Bonus: The sake pairings by Stuart Morris are some of the city’s most finely tuned.

This is the new secret, the latest fantastic destination that people (maybe, sorta, kinda) don’t want to talk about too loudly. And with good reason: This Inner Richmond sushi counter is as intimate as it is excellent. Atsushi-san and Tomo-san run the cozy counter smoothly, turning out two different omakase menus: the seven-course menu with a variety of dishes, and the omakase nigiri, built for the true nigiri fans (you get 12 pieces). The room is understated and modern, and the friendly staff really builds a welcoming atmosphere. You may have just found your new favorite.

Marcia Gagliardi is the founder of the weekly tablehopper e-column, covering the San Francisco dining and drinking scene (and beyond); subscribe for food news and gossip at tablehopper.com. Follow her on Twitter: @tablehopper.