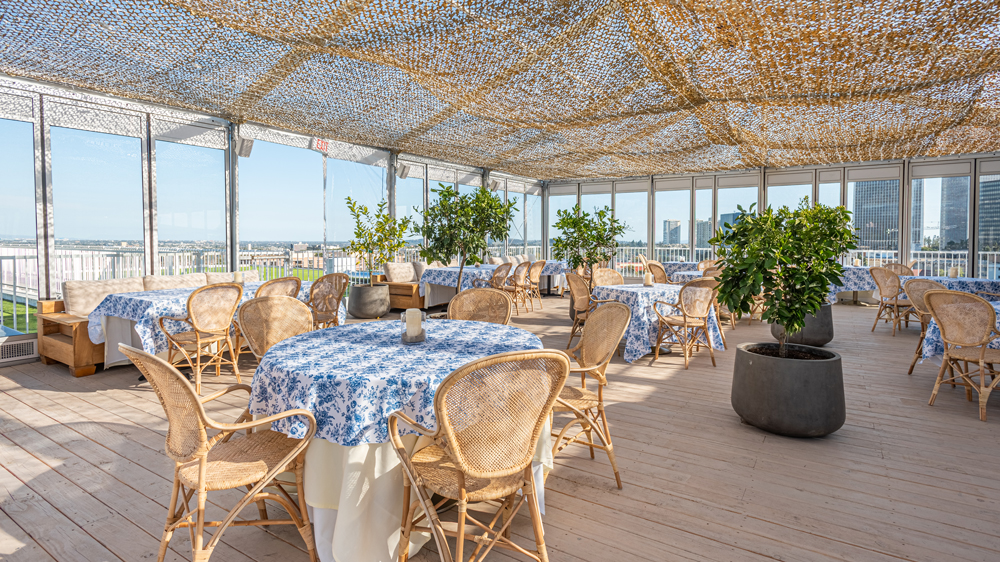 The distance from Burt Bakman’s Studio City backyard to the Beverly Hilton is only around six miles as the crow flies. But the rooftop of the famed hotel feels a world away from where Bakman launched his restaurant career. The Israeli immigrant became known for serving some of the best Central Texas-style brisket in LA under the moniker Trudy’s Underground Barbecue, all while holding down a day job as a real estate broker. Four years later, he’s part of the chef team behind Sant’Olina, a Mediterranean restaurant popping up in Beverly Hills.

Trudy’s became something of LA lore the latter half of the last decade. People gathered around Bakman’s offset smoker on a trailer parked at his home to sample Texas brisket he served from behind a well-worn plastic folding table. It became too popular, actually. “I was trying to become a citizen, and I was really I was worried about getting in trouble over brisket,” Bakman says. That’s where John Terzian and Brian Toll’s H.Wood Group came in.

For years the duo was known for its hit LA night clubs like Bootsy Bellows, but has moved more into dining, with its clubstaurant Delilah, red sauce restaurant and bar Nice Guy, and more recently the semi-private Mason. They partnered with Bakman to create Slab in 2018, a place where the Trudy’s originator could serve his barbecue on the up and up in the heart of LA.

After focusing on barbecue for years, though, Bakman found himself wanting to dip into the flavors of his past more. At first, just for himself and then growing from there. “I found myself several times in the barbecue restaurant hungry and just couldn’t eat any more barbecue or any more sandwiches,” Bakman says. “And I’d cook at food festivals and events and I tried to sneak in more Israeli and Mediterranean food that I grew up eating. I knew it was time to do a Mediterranean thing.”

So Bakman called Terzian and Toll with the hopes of getting a new restaurant off the ground. They looked at spaces, eventually checking out the roof of the Beverly Hilton in September. The hotel had used the space in the past, but not as a proper restaurant. With indoor dining restrictions, it became an ideal setting for a pop-up.

The menu, developed by chefs Michael Teich, David Johns and Bakman, draws from around the in and around Israel, while utilizing Southern California produce. “When you dig into the origin of dishes you realize one may not be Israeli, but Syrian, Moroccan or Yemenite,” Bakman says. Sant’Olina includes plates like carrots with matboucha, pomegranate, feta and mint or beet muhammara with walnut and cumin. But it also taps into Bakman’s past with the chicken schnitzel with fermented cabbage salad. “Growing up in Israel, just about every weekend I would stand with my grandmother and she would make me schnitzel,” Bakman says.

The restaurant is now open for dinner six nights a week, as well as weekend brunch. It’s currently a pop-up slated to last through Labor Day—and Bakman plans to savor the moment.

“I’m from a small town in Israel and if you would have told me that one day I’d be sitting the roof of my restaurant in Beverly Hills, I’d have thought you’re crazy,” Bakman says. “You know, anything can happen.”