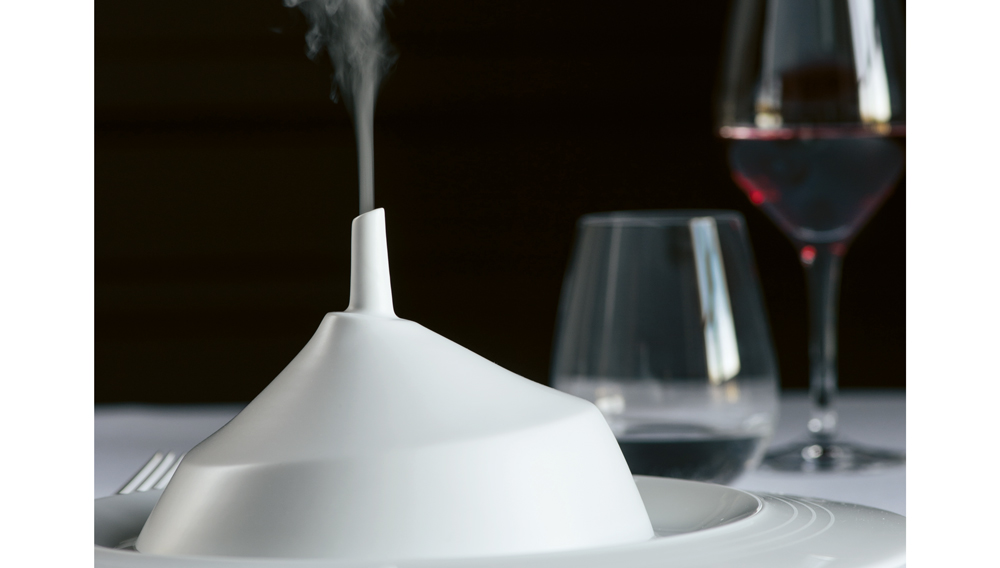 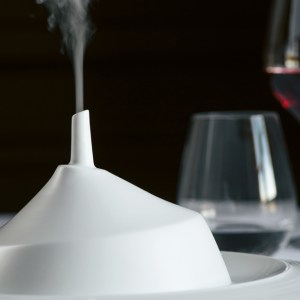 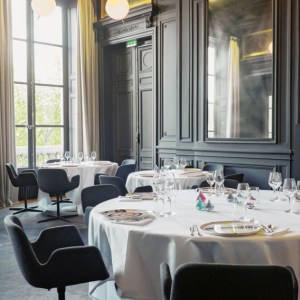 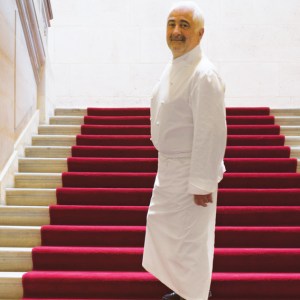 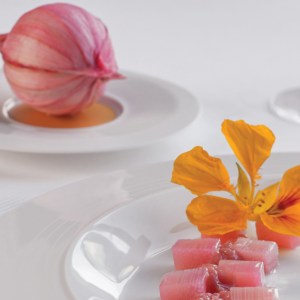 The culinary conjurer re-creates his Paris restaurant and its menus.

“Come see my beautiful new baby,” Guy Savoy says eagerly. The playful master of haute cuisine is standing at the top of a long red-carpeted stairway—literally at the pinnacle of a five-year effort to move his Michelin-three-star Paris restaurant to magnificent new quarters in the Monnaie de Paris, or Paris Mint. After 28 years in a rather bland location near the Arc de Triomphe, the new Guy Savoy now resides on the Left Bank, in a suite of high-ceilinged 18th-century salons that overlook the Seine. The reinvented eatery is the toniest the city has seen in years.

The dramatically quiet, charcoal-gray interiors by the Parisian architect Jean-Michel Wilmotte are filled with sophisticated decorative touches, such as a 1950s Stilnovo chandelier by Gino Sarfatti, bold contemporary art from Savoy’s personal collection, and pieces loaned by the father of his friend and customer François-Henri Pinault, the French luxury magnate. The overall effect explains why Savoy had his heart set on this location, even though remodeling the space, building the huge, light-filled kitchen, and finally making the transition took years to complete.

“Creative disruption is essential to the work of every chef, and I also think that it’s possible to outgrow a restaurant venue, or to decide you need something different,” says Savoy, who is 62. “Glamour, romance, drama, and most of all, a deep experience of pleasure—this is why people come to my restaurant. So I wanted a location and a look that would deliver that experience with even more intensity. And of course it was also the occasion to create many new dishes for the menu as well.”

These dishes are offered in a light three-course lunch menu, priced at $124, as well as in 12- and 18-course dinner menus, priced at $478 and $557, respectively. (An à la carte menu is also available at dinner.) Watching the Seine through the leafy crowns of the plane trees that shade the river’s stone-paved promenade amplifies the pleasure of the dining experience. “The Seine is really the main street of the city, even today,” Savoy says. “It’s also the city’s best show, which is why the decor of the restaurant was designed to be quiet, like a theater.”

Savoy’s cuisine has always been flirtatious, and the first hints of his signature playfulness appear in a series of provocative miniature hors d’oeuvres. These morsels include a grilled baby leek; a quail’s egg on a flan of baby peas; and finally, one of his new creations, a cellophane packet presented tableside and snipped open so that the cockles, clams, asparagus, and nasturtium flowers inside can be spooned onto a shallow plate.

Many Paris chefs are joining the locavore trend and taking an interest in sustainable agriculture and healthy eating, but few approach the practice with such good humor. Consider Savoy’s very original presentation of sea bass. The waiter displays the head of the fish tableside, then removes its succulent cheeks and plates them with the filet in a lightly seasoned aromatic sauce. As a final touch, the server garnishes the composition with a shower of golden, crunchy, deep-fried fish scales.

Every dish turns on a similar axis of delight, surprise, and sensuality—all the way through to dessert, which consists of an elegant pink pod made from dried ribbons of rhubarb and filled with a miniature scoop of rhubarb sorbet. After all, at Guy Savoy one never comes just to eat; one comes to be charmed and entertained. And with his new stage setting and menu, the master of culinary legerdemain delivers his most magical performance yet.