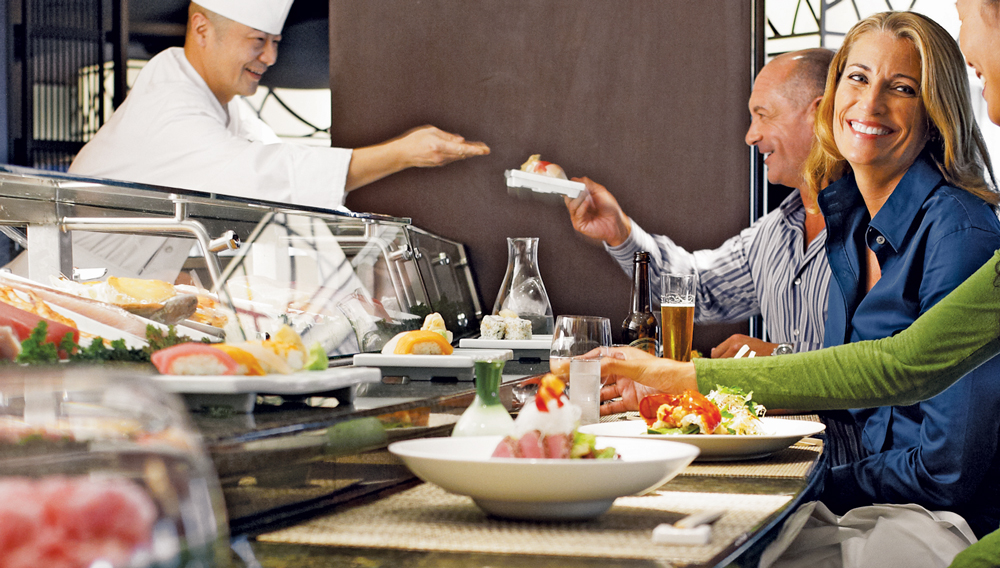 Having branched out from fine-dining establishments to food trucks, the world’s great chefs are now taking to the high seas. Cruise lines across the globe are adding celebrity-chef restaurants, culinary-themed sailings, food panels, cooking classes, and test kitchens to their itineraries at a brisk pace. Most recently, port-of-call excursions have begun to explore regional markets and other defining elements of the local food scene. “We focus heavily on local ingredients and the cuisine of each destination we visit,” says Toni Neumeister, vice president of food and beverages for Crystal Cruises.

Seabourn, however, scored a coup by persuading the Michelin-starred maestro Thomas Keller to sign on to its culinary program. His dishes for various venues on the fleet will debut late this year, and his signature restaurant, on Seabourn Quest, will open in spring 2016. The line’s dedicated food and wine cruises, which include a 2016 Taste of Asia journey from Hong Kong to Singapore aboard Seabourn Sojourn, further enhance its appeal to oceangoing epicures.

Crystal Cruises, a pioneer in bringing gastronomic greats aboard, features Silk Road restaurants by chef Nobu Matsuhisa on its ships Crystal Serenity and Crystal Symphony, whose passengers may dine on Matsuhisa’s black cod in miso or lobster in truffle-yuzu sauce. Crystal Wine and Food Festival sailings, which host wine experts, mixologists, and top guest chefs, also conduct culinary port-of-call excursions. Upcoming Wine and Food Festival voyages include a 12-day cruise from Istanbul to Rome in May 2016.

Oceania’s Riviera ship offers its gleaming Culinary Center, where cooking classes focus on ingredients from local ports of call, such as pistachios and saffron from Istanbul’s markets. The ship also features Jacques, an haute-French dining room helmed by Jacques Pépin, who will be cooking and leading demonstrations on a Venice-to-Rome cruise in November 2016. Oceania’s Culinary Creations Land Tours include romps though the wineries and brasseries of Provence and a three-night stay in Tuscany, where cooking classes will be held in a 13th-century villa.

Regent Seven Seas’ new all-suite Seven Seas Explorer, scheduled to set sail in July 2016, will fire the next culinary salvo. The liner will provide passengers with an array of luxury dining choices, as well as Regent’s first Culinary Arts Kitchen.