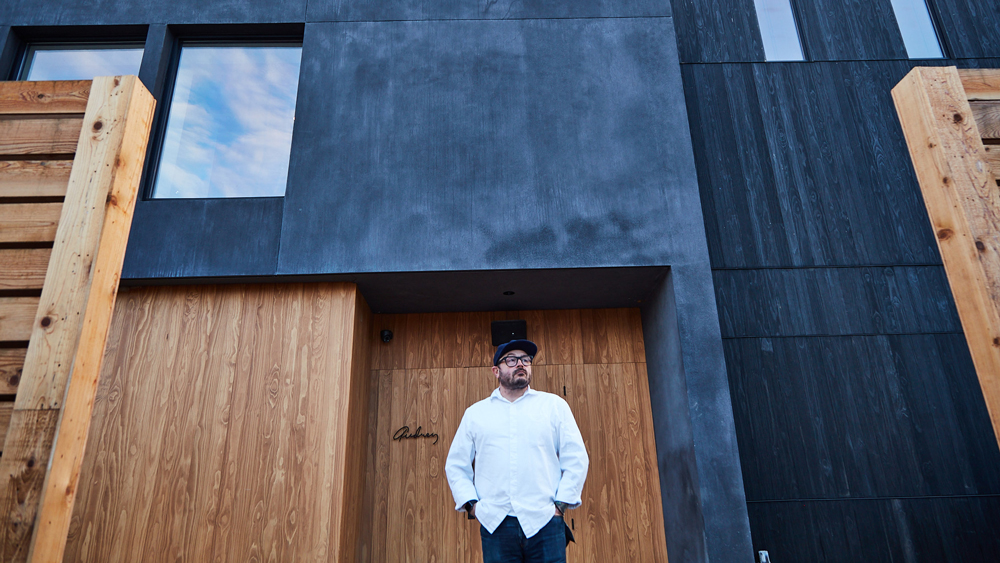 Chef Sean Brock finally has a name for his latest tasting menu restaurant, and he’s invited a slew of chef friends to Nashville for a dinner series to kick off the opening.

Previously known as “Red Bird” then later “Upstairs at Audrey,” the restaurant, located above Brock’s other tasting menu restaurant, Audrey, will open later this spring and be called June. Audrey was named after Brock’s maternal grandmother, Audrey, who is his biggest cooking inspiration; June is her middle name.

Brock—the chef behind Charleston’s Husk, one of the most influential restaurants of the past 30 years, and star of Chef’s Table Season 6—publicly parted ways with his many ventures in Charleston and regrouped in Nashville a few years ago to focus on his health and growing family. He has been slowly consolidating his efforts and opening bucket list projects ever since. That includes Joyland, a burger joint, and a revamp of the Continental in the Grand Hyatt Nashville. He just opened Audrey, his five-course flagship, in October.

Brock worked with a collection of local artisans on furnishings and decor for the space.  Photo: courtesy Emily Dorio

While they are inspired by the same Appalachian woman and share the same gusto for Southern cuisine, June will offer a very different experience than Audrey.

“When I left Husk and McCrady’s, I knew I wanted to build a casual Southern restaurant that focused on my upbringing in Appalachia, and also a very modern Southern restaurant that focused on the future of Southern food,” Brock said. “When thinking about ways to simplify my life and take better care of myself, I had the idea to put them in the same building instead of having separate restaurants in different parts of the city.”

June will offer a long-format tasting menu with several small bites in between courses, also known as “oshinogi” in Japanese dining. Brock will be heavily inspired by the kaiseki menu format as well as the menu format of avant-garde restaurants like El Bulli to present the dishes in unexpected ways.

“I was always so fascinated by how the Adrià brothers [Ferran and Albert, of El Bulli] paid no attention to the traditional tasting menu format and created an experience that you could only get there,” Brock said. “At June, we want you to sit down and have as many small servings as possible within a two and a half-hour time frame. The food and menu will be focused on the guests leaving refreshed instead of fatigued.”

The dining room at June is “very Zen and minimalistic,” showcasing lots of white oak and furniture inspired by George Nakashima, Brock says. He teamed up with the small Nashville studio Oil/Lumber for the design; the owner, Ethan, shares Brock’s “passion for Japanese woodworking, respect for the materials and the integrity of craftsmanship.” The restaurant is built around a stove handmade by craftsman Chris Demant, a longtime collaborator with Brock. And work by local artist Mary Mooney that makes Brock “feel at peace” fills the space.

Most notably, June is connected to Brock’s glass-encased, high-tech Research and Development lab. There, the focus is on flavor extraction and concentration, using products and ingredients indigenous to the American South.

“We want to explore the possibilities of our ingredients in ways that we haven’t been able to in the past,” he said. “We start by asking ourselves these questions: How far can we push the natural flavors of Southern ingredients? What traditions haven’t been discovered with our ingredients by focusing on creativity and curiosity? How can we push ourselves to concentrate the natural flavors so we can create and present dishes in a minimalistic fashion? How do we unlock hidden flavors by utilizing new technologies like our solventless extraction microwave and ultrasound extraction units?

When Brock ran McCrady’s in Charleston, SC, his tasting menu leaned on the principles of kaiseki.  Photo: Peter Frank Edwards

“I allow the ingredients and discipline to inspire me. Our creative process is very austere. We must first push ourselves to do something we have never done before or even witnessed elsewhere.”

To lead up to June’s opening, Brock invited some famous friends to town for a dinner series he’s dubbed the Nashville Sessions, which begins in March. Tickets go on sale this week.

“I want my first memories of this restaurant to be filled with the joy of cooking with people that I admire,” Brock said. “We always learn so much when we have visiting chefs. One of the great beauties of being a chef is sharing and learning with your community.”

And a bigger community is something Brock is craving—he hasn’t traveled outside of Nashville since March 2020.

“I’m in desperate need of camaraderie, inspiration and collaboration,” he said.

Brock said the series will be a sneak-peek into June’s cuisine, but he’s saving “a lot of the intricacies of the menu format” for the spring opening.

“I am so in love with spring,” he said. “It’s my favorite time to cook. Spring seems like the perfect time to bring June into the world.”