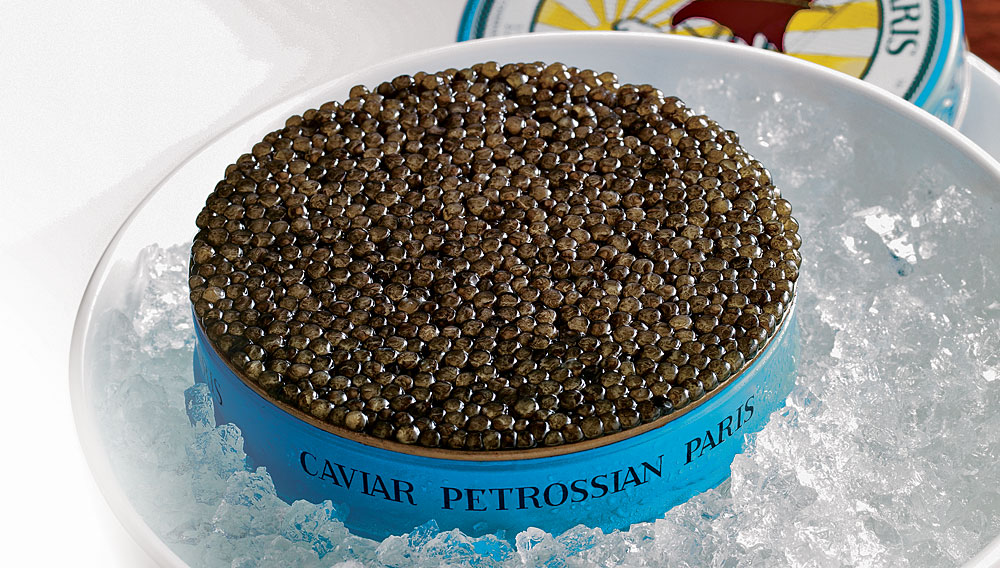 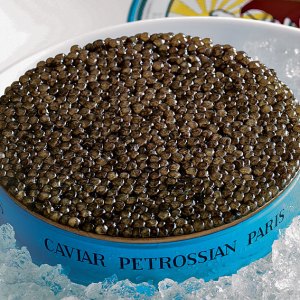 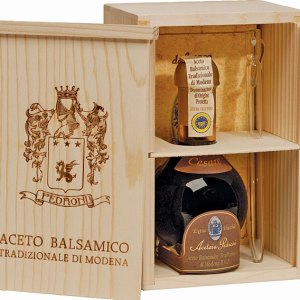 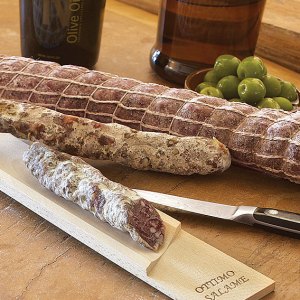 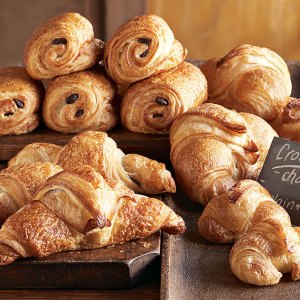 Nearly a century old, the Petrossian company (800.828.9241, www.petrossian.com) offers gourmet goods including foie gras, truffles, wine, and cheese. But the Paris-based purveyor has its roots in caviar, and it remains a leading source for the finest osetra, sevruga, white sturgeon, and other roe varieties. The Imperial Special Reserve Stellatus (shown)—sevruga caviar cultivated in the Caspian Sea off Iran—costs $617 per ounce.

Italo Pedroni’s great-great-grandfather opened a restaurant outside Modena, Italy, in 1862. Today, Pedroni runs the same restaurant while also producing a line of fine vinegars. The Pedroni family’s Affinato Tradizionale, Extra Vecchio, and Cesare balsamic vinegars are aged in wooden barrels for approximately 20, nearly 40, and over 60 years, respectively, and range in price from $140 to $480 per 100 ml bottle. The Pedroni Aceto Balsamico Tradizionale Extra Vecchio (shown)—available in the United States solely through A.G. Ferrari (877.878.2783, www.agferrari.com), for $240—is best used to finish dishes, but it can also be sipped neat as a digestif.

Napa Valley–based chef and TV personality Michael Chiarello launched NapaStyle (866.776.1600, www.napastyle.com) in 2000, and the company now offers everything from tabletop items and furniture to fine wine and gourmet foods. Among the latter are cured meats including a bresaola, Catalan salami, and prosciutto pâté. The Catalan salami trio shown here features a fuet with garlic, gray salt, and black pepper; a chorizo with sweet and smoked paprika, garlic, and sherry vinegar; and a fennel-infused salame dolce. The set costs $36 on its own, or $69 with a cave à saucisson—a storage cave with a curved top and grooves for cutting the meats.

Cream of the Crop

The Cowgirl Creamery (707.789.9433, www.cowgirlcreamery.com), located about an hour north of San Francisco, produces fewer than six varieties of cheese at any given time. The company’s signature Mt. Tam (foreground) is a triple-cream cheese made with organic milk from the Straus Family Creamery, Cowgirl Creamery’s neighbor in the small town of Point Reyes Station. The cheese, which costs $15 for an 8-ounce wheel, offers hints of white mushroom. Also shown is Cowgirl’s springtime St. Pat cheese, which comes wrapped in nettle leaves and has a smoky yet refreshing flavor.

Jean-Yves Charon began working as a pastry chef at the age of 16 and has honed his craft in kitchens in London and in Paris, Brittany, and Rennes, France. His plain and chocolate croissants—which are rolled and folded by hand and shipped frozen to be baked at home—are available exclusively through Williams Sonoma (800.541.2233, www.williams-sonoma.com) for $40 for a box of 15 regular-sized croissants or 24 minis. Leave them to proof overnight and then brush lightly with an egg wash before baking to give them an appetizing glaze.

Founded in 1821, Luxardo (www.luxardo.it) moved from its home in Zara, on Italy’s Dalmatian Coast, to the Veneto region after the destruction of its factory during World War II. The company’s portfolio of liqueurs and gourmet foods includes maraschino cherries produced from a 200-acre marasca-cherry orchard in Veneto. Priced at $19 per 12.7-ounce jar, the cherries are great in cocktails and as an addition to baked goods.

Diamonds in the Rough

The winter Périgord black truffle is named for the season when it is harvested, the former province of France where it grows, and the color of its exterior. These days, however, a few companies have begun raising the truffle in new locales by planting acres of the oak trees among whose roots the fungus grows. One such company, Black Diamond French Truffles, planted 10,000 trees in North Carolina in 2006 and now sells its “black diamonds” for $800 to $1,500 per pound through Susan Rice Truffle Products (866.678.2338, www.susanalexander-truffles.com).

Unavailable in the United States until 2008, Ibérico de Bellota is one of the world’s most coveted cuts of meat. The swine from which the bone-in ham is produced must be at least 75 percent black pig, a species found in parts of Spain and Portugal. The free-range pigs used for Ibérico de Bellota are fed an all-acorn diet, giving the meat an oily, nutty flavor that develops during two years of aging in the mountains near Salamanca, Spain. The Spanish-food importer La Tienda (800.710.4304, www.latienda.com) offers Ibérico de Bellota both sliced ($50 for 4 ounces) and whole ($1,400 for approximately 8.5 pounds).

In addition to overseeing 10 restaurants, New York–based French chef Daniel Boulud produces gourmet items including the delectable smoked Scottish salmon shown here. Brined in a solution of French sea salt and delicately smoked with Maine birch wood, the salmon has a bold flavor and an elegant texture. It is available exclusively through Browne Trading Company (800.944.7848, www.brownetrading.com), at prices ranging from $23 for 8 ounces to $95 for a sliced side.

Debauve and Gallais (212.734.8880, www.debauveandgallais.com) opened its first chocolate shop in Paris in 1800. The company’s Pistole de Marie Antoinette chocolates—originally created by Sulpice Debauve for the French queen—cost $200 for 1.7 pounds. The chocolatier also offers a range of truffles and bonbons, including Le Livre, a collection of 35 ganaches and pralines presented in a gold-embossed leather case in the shape of a book that commemorated the company’s bicentennial in 2000.