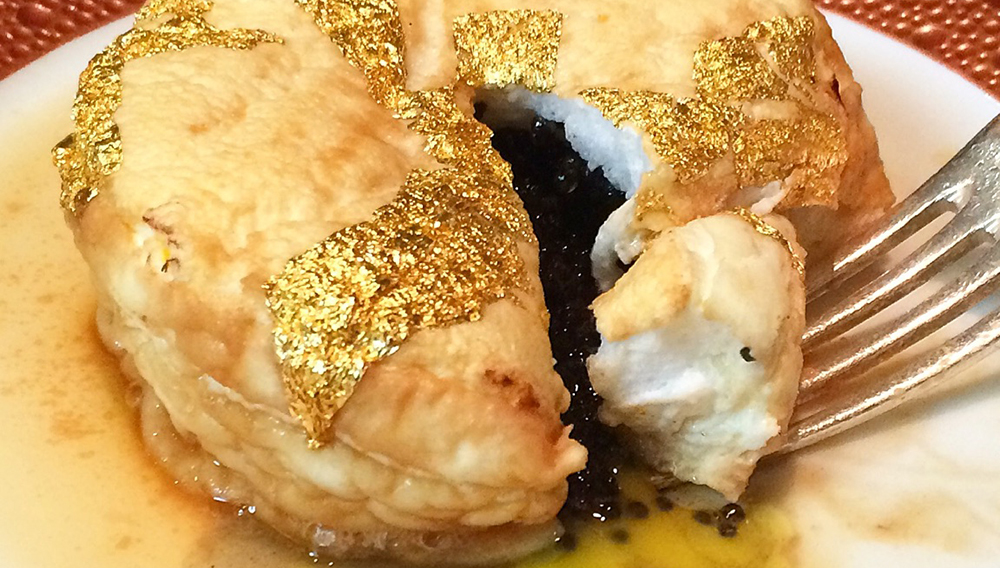 For those who are impressed by the finer items in life—think good caviar and seriously aged Cognac—and don’t mind shelling out for them, there is a new dish in New York City to try.

Petrossian’s “Secret Soufflé”—so called because it’s an off-menu item—is a sizeable soufflé containing about 30 grams of Royal Reserve Ossetra caviar (Petrossian’s priciest variety) and quail eggs in the center, and topped with a mosaic of gold leaf. It’s ferried to your table covered by a glass cloche to contain the applewood smoke in which it’s been marinating since leaving the oven minutes earlier. A bottle of Richard Hennessy, a Cognac that retails for about $3,500 and includes in its blend some spirit dating back to Napoleon’s time, is brought out on its own rolling trolley; about 2 ounces of the precious booze are flambéed in a saucepan and—while still aflame—poured over the decloched soufflé at your place setting. It is a spectacle that will almost certainly eclipse any foodstagram video you have ever posted.

Sure, it’s all a little over the top. But if you’re the type to order something like this, you likely don’t do restraint. The dish’s flavors, too, are similarly intemperate. Depending on the particular bite, the flavor of the Cognac—intense to begin with, given its age, and further concentrated by the flambéeing—often dominates but occasionally cedes the spotlight to the caviar’s brininess. (And the Cognac bath does nothing to enhance the soufflé’s meringue-like texture.) The applewood smoke, barely perceptible as we ate, lingered in our mouths for hours afterward, even through multiple cups of coffee.

Chef Richard Farnabe, Petrossian’s executive chef and the soufflé’s creator, admits it is a dish that exists simply because it can. It’s a tribute to 1980s-style excess, to the gilded glory days of when the restaurant was new. Farnabe was encouraged to experiment with no thought to cost, to use the most premium ingredients in as great quantities as he wanted. This was the result.

In a year that’s already seen a $180 bowl of ramen, a $1,000 gold-topped sundae, and a $150 platinum-encrusted donut (and that’s just in NYC), it almost no longer seems shocking that you can now order a $2,500 soufflé. As far as we’re aware, it is also the most expensive restaurant dish available in New York City that doesn’t come with a piece of jewelry. Is it worth it? Well, given the choice, we’d probably instead belly up to the bar at Petrossian and order a bottle of Krug, a few ounces of the Royal Reserve Ossetra, and a dram of Cognac, and pocket the price difference. But that wouldn’t make for nearly as good a story at the next cocktail party. (petrossian.com)