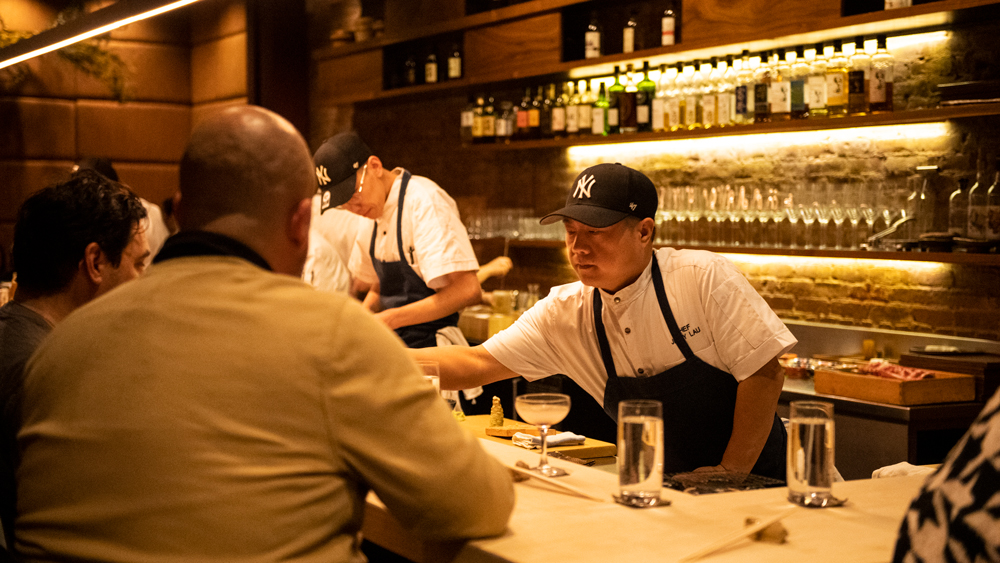 Shuko is a New York City omakase wonderland that grooves to a different beat. While many high-end Japanese restaurants resemble temples, this downtown sushi bar feels more like a house party. Chefs Nick Kim and Jimmy Lau preside over a counter where the guys making you nigiri might be wearing New York Giants or Yankees caps while ’90s hip-hop plays on the speakers. You might see casually dressed guests devouring the supplemental $118 grilled milk bread with toro, uni and caviar that David Chang recently Instagrammed. Another popular add-on is a riff on a spicy tuna roll with grilled toro and pickled Thai chiles.

And in-the-know visitors might also be eating a truly over-the-top off-menu spicy tuna dish. It’s a whole tuna collar, which can weigh 5 to 10 lbs and is covered with slices of pickled Thai chiles that could number in the thousands if you ask Shuko for a dramatically spicy experience.

“People who have been requesting it this summer tend to like it more on the spicy side,” Kim says.

Each collar, marinated in sake and soy sauce before it’s grilled, is an umami bomb of tender meat and luscious fat that somewhat tempers the intensity of the bird’s eye chiles. Every bite is a roller-coaster, a dopamine rush of anticipation, pleasure, trepidation and then pure exhilaration.

On the recent evening I ate the spectacular collar, it came with a bowl of rice and seaweed for do-it-yourself hand rolls. Shuko has also served tuna collars, which can easily feed four people, with congee and salad. Kim, who opened Shuko with Lau in 2014, knows it’s good to mix things up and give regulars different options.

Shuko typically serves the collar, which comes from 400-to-700-lb fish, three times a week because that’s how often the restaurant gets shipments of bluefin tuna (about half a fish at a time) from Spain. Guests can pre-order the collar by calling the restaurant. Expect to pay $90 or more, depending on the collar’s size, in addition to the $228-per-person omakase.

Kim and Lau met when they were head chef at sushi legend Masa Takayama’s Masa and Bar Masa, respectively. Then they ran the marvelous Neta together before raising the stakes at Shuko. They are rightfully recognized as two of the top sushi chefs in the United States, but they are also two chefs on their own path. Neither is Japanese: Kim, the child of Korean immigrants, was born in Los Angeles, while Lau is from China’s Fujian province.

The food at Shuko “starts with the idea of how Japanese cooks would approach it,” Kim says. “From there, other parts of our experience throughout the years come into play. It’s sometimes a little bit tricky because once you come out of the box, you can go a little too far. I think we make sure we don’t go out too far from the box.”

So as free-spirited as Shuko is, the restaurant is also about tradition and honoring the past. The idea of Shuko’s tuna collar was born in Los Angeles, when Kim worked at Takayama’s Ginza Sushi-Ko and saw how that top-tier restaurant got whole tuna and utilized every part of the fish it could.

Similarly, Shuko also serves an off-menu tuna rib, which is actually a tuna backbone. Guests use chopsticks and an abalone shell to separate the raw fish (topped with wasabi, scallions and sesame seeds) from the vertebrae and build their own hand rolls. This costs about $80 and up. Like the tuna collar, it’s a delightful way to make your sushi dinner more festive and communal.

The best way to learn about Shuko’s off-menu items is just to be an enthusiastic customer. In a room full of VIPs buying expensive meals, curiosity and joy are distinguishing factors.

But for people Kim knows well (like his accountant) and some especially fervent customers, there might be an exceptional piece of toast that’s more elaborate than the grilled milk bread Chang posted. Maybe there’s some shiro ebi (baby white shrimp) and gold leaf along with the requisite toro, uni and caviar.

Like they did at Neta, Kim and Lau have attracted a discerning and high-profile crowd at Shuko. Jay Z and Beyonce. Front-of-the-house staff and chefs at restaurant heavyweights including Major Food Group and Eleven Madison Park. I remember eating at Neta with Ivan Ramen’s Ivan Orkin in 2012 and seeing Danny Meyer a few seats away. I tell Kim that the food he and Lau serve is clearly beloved by many restaurant-industry power players.

“Wow, those are very kind words,” Kim says. “I’m sure there’s people who are, like, not into it. But the ones you mentioned, it seems like, yes, they might be happy with what we’re doing because of how many times they come back. It’s always great when we have that unwritten, unsaid compliment. We tend to have a lot of industry people. I love seeing managers and cooks.”

Shuko, where you might hear Wu-Tang Clan and A Tribe Called Quest while you eat shima aji and kinmedai, has the makings of a New York institution. But a lot of its attitude and liveliness comes from Kim’s upbringing in Los Angeles.

“I just blame LA because it’s where I grew up,” he says. “It seemed like my entire life, it was all about the vibe. Any good thing or bad thing, there was always music in the background or in my head. I feel like Shuko is a very personal thing, like half of me in LA and half of me in New York.”

When his family comes to Shuko, it reminds them of Kim’s childhood, when he had the lights down low and the music turned up in his bedroom. So I ask Kim an important question. East Coast hip-hop or West Coast hip-hop? Kim laughs deeply.

“I have to say West Coast because I want to go back home one day,” he says.

In the meantime, Kim and Lau will continue to drop bangers in New York. Thanks to social media and word-of-mouth, Shuko has been getting many recent inquiries about tuna collars and tuna ribs. So the restaurant might add them to the menu in the near future.

Having to get more than three shipments of tuna a week “would be a good problem,” Kim says. “Once we get into some kind of rhythm, we could order more and be able to have it on the menu confidently without having to 86 it every day.”

And then it might be time to come up with Shuko’s next off-menu sensation.