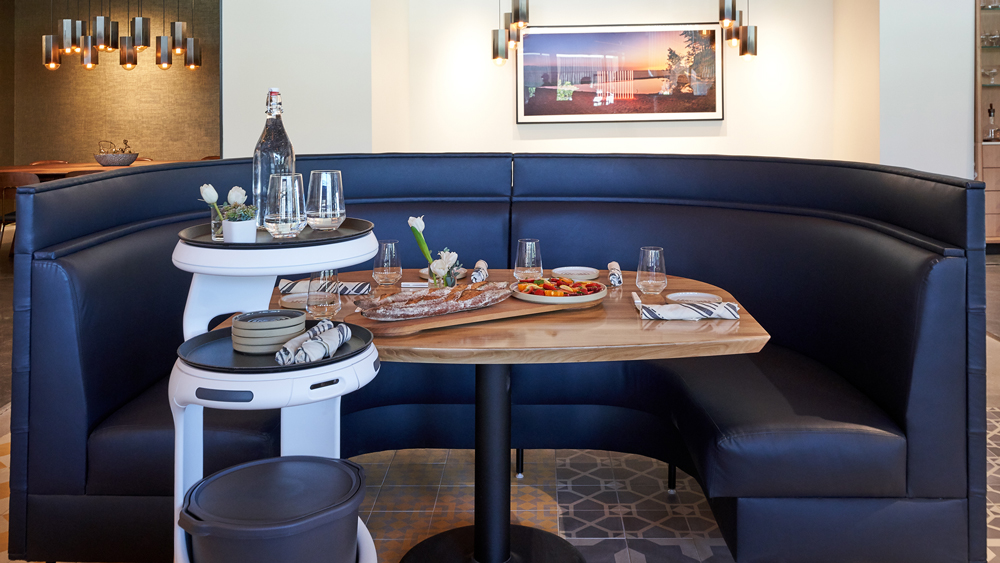 Back when I worked in restaurants after college, people could have fairly accused me of being a cold and robotic waiter. I’ve finally found a server more deserving of that description than me.

Inside the new Ameswell Hotel in Mountain View, Calif., the California-Mediterranean restaurant Roger opened with a pair of 75-lb. autonomous robots called Servi on the payroll and one more on the way. The restaurant—located a few miles from Google’s headquarters, as well as the NASA Ames Research Center—has used the 41-inch-tall robots since it opened a few weeks ago, but to this point doesn’t have them interacting with diners.

“These are meant to be serving robots, but I didn’t like that as a personal touch for serving,” Jacky Li, the hotel’s director of food and beverage, tells Robb Report. “We don’t want them to replace any actual staff. My goal was to make sure these are more an amenity for the staff to help with mundane things and [the waiters] can focus more on guests.”

So for the time being Servi, which as created by Silicon Valley company Bear Robotics, primarily serves as a busser at Roger. The two robots have stations in the restaurant where they’re parked, and when a server arrives with dishes from a table, they can give them to Servi, press a button, and it’ll head back to the kitchen where it delivers its payload to the dishwasher. “After the dishwasher unloads all the dirty silverware and dishes, he or she presses a button sends it right back, and then we just rinse, lather, repeat,” Li says of the robots they’ve leased. “The staff has been comfortable with them, because they’ve been helping them out—they don’t have to constantly run dishes to the back.”

Li says the hotel does have bigger aspirations for the Servis though. After some time, the Ameswell would like to deploy the robots for banquet events. They’ll be able to circulate hors d’oeuvres and drinks that revelers can grab as the robots pass by.

The Servis are not the only robots coming to the world of food. A few years ago, Daniel Boulud backed a Boston restaurant deploying robots as chefs. With labor tight, fast food joints are looking recapture their old glory by turning to Flippy, the French fry robot. And here in Santa Monica, Calif. residents have seen little delivery robots trundling down sidewalks, ferrying takeout orders from multiple restaurants in town to homes within a one-mile radius of the dining establishments. These two-foot-tall, 50-lb. robots from the company Coco are earth-bound piloted drones that were approved by the Santa Monica City Council a few months ago as a zero-emission, no-contact way to deliver food.

The Servi don’t function with pilots like the Coco robots, but are instead more like Roombas, mapping the layout of the space to smartly guide its journeys, which can last 10 hours without a charge. A technician from Servi came to Roger to help program the robots, and after they learned the floor plan, Li’s team got to work challenging them to give the staff confidence that they’d function as advertised. “We jumped in front of it, we put a chair right in front of it and it will always go around the object and around the people,” Li says.

And yet, Li acknowledges they’re still working out some kinks. If you manually move the robot out of the area it has already mapped, it can confuse it and Servi will start going where it thinks it should go, even if that’s far afield. On one occasion, a Servi was on its way back to its charging station and unfortunately, it made a left turn in front of the host stand instead of behind. When it missed its mark, it didn’t know to stop and just started rolling out the front door leaving the restaurant. “I was like, ‘Where are you going?'” Li remembers with a chuckle. “I thought, ‘Huh, well I guess the robot needs a break too.'”