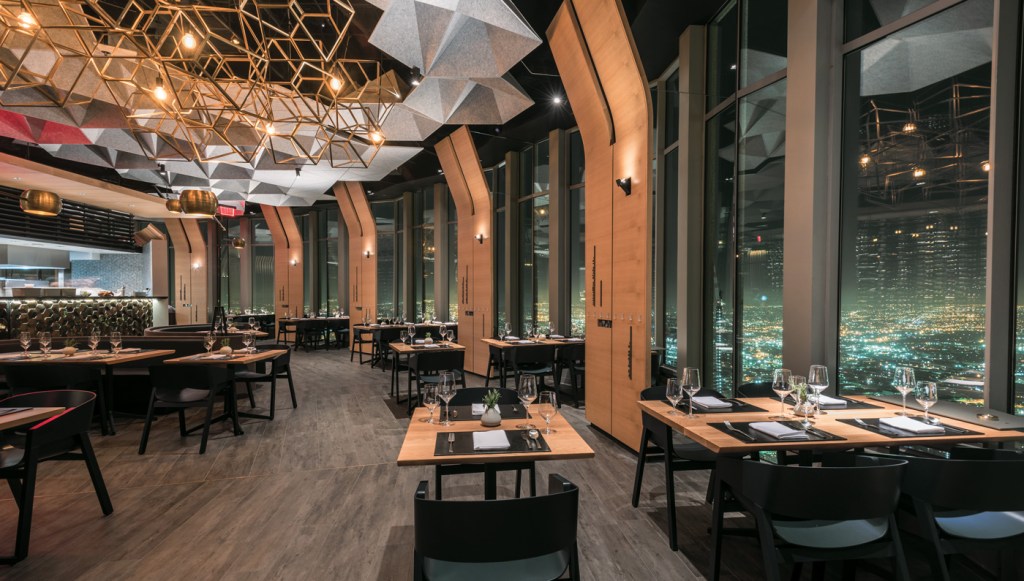 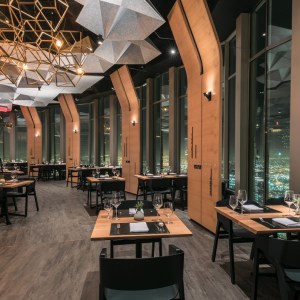 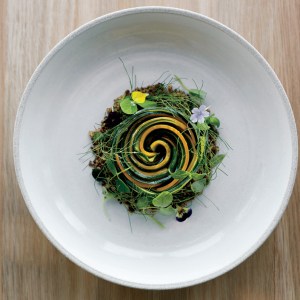 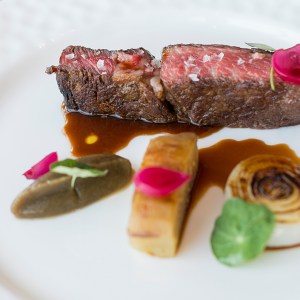 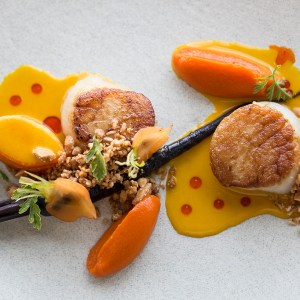 From a window-side table at 71Above (71above.com), diners can test their knowledge of Los Angeles geography, tracing ribbons of traffic to the San Gabriel Mountains, the Hollywood Hills, Malibu, Anaheim, and beyond. If you lose your sense of direction, a built-in tabletop compass will help orient you from your 950-foot-high downtown perch, while a guided prix-fixe menu (from $70 per person) will usher you to a magnificent meal of New American cuisine.

Since its debut last year, the 71st-floor restaurant has thrust Vartan Abgar­yan, the ambitious young chef and partner, toward the height of his career while disproving the notion that one must choose between a first-rate dinner and a good view. Patrons are greeted with warm, contemporary interiors punctuated by mirrors, polished white oak, gold accents, and a striking hexagonal ceiling; floor-to-ceiling windows expose the humming city outside.

To begin, an enticing amuse-bouche—say, a crispy gou­gère of Gruyère by pastry chef Gregory Baumgartner—awakens your appetite before three seasonally driven savory courses take the wheel. Choose from such starters as Champagne-poached oysters with fresh uni and tarragon-topped osetra caviar or velvety squash panna cotta spiked with sage-traced shichimi and pomegranate. The selection of second courses ranges from elevated classics—think truffle steak tartare with a farm-fresh yolk—to modern musings, like a duck-fat-roasted whole parsnip with date puree, rosemary, pistachios, and strained yogurt. The entrées are equally tempting thanks to Abgar­yan’s tasty surprises: A deconstructed suckling pig offers loin and belly cuts with the addition of a crispy dark-meat fritter that becomes the star of the plate. His tender young chicken breast, whose golden-crisp skin hides a bed of foie gras and black-truffle shavings, convinces one that all chicken should be served this way.

After the meal, immersed once again in the rivers of automobiles that looked so beautiful from the 71st floor, the high of dining so far above the City of Angels lingers on.