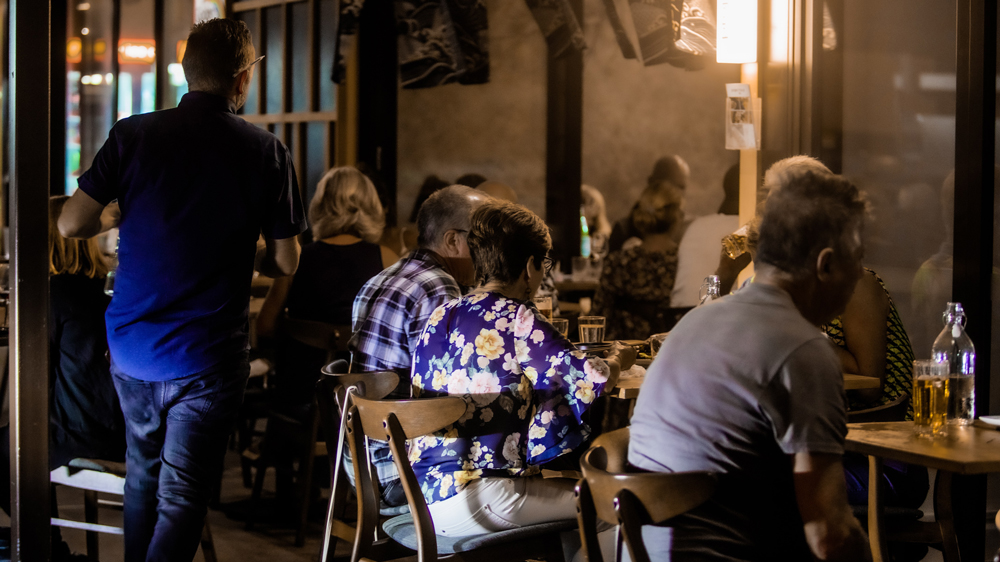 Last Saturday night, on the way to pick up some takeout, I noticed the pre-pandemic dining hotspot of Los Angeles’ West 3rd St felt alive again. All the telltale signs were back: Traffic was annoying, parking was crappy and sidewalks were blocked by people spilling out of restaurants waiting to be seated. Nature was healing.

As I weaved between people on the sidewalk, I could imagine I was in a world where there wasn’t a global pandemic. And that was part of the problem. I peered into restaurants and noticed that people were packed into back-to-back booths with no partition between them. Sure, some of the tables were more spaced, but the places still looked above the 25 percent capacity. I had visions of a Super Bowl of yore, when big ol’ Dallas Cowboys defensive lineman Leon Lett recovered a fumble and trundled the length of the field for what looked like a rare moment of sporting glory for a man of his considerable stature, only to celebrate a few yards too early and have the Buffalo Bills’ Don Beebe knock the ball right out of his hands just shy of the goal line.

The pandemic hasn’t gone away. And as crushing as it is to imagine more months of social distancing and decreased indoor capacity, restaurants, governments and diners need to not celebrate before we actually get into the end zone.

This may come off as a bit of Eeyorism. The holiday surge the country experienced in terms of both new cases and deaths has abated. New cases per day have dropped from their January peak of around 250,000 to about 55,000 currently, with the seven-day rolling average of deaths falling from nearly 4,000 per day to 1,000. And there’s also a surge of optimism as vaccine efforts, which stumbled out of the gate, continue to improve. So why not go out and dine with friends and celebrate?

The problem is we’re so close, but not quite there. While those averages have fallen, they’ve plateaued over the past few weeks after the precipitous drop. And we’ve stagnated at levels deemed unacceptable enough last fall that they led to lockdowns. This time around, this all comes as government entities are easing restrictions, like Texas dropping its mask mandate with Indiana turning its mandate into an advisory. And indoor dining capacities are going up across the country, with New York City and Los Angeles eyeing further lifting of regulations.

The alarm bells are ringing but people don’t want to listen. Public health officials in Michigan have been concerned by a 300 percent month over month increase in new cases. And Chicago’s commissioner of public health, Allison Arwady, announced in a briefing this week that a 23 percent surge in new cases in the last seven days has left her “really worried.” Dr. Anthony Fauci warned on Wednesday that the United States, despite progress on the vaccine, has not turned the corner on the pandemic yet.

The concern is not just another surge in cases, but accelerating the growth of variants that could be more contagious, harmful or even evade inoculation. Holding out on ramping up the economy for a few more months would buy time for the vaccine to be administered and tamp down the virus so it can be not as crippling to society in the future.

“The continued relaxation of prevention measures while cases are still high and while concerning variants are spreading rapidly throughout the United States is a serious threat to the progress we have made as a nation,” Dr. Rochelle Walensky, director of the Centers for Disease Control and Prevention, said at a White House briefing on Tuesday.

These are not arguments restaurateurs want to hear. They’ve shouldered the devastating effects of the shutdown orders for a year, gutting the industry. All the while, the government—at least until this latest stimulus package—had mostly left restaurants to fend for themselves. So they’re doing just that, fending for themselves. Industry leaders, like chef Marc Vetri in Philadelphia, have argued that they can safely reopen—both for diners and their staff. When And while I’ve observed many places doing it the right way, my experience with the activity on West 3rd last weekend was not an anomaly.

Closer to where I live, there has a been a restaurateur who has been a gadfly on the topic of reopening for quite some time. “This fusty old government needs to get out of the way because restaurants know how to handle diners safely,” has essentially been his line of attack. Of course, when outdoor dining was allowed again, I walked by this person’s restaurant, and there he was, sitting inside without his mask on and there was a young kid running in and out of the place without a mask either. And down near where there are hotels and more touristy restaurants, there have been diners crowded together on their makeshift terraces. We can’t just assume restaurants are all following best practices, because it’s clear not all of them are.

And though this request may be made in vain, restaurants need to stay vigilant about following safety protocols, municipalities have to enforce regulations and governments should slow down reopening for a brief period of time. And diners, don’t make restaurant staff have to harangue you about your masks, keep your distance and tip well. We’re almost in the end zone. Don’t fumble this away.