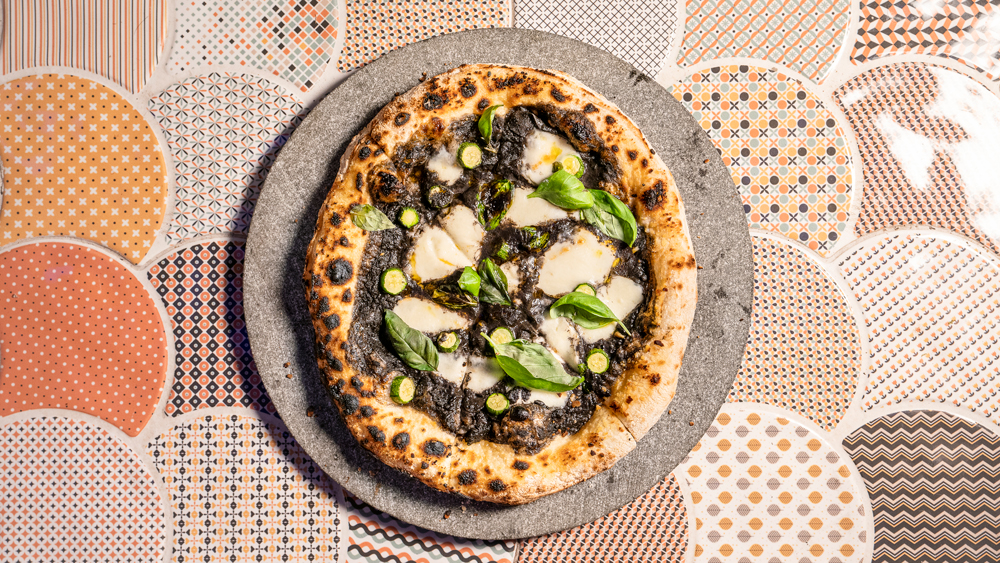 Big dreams can come in small packages. For Singapore chef Bjorn Shen, that means a six-foot-wide room where he can unleash his wildest ideas.

Shen is the chef-owner of Artichoke—a contemporary, Middle Eastern-inspired hotspot—and a local celebrity (a TV regular and judge on MasterChef Singapore). Since opening in 2010, his funky flagship restaurant has demonstrated continued resilience, earned numerous accolades and gained a fiercely loyal following. This year, Artichoke will celebrate its tenth anniversary—quite an accomplishment in Singapore’s dynamic dining landscape, where countless eateries open and shutter in a matter of months.

But even bigger things, figuratively speaking, are on the horizon for the brazen chef who may be as notorious for his rebellious personality as he is for his eccentric style of cooking. This week, he will officially open Small’s—an aptly named, four-seat chef’s counter attached to Artichoke. Here, Shen will showcase an unconventional dining experience: pizza omakase.

“I had my first pizza revelation in Japan five years ago—a Neapolitan pie at a tiny, un-hyped shop in Osaka. A year later, I had my mind blown by Roman-style pizza at a fancy place in Tokyo,” Shen says. Those experiences sparked an obsession with pizza, and jump started the driving force behind his new endeavor.

So what can guests expect from a pizza omakase? “There’ll be a few starters, a bunch of pizzas in various forms and a couple desserts—a total of 10-12 dishes. It’s very private, and a big part of the experience will be my personal engagement with the guests—showing them cool ingredients like octopus bottarga, sea grape powder, etc.” He’ll offer the family-style meals three times a week for a group of four diners per night, beginning on February 1.

The menu is inspired by pizza joints of the ’80s (and Shen’s childhood experiences) and will feature fancier iterations of nostalgic items—like garlic bread, meatballs, lasagna, hot wings, Caesar salads, stuffed-crust and more. For example, maitake mushroom gnudi in a retro alfredo sauce as a reference to meatballs and a pizza aglio olio as a nod to garlic bread.

Southeast Asian ingredients accent the cuisine, such as plump, juicy sunset clams from Lombok Island in Indonesia on the pizza vongole, or a sprinkling of toasted sakura shrimp on the Caesar salad bagna cauda dip to add saltiness. Then there’s the pizza banh mi: “It’s like a giant sub made from pizza dough filled with lemongrass-rubbed Kurobuta pork steak, Vietnamese mortadella, pâté, pickles and a ton of fresh herbs,” Shen shares about his flavorful creation, which resembles an Italian style of pizza called pizza ventaglio, but with the unexpected twist of Vietnamese ingredients. “It’s one of my favorite sandwiches of all time.”

When it comes to making standout Neapolitan pizza, Shen stresses the importance of using quality dough. His high-hydration recipe, made from a blend of flours in a secret ratio, is cold fermented for three to five days before being cooked in a piping hot electric oven imported from Italy. The lengthy fermentation process imparts complex flavors and allows ample time for gas development—meaning good bubble structures under the surface of the crust. How does that translate to taste? “Well, it means that the crust will be puffy and light, with a good bounce; as opposed to being dense,” shares Shen. “Most commercial places make a quick dough that’s rested overnight so that they can save on fridge space, and I don’t blame them ’cuz I know that operations can really be hindered if you have a big seating capacity and you had to leave all your dough in the fridge for that long. But because I only serve 12 people a week, I can do these sorts of things that make little operational sense otherwise.”

The cozy space also reflects the chef’s out-of-the-box mentality. Each detail was curated to express his personality and cheeky sense of humor—from the glowing white and purple pendant light to the playlist of ’70s soul and “’90s baby makin’ slow jams” to multiple images of Borat giving an enthusiastic thumbs up to guests (great success!).

The biggest advantage of the tiny eatery is that Shen is able to boldly take risks and try new things. The concept, inspiration and menu can evolve and be completely transformed, bringing his constant stream of creative ideas to life.

Small’s is Bjorn to be wild. And we can’t wait to belly up.