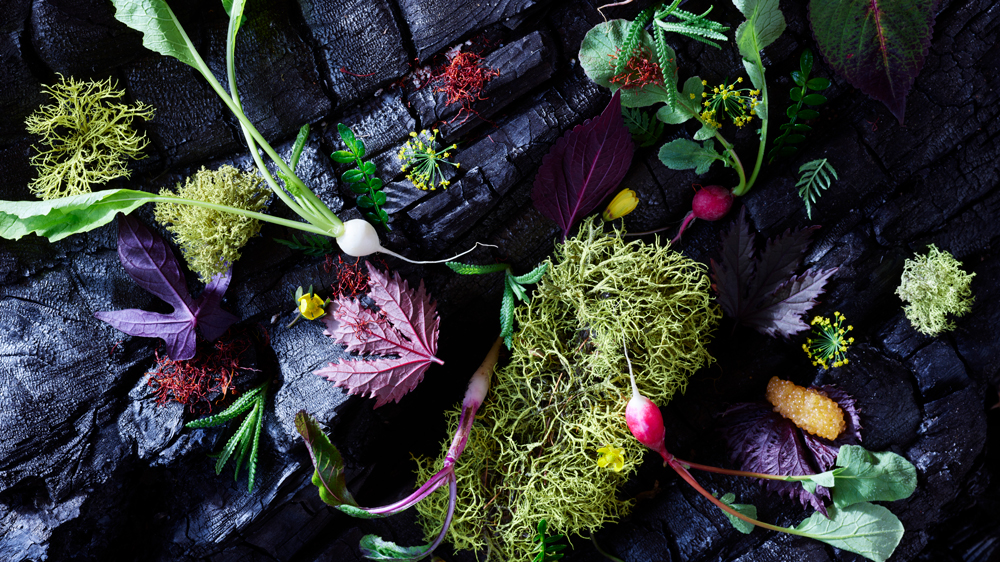 “Watch out for the rock. It’s very hot,” said Brandon Cunningham, executive chef of the Social Haus at the green o, a new luxury resort in Montana. In front of us sat a jet black stone plucked straight from the Blackfoot River flowing near the property, steaming and sizzling at 600 degrees. A plate with a generously salted, marbled piece of raw Hokkaido wagyu, toasted Japanese milk bread and caviar crème fraîche was placed next to it.

This is Cunningham’s immersive play on a Japanese sando, just one of eight courses served to us that night. Tomorrow, an entirely new eight to nine-course menu will be thought up, taste-tested and impeccably executed for a maximum of 24 diners by Cunningham and his team.

Set on 37,000 acres of rugged Montana wilderness, this may be one of the country’s most ambitious hotel restaurants and certainly one of the most exclusive.

Tucked in the wilderness.  Photo: courtesy the green o

The green o threw open the walnut wood doors to its 12 artfully designed standalone homes (called “Haus”) on June 23, 2021. With a nearly full resort during its first few months, Cunningham said, “I was nervous as hell leading up to the opening, but the response has been very overwhelming.”

A sleek, sister property to Paws Up, guests at the green o can ride horses and ATVs, fly fish or get a massage alongside those in Paws Up cabins, but only green o guests can dine at the Social Haus.

The meeting point for all meals, the Social Haus is marked by the resort’s illuminated logo. This circular symbol resembles the rings of a cut tree trunk and honors the property’s former rancher who tracked his sheep using a big green O, also influencing the resort’s name.

Inside is an open-plan dining room centered around a large circular torched copper fireplace. The dark green leather banquette seating forms a semicircle with views of the flames and the pine trees from the floor-to-ceiling folding doors. Custom-made high-top seating adds to the intimate atmosphere, as do the barstools along the large open kitchen.

Before and after activities, breakfast and lunch are a casual à la carte menu including classic dishes like the egg in a basket with cheddar mornay, country ham and pickled mustard seed on sourdough, all sourced within 100 miles of the resort. International dishes like crispy Vietnamese crepes with dungeness crab and a side of nước chấm, butter lettuce and herbs are a favorite among guests, but the star of the show is dinner.

“I thought about doing a standard standing à la carte menu, with maybe some specials, and that just didn’t speak to me whatsoever,” says Cunningham. “So, I just kind of rolled the dice and was like, alright, we’re going to change the venue every night. Our biggest thing is not letting the guest eat the same dish twice.”

Each menu has just two words per course, like “chestnut & raclette” or “ham & coffee.” “That helps us hone in on two ingredients and multiple ways to represent those,” says Cunningham. “And then it also creates a little bit of mystery at the tables. They have no idea what they’re getting.”

While around 90 percent of guests opt for the tasting menu every night, they can choose to order off a small à la carte menu by request. Cunningham also offers a pizza program with pies delivered hot to their Scandinavian-inspired haus or the dining room.

“People come here and I don’t think they have a lot of expectations as far as the food goes, and they end up just eating their entire trip,” says Cunningham. “It’s a huge compliment to me when all they want to do is keep eating the food and, so folks will end up ordering the pizza after dinner as well.”

Cunningham rose through the ranks from dishwasher to sous chef in Portland, Oregon, learning live-fire cooking at places like Ned Ludd. Permits allowing, he’s hoping to incorporate the excitement of an open flame into the dining room at the green o. “I thought about doing tableside cookery over an ember log. Maybe doing a fun fondue pot type of situation with a little coal keeping the pot hot.”

He and his team are also experimenting with making their house-made charcuterie and cheeses. “Right now, we’re sourcing local, which is a good step. But I want this to be as all-encompassing and all in-house as possible,” he says. “Looking into doing some dry-aging here as well.”

The green o is being lauded for its striking design, with cozy touches throughout, and its standout dining program. While Michelin hasn’t made its way to Montana, a James Beard award isn’t out of the question, but that doesn’t drive Cunningham.

“When it comes down to it, it sounds super cliche, but I promise you this, I never knew how important and how amazing it was going to be to get to know the guests,” he says. “They become more than acquaintances, and you’re more than a chef to them.”