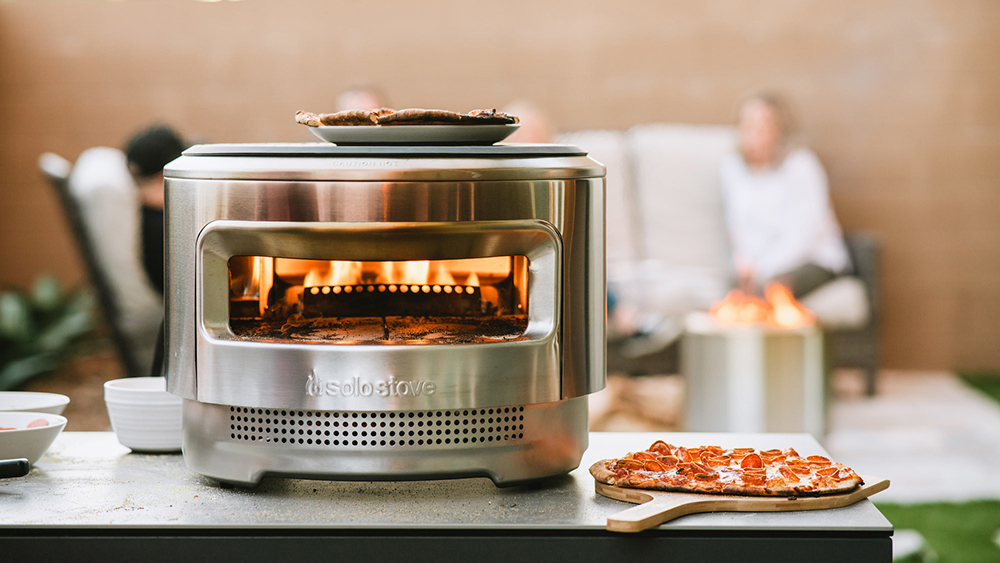 Fresh, piping hot pizza at a campsite sounds like a far-off fantasy, but Solo Stove wants to help make it a reality.

The Texan outfit, best known for its ingenious smokeless fire pits, unveiled a new portable pizza oven on Pi Day this week that can produce restaurant-quality pies from just about anywhere on the planet.

The aptly named Pi is a standalone stainless steel oven that can run on either wood or gas. Like the company’s camp stoves and fire pits, it’s engineered to bring the heat. It features an innovative Demi-Dome that directs hot air down to evenly warm the wall-to-wall cordierite pizza stone. The ceramic insulation, meanwhile, was crafted to maintain a consistent temperature inside the oven, which should result in seriously crispy pies.

Solo Stove claims Pi can cook a 12-inch pizza in just two minutes, and its makers think a home cook with their wits about them could fire out around three to four pizzas in an hour. As for overall cook time, the oven can run for roughly three hours on wood before the ash pan gets full. It also works with a gas burner that can be attached to a bigger LPG tank.

The best part is Pi can be taken off the grid. Tipping the scales at 30.5 lbs, the compact design won’t take up too much space when you’re camping, on a road trip, tailgating or on the beach. Its proportions—15 inches tall by 20.5 inches wide—mean that it can be easily transported and stored.

Pi can run on either wood or gas.  Solo Stove

“Solo Stove customers value experiences and gathering with friends and family, and it’s hard to think of a better meal to create and share than fresh, homemade pizza,” Solo Stove president Clint Mickle said in a statement.

Pi alone will set you back $425, but the oven can also be paired with accessories. The Starter Bundle ($510) comes with the oven, a pizza cutter, a peel and an infrared thermometer, while the ($750) Essentials Bundle includes all of that plus a gas burner. Orders are now open and deliveries are expected to commence in mid-May. Just in time for spring.