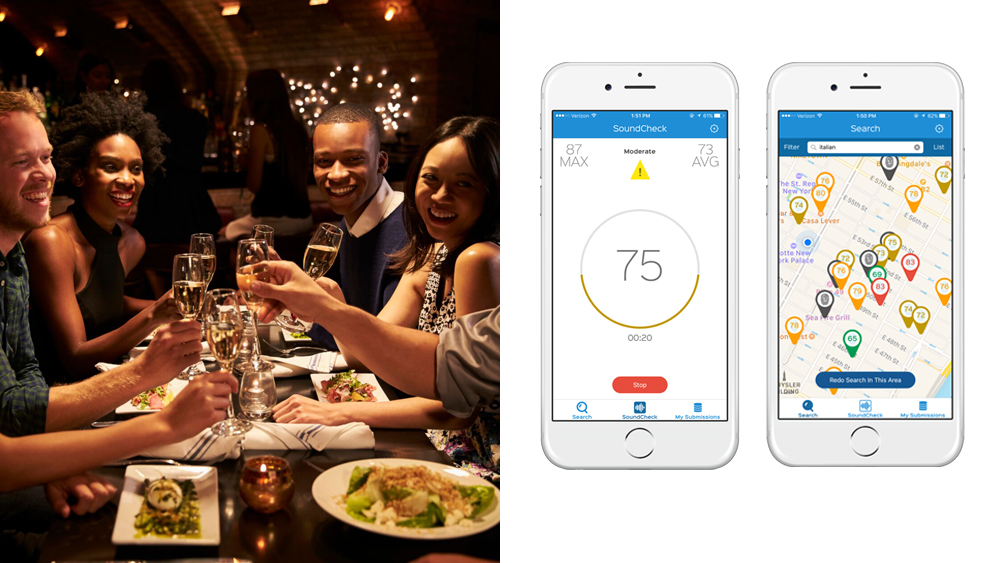 While dating in New York City, Gregory Scott noticed he had difficulty connecting with potential partners in loud restaurants.

“There’d be no chance for a good conversation to develop,” he recalls, adding that dating experiences at quieter restaurants were “100 percent better.” So he launched a business: Scott’s SoundPrint app has a built-in decibel reader, which crowdsources noise-level ratings at restaurants and bars and serves up “quiet lists” based on those readings.

“There’s a connection between noise and stress which impacts your whole experience,” says Catherine Palmer, director of audiology and hearing aids at the University of Pittsburgh Medical Center. “You think you’re going out for a relaxing meal, but it’s not relaxing at all. You’re feeling hurried because noise tends to make you move along. That’s not an accident—it does turn tables over faster.”

And more restaurants are coming around to the importance of acoustics, says David Schwartz, a New York acoustic consultant. The problem is that changing the noise level requires a series of treatments that are often more successful when a restaurant is being built, rather than quick fixes after the fact. But innovations like noise-absorbing plaster and acoustic panels disguised as wall art are helping restaurants quiet down.

So what’s too loud? The decibel scale is logarithmic, meaning that 75 decibels is exponentially louder than, say, 70 decibels. After analyzing data from over 31,000 restaurants, Scott says New York City, San Francisco, Toronto and Dallas have the loudest eateries, while the average American restaurant clocks in at 78 to 79 decibels.

We took decibel meters and apps to test the volume of restaurants in LA, London and New York. So here are our readings. We said, “HERE ARE OUR READINGS.”

If you’re looking to enjoy a date-night dinner or win a power-lunch negotiation, Scott shared his favorite whisper-quiet restaurants and their average decibel ratings.