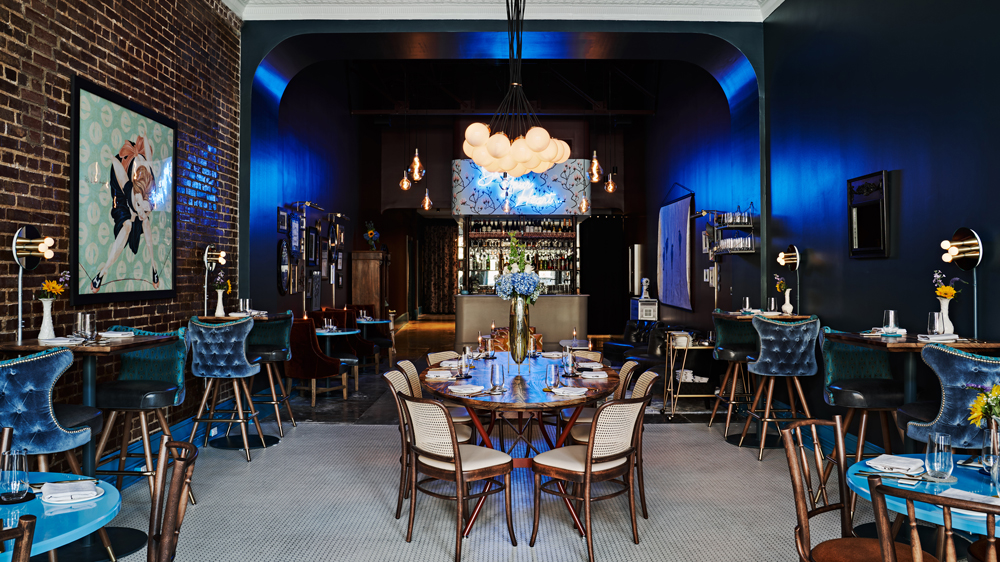 The point of a chef’s counter is to expose the kitchen to the diners, to bring the two sides together spatially and in conversation. But at a new restaurant in Atlanta, the act of coming together is a bit more clandestine.

“For years at Gunshow, I basically had two sides of how I would like to cook,” Ward said. “I would do things that were crowd-pleasers, with big, bold flavors. Things that made me smile and just tasted great. And then on the other side, there were things that were a little more intellectual and conceptual and that would provoke a response. There were still tasty, but also a little more avant-garde. I decided that it would be fun to do both, but in two separate experiences under the same roof.”

Diners enter both of the new restaurants through the 45-seat Southern Belle near Ponce City Market. The dining room here is comfortable, with tufted furniture, exposed rafters and original brickwork. Georgia Boy is accessible via a waiting area that resembles a study. Diners are invited to sip on a cocktail and snack on amuse-bouche before removing a copy of James and the Giant Peach from a bookcase to access the speakeasy.

“I want our guests to have an experience beyond just the food itself,” Ward said. “We want you to feel casual, like you’re invited to a dinner party, but still attended to. I want people to talk about it and remember it. It creates this sense of wonder and experience that transcends just eating plates of food; it’s more of like you’re in on a secret.”

On one side, the frequently changing menu at Southern Belle focuses on seasonal and big-flavored Southern small plates like beef short rib braised in Dr. Pepper, chestnut gnocchi with sunchokes and Szechuan-spiced sweet potatoes with tofu mayo. There is only one dessert: a warm, sticky toffee-coffee pudding with Biscoff ice cream, which is prepared tableside using liquid nitrogen from a Delta beverage cart. The drinks list, which incorporates natural wines and regional spirits like Cathead vodka, was designed by GM Cate Hatch and the team at Ticonderoga Club.

Georgia Boy showcases the chef’s other side. The minimalist space has eight two-top tables; only four seatings are offered a night, Wednesday through Saturday, of up to 16 diners at once. Patrons are served 16 courses over the course of the meal, which is full of the interactive theatrics and whimsy familiar to fans of Ward’s work at Gunshow. Dishes are thoughtful, immersive and multi-sensory.

One dish, “Fall is in the Air,” resembles a pile of foliage that is made from autumn vegetables such as sweet potatoes and pumpkins; hiding underneath is venison. An aroma of fall spices are released on the table using dry spices. The “Lick the Beater” dessert is all about nostalgia. The pastry chef dips vintage electric hand beaters into a vegan birthday cake batter and sprinkles. It gives diners an instant smile.

At Southern Belle, dessert is made on a Delta cart with those little cookies you get on its planes.  Photo: courtesy Andrew Thomas Lee

The tasting menu also has a fully vegan option.

“I saw some of the other tasting menus in town not [giving vegan options], and I thought there may be a niche there,” Ward said. Pastry chef Billy Cole, another Gunshow alum, is also vegan. “From a creative standpoint, it was a challenge to make something super satiating and delicious without using any animal products.”

One of the vegan dishes (which is also served on the omnivore menu) is called “Oysters and Caviar”; the chef piles lemon-flavored snow into a ceramic oyster shell and tops it with horseradish and a green oyster leaf, which tastes like a freshly shucked oyster. It comes with a jar of chilled, beluga lentils cooked in vegan dashi and seasoned with nori oil. You gently scoop the faux caviar out using a mother of pearl spoon.

The main course, “Meat is Murder,” is a beef short rib made completely out of mushrooms. Pickled beets are pureed and dragged onto the plate to resemble blood splatter. Ward says it terrifies people.

The tasting menus will both be updated twice a season.

“In Southern Belle, we’ve got free reign to change the menu as much as possible, and that’s going to be hyper seasonal, just reacting to the farmers,” he said. “It’s more of a rehearsed dance in Georgia Boy. We need to get the dishes down so that we can keep our timing.”

And Ward wants his restaurants to have zero food waste. His kitchen is turning scraps into drink garnishes and independent dishes—like fermenting leaves into kimchi—and repurposing surplus ingredients into meals for the needy. The chicharrones at Southern Belle, for example, are made from dehydrated vegetable skins. And while they donate a lot of scraps to a composting service, he’d prefer to cut that step out as well.

“It literally goes back to our farmers, which is great, but you’re essentially making garbage,” he said. “You’re not feeding your body with it directly yet. If we could put in a bit more effort to turn something that would just go to the ground into somebody’s belly, then that seems to make it worthwhile to me. And it stimulates the staff to be thinking outside the box, which is always something I’m a fan of.”

On “Sunday Fundays,” as the chef calls it, the staff throws a party on Southern Belle’s back patio. They have live music, food grilled on a Big Green Egg and a keg of beer from Creature Comforts Brewing Co.

“We take the food and the experience very seriously, but we don’t take ourselves too seriously,” Ward said. “We’re having fun. I wholeheartedly believe that we have one of the best jobs in the world: We get to throw a party for 80 or so strangers every single night.”

Reservations are currently available on Resy.