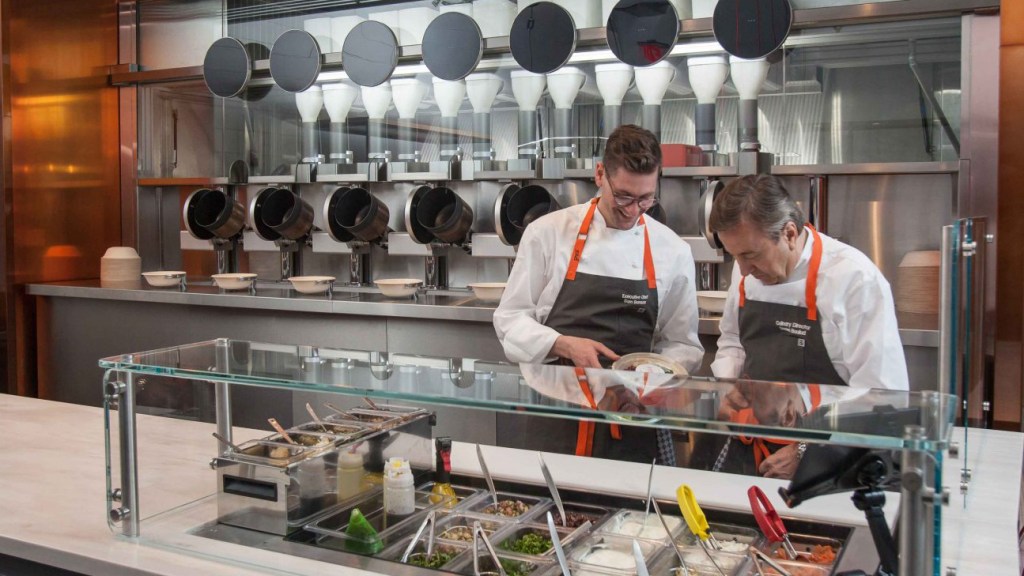 At Daniel Boulud’s eponymous restaurant in Manhattan, a brigade of chefs works in unison every night to cook Dover sole with green asparagus or roasted veal tenderloin with a gorgonzola emulsion.  The artfully crafted dishes call to mind the old Julia Child quote: “It’s so beautifully arranged on the plate, you know someone’s fingers have been all over it.”

This quote does not apply to Boulud’s new venture in Boston, Spyce. Four MIT robotics students approached the legendary chef with an idea of creating a restaurant in which robots—not chefs—make the food. Impressed with the technology the MIT guys showed him, Boulud became an investor and culinary director. Boulud also recruited the chef who would create the recipes for the machines to execute.

Michael Farid, Brady Knight, Luke Schlueter, and the aptly named Kale Rogers came up with the idea as broke college students wanting better food for less, thinking the robots could save on costs while still allowing for customization of dishes. At Spyce, which opened this week, there are seven woks heated with magnetic fields arrayed across the wall. Above the woks is a robot on a track that collects ingredients and then puts them into the proper pot, which tumble to cook them, with the whole process taking three minutes.

Customers order at a touch screen that allows them to customize grain bowls created by chef Sam Benson, who used to work for Boulud as executive sous chef at Café Boulud. You can mix and match ingredients, but Benson has had the engineers build into the system programming that blocks certain ingredients from some bowls to make sure that you get what you want, while ensuring that you’re not making anything Benson would deem gross.

People will tolerate a level of automation in their lives, trading some quality for convenience. AT Starbucks, for example, the baristas are not really baristas, but just people pushing buttons that start automated processes. In many of these chain fast food jobs, where it’s all cook by numbers, humans are trained to perform like robots without agency anyway. And this restaurant is limited in its cooking techniques. “I had to apply basically one cooking technique to everything, which is roughly sautéing,” Benson told Grub Street. But something still feels a little off about the endeavor.

“We designed our systems to make them complementary to our worker,” Farid says. “The robot takes care of the hard work, the hot work, the washing, the cooking, which enables our employees to focus on the really really great stuff that people do like customer service and making them feel welcome. There’s a human element that’s critical that will never really go away.”

Yes, service is very important, but Farid’s answer and technology seem to discount the human element in cooking itself. When a restaurant uses commodity, factory-farmed ingredients that ensure uniformity, the methods used to cook it can be uniform. But cooking at its highest level—the kind done in Daniel—require a human touch because of the number of variables going into cooking. What if the tomatoes today taste different than the ones used from the market the previous day? That will only be known because a chef tasted it, and then adjusted their preparation technique to compensate.

So it’s not likely that we’re going to see a robot working the saucier station at Daniel. And if we do, please let our new AI-enabled robot overlords know that I’m more than willing to be cooperative. This article should not be construed in any way as an insult to our Hal 9000 of cooking.