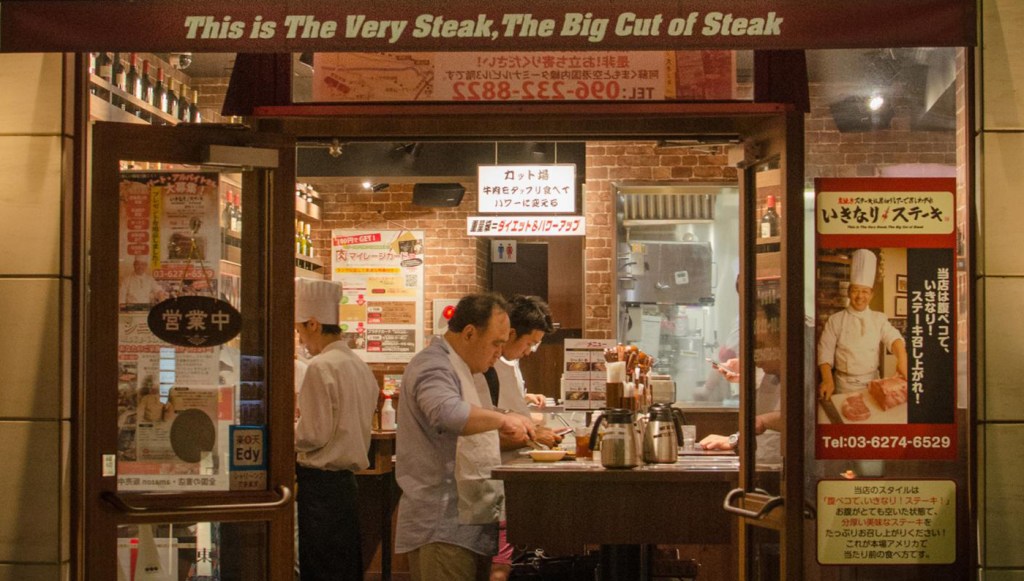 Few things are as rightfully cocky as a steak. The partner in crime to an intense Bordeaux, necessitating a sharp steel blade, and best dressed in a classy combo of simple salt and pepper—a rare steak is basically the Paul Newman of the food world.

But I can never seem to give one over to an actual plate when cooking at home. You should let a steak rest for 10 minutes after grilling, to absorb the juices and heighten the flavor. Ha. There’s no way I have that amount of self-control.

My favorite way to eat a rib eye, flank, or filet mignon is standing by the kitchen sink. I fork it off a grill pan, transfer it (dripping juice all over the counter) to a cutting board, and then chew like a Neanderthal as the steam rises underneath my chin. There’s no white tablecloth or candles. There’s a wooden board, an open wine bottle, and a total lack of pretense.

I’d never discussed my stand-up steak habits with anyone until a few weeks ago, when I landed in Tokyo and a local friend suggested Ikinari steak house. “There are no chairs at Ikinari,” she said. “It’s very Japanese. You stand to eat your steak and then…well…you just leave.”

Suddenly, I realized this culinary fetish was not mine alone. Perhaps it wasn’t “very Japanese,” I pondered, but very human. Was this was a place any good, though? That was the question.

Ikinari, I’m delighted to say, is fantastic, and it’s a must-visit for meat eaters in Tokyo.

The name translates cheekily to “Sudden Steak,” and as one would expect, the various locations around the city see a flood of businessmen, casual dates, and single diners looking for a hearty meal on the fly. The cost runs counter to the rest of Tokyo: A 400-gram rib eye and two glasses of Malbec cost $54. I would’ve happily paid more.

You’re led through the single-room space, filled with diners and a perfume of dreamy meat smoke. At a back butcher counter, a simple menu explains the cut options—rib eye, sirloin, tenderloin, and wagyu—and the pricing.

I went with rib eye and waved the knife away when he offered to trim the marbling. “I’m American,” I explained. He nodded. Any discussion of my country’s love of fat would have been redundant.

The crowd and vibe at Ikinari is boisterous, jovial, and much louder than it would be if there were chairs. Customers aren’t separated by tables; they simply find an empty spot at the high-top counters while their meat grills, watching it through a picture window in the back. Leaning over to chat with your neighbors is expected and encouraged. It’s like a bar—only full of awesome meat.

The steaks are paraded through the room on hot pans, sporting a small dollop of garlic butter, a thin layer of corn, and the unforgettable addition of wasabi. It’s understood where your focus should lie once the meat arrives. Conversation ceases abruptly.

I polished off the rib eye with the help of my boyfriend. Our steak was perfectly pink, medium rare. The slices were tender, with a great balance struck when where char met aromatic, fatty garlic butter in the mouth. We spent 10 minutes chewing in blissful silence. And then, like that, we were done.

“I’m a reincarnated Japanese businessman,” I declared, walking back out into the wet streets of the Ginza neighborhood. “Nothing else can explain how much this place speaks to my soul.”

I’ll never make a steak at home again without the addition of wasabi. And if you go to Tokyo, it’s just as essential to pay a visit to Ikinari, which has multiple locations across the city. They don’t take reservations, and the lines can get long, so plan accordingly.