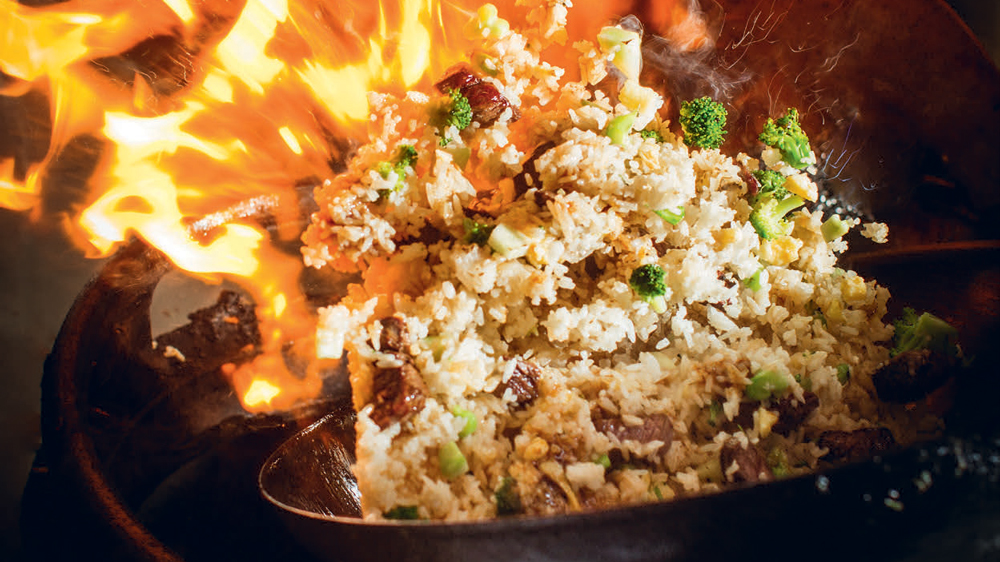 In 2016, chef Brandon Jew opened Mister Jiu’s in San Francisco’s Chinatown, occupying the space that had housed the restaurant Four Seas for nearly 50 years. It’s not like he was looking for a restaurant as ample as the 10,000 square feet he was taking over, but he wanted to preserve this building that he felt was an important piece of Chinatown history and culture. He searched for investors and used his upbringing as a chef, immersion in San Francisco’s Chinatown and travels in China to inform what he wanted with his restaurant.

“Where I arrived with Mister Jiu’s is exactly where I’ve always been: in between. A little of this and a little of that. American and Chinese. Modern and traditional,” Jew writes in his debut cookbook Mister Jiu’s in Chinatown. “It’s a place that celebrates all my influences, standing in the heart of Chinatown, the place where Chinese American food began.”

He’s thought deeply about the canon of Chinese American recipes that grew up in San Francisco and has applied his technique and California’s bounty of produce to create his restaurant that now boasts a Michelin star. And from his new cookbook, he shares his expertise to take a classic fried rice to the next level.

The whole point of fried rice is to showcase the ethereal charred, smoky flavor, aroma, and texture known as wok hei. A wok makes this a lot easier to achieve, but I’ve made it happen with a thin cast-iron pan too. Here are the secrets.

Cooking fried rice is all about immediacy, but you can begin with a mise of all kinds of leftovers. My mom, for instance, always packed doggy bags of the scraps of roast beef and rib-eye from Saturday nights at Sizzler to make the best fried-rice lunch the next day. This version uses tender marbled cuts of wagyu, chopped broccolini, egg, and a dusting of salty sīn beef heart that takes a few days to cure and may require a special order from the butcher.

Bring a small saucepan of heavily salted water (it should remind you of seawater) to a boil over high heat. Add the broccolini and blanch until crisp-tender, about 2 minutes. Drain and set aside.

In a small bowl, beat the egg with a pinch of salt. Warm a wok or a large cast-iron skillet over medium heat. Add the 1 tsp neutral oil, then the egg, and cook, stirring occasionally, until softly scrambled but with no browning, about 30 seconds. Transfer to a bowl and set aside.

Turn on your ventilation hood or throw open your windows now! Warm the pan over high heat until just starting to smoke. Add the remaining 1 tbsp. neutral oil, then add the steak in an even layer, and season with salt. Cook without moving until well-seared on the bottom, about 1½ minutes. Add the rice, broccolini, and scrambled egg and toss to combine and break up any lumps in the rice. Keep everything moving until heated through, 1½ to 2 minutes. Now let the rice sit without stirring until the bottom browns and lightly chars in spots, about 1 minute. Smell that wok hei? If not, stir up the rice again and let it brown once more.

Add the oyster sauce, soy sauce, and sesame oil to the rice and toss continuously until well combined, about 1 minute. Transfer to a serving bowl, top with the green onion, and use a Microplane to shave a generous dusting of cured beef heart, salted egg yolk, or bottarga over everything. Serve it piled in a rounded mound, so it stays hot longer for the table. Eat immediately.

Reprinted with permission from Mister Jiu’s in Chinatown: Recipes and Stories from the Birthplace of Chinese American Food by Brandon Jew and Tienlon Ho, copyright © 2021. Published by Ten Speed Press, an imprint of Penguin Random House.