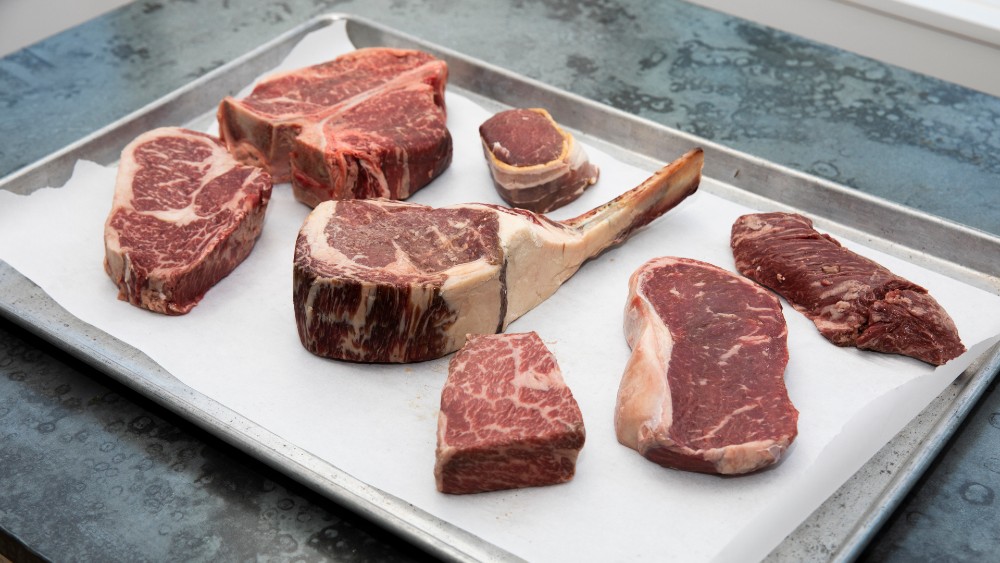 What the pastry case is to the bakery, the dry-aging room is to the steakhouse: It is a literal window into the foresight, patience and dedication of the chef.

And up until now, the meat behind the glass of dry-aging rooms was just something to gawk at before having it cooked to order for your table. But as restaurants try to diversify their revenue streams—from offering Michelin star-quality takeout to selling off rare bottles of wine from their cellars—some of the best steakhouses in America are opening the doors of their climate-controlled meat closets, and selling the raw, dry-aged cuts directly to you to sear off at home.

Houston chef Chris Shepherd launched a “meat market” from his steakhouse, Georgia James, at the end of March. From there he sells a variety of cuts, including whole octopuses and a 30-ounce dry-aged, long-bone ribeye. He’s sold more than 80 of those ribeyes so far; by comparison, they’ve sold nearly 400 16-ounce ribeyes.

“A lot of our regulars are buying, but we’re also seeing new faces for a few reasons,” Shepherd said. “44 Farms beef (our farmer) isn’t available retail, and it’s a much simpler process to purchase beef through us versus a grocery store.”

Buyers don’t need to fight anyone for their purchases or queue up in long lines when they get it directly from a restaurant. They can browse the menu, place their order and checkout online. Then they pick it up at a designated time.

That’s also how it works a little farther north, at chef John Tesar’s Knife in Dallas. A variety of bone-in ribeyes (also from 44 Farms) that have been aged anywhere from 45 to 240 days are available over the counter. Curtis Stone’s Gwen, in Los Angeles, is selling more than a dozen cuts from its in-house butcher shop, which includes 30-day aged ribeyes and 45-day and 50-day aged porterhouses and New York strips.

Owner Simon Kim says they’ve been selling about 30 of those packages a week, some even being bought as gifts.

“We are seeing most of our customers purchasing the Steak Care Package because they love to cook at home, but don’t have the access to high-quality dry-aged meat right now,” Kim said. “Many of our guests are isolating in the Hamptons and picking the packages up on their way out of the city. A personal friend of mine picked up four packs on his way up to his compound—that’s 16 pounds of ribeye!”

From the outside it could seem like emptying your restaurant’s dry-aging room is short-sighted; the product only gets more valuable with time and you won’t have anything to sell when you reopen. But Shepherd says that’s not the case. This is no fire sale. In fact, offloading it now keeps his food supply chain alive and healthy.

“We have a constant supply of meat coming in,” he said. “At Georgia James, we can’t keep up with the amount of dry aging. Our meat distributor dry-ages most of our steaks for us, and we finish it at our restaurant. We’re doing this to keep the supply chain open. If we stop, our dry aged beef will be way too dry, and we need to ensure that our farmers and ranchers continue their processes.”

And to Kim, there’s no point to keeping the meat in there, dry-aging for an indefinite period of time.

“While more aging can result in more flavor and uniqueness, after too long it becomes more of a novelty item,” he said. “I believe aged beef is at its most delicious between 45 and 65 days, personally. When you have 100-day dry-aged beef, it’s a unique and beautiful gastronomical experience, but I would not recommend eating 16 ounces of it. However, give me 16 ounces of 45-day dry-aged ribeye, I would eat that any day.”

A care package from Cote.  Courtesy of Cote Korean Steakhouse

Cooking dry-aged meats at home is a little different than preparing fresh meat. Shepherd says the process will be the same, but it’s important to understand the moisture content is different and the texture will be as well. He recommends cooking it in a big cast iron pan or, like a true Texan, taking it outside to the grill.

Cote sends an entire printed-out instructional guide, written by chef David Shim, to those who purchase a care package. Kim says because the flavors of dry-aged meat are nuanced, you don’t want to use elaborate seasonings or sauces. But fermented ssamjang, he says, matches with the meat—they’re both salty, funky and have intense umami flavors.

“Our dry-aging room is similar to a great cheese cave, it’s truly an art form,” Kim said. “We carefully control the temperature and moisture to create great flavor. This care and control results in a distinct flavor and tenderness of the beef. Being able to give our guests access to this awesome beef during this time of crisis is an awesome opportunity for them to experience its distinct flavor at home and it helps the restaurant sustain itself at the same time.”