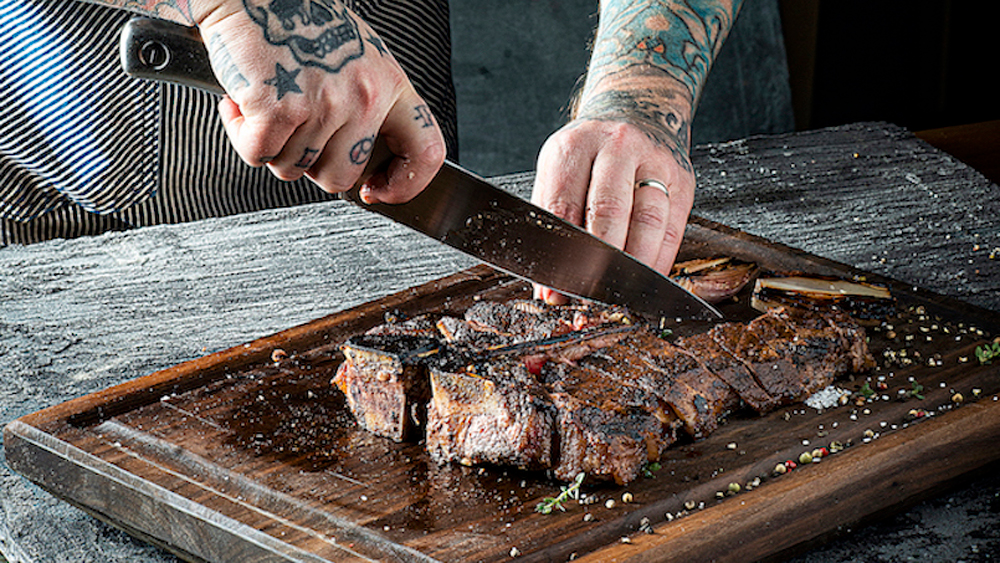 “What we’re seeing in all markets right now is people’s desire to connect and enjoy time together in celebratory fashions and experiential fashions,” says hospitality mogul David Morton, who runs restaurants in Chicago, New York, Washington, DC and Las Vegas. “It’s unlike anything I’ve ever seen before in my career. And needless to say, Las Vegas is the epicenter of it. People are so in the mood for that level of experience.”

At Morton’s One Steakhouse in the Virgin Hotels Las Vegas resort that debuted last March, chef Patrick Munster offers 2-lb. porterhouses that are sliced tableside and surf-and-turf presentations with tabletop grills for steak and shellfish.

“It’s kind of like that sizzling fajita effect,” Munster says. “You see one of those surf-and-turfs going through the dining room, there’s smoke coming out of it, there’s a grill with hot coals. So once somebody sees that, it kind of starts that snowball effect and everybody starts ordering it.”

So, not surprisingly, One Steakhouse also has baked Alaska with the requisite flames. But the main event is a $1,200 dry-aged tomahawk feast that can comfortably feed 12 to 14 people. The tomahawk can range from 16 to 20 lbs. and comes with six sides that might include potatoes, roasted maitakes with goat cheese and a pasta dish like baked rigatoni with short rib and whipped burrata.

“Being in Vegas, there’s a steakhouse a stone’s throw away, and you’ve got to do a few cool tweaky-type things to stand out,” says Munster, who says he sells at least one tomahawk feast every week and has had weeks where he’s sold four.

One Steakhouse in Vegas has an over-the-top tomahawk steak.  Photo: courtesy Jim Decker

One Steakhouse is one of many prominent new restaurants around the country that’s bringing together old-school glamour, tableside steak spectacles and 21st century cooking.

“We kind of went for it all,” chef John Villa says of Cucina 8 1/2, the “refined rustic Italian” restaurant that he opened in December at Midtown Manhattan’s Solow Building. “There’s tableside service. There’s tablecloths. We went for what Midtown used to be. I love going back and doing things that were done a long time ago.”

Cucina 8 1/2 mixes Caesar salad tableside. (“To me, it’s the only way to have a Caesar,” Villa says.) Servers bring over Dutch ovens with chicken Parm and snip basil atop it tableside. The restaurant’s dry-aged bistecca alla Maremmana is a certified Angus prime porterhouse that’s brushed with rosemary and olive oil.

“It comes out with a whole bunch of rosemary,” Villa says of the steak, which is carved tableside, of course. “Sometimes, I’ll light the rosemary on fire a little bit. It’s on a board. The guys have the nice carving knives. They’ll present it and engage with the table and see how the guests want it sliced, thick or thin. It adds a little something else to your dinner.”

Villa, who marvels at how many souffles he’s been serving during lunch, has created a restaurant that’s quickly become known for its riffs on classic upscale dining. For Valentine’s Day, he served a poussin with truffles that was carved tableside. He took the Caesar off the menu that evening because he knew the restaurant was going to be busy and didn’t have enough carts. But guests kept asking for it anyway, and Villa accommodated their requests for tableside salads.

“Especially nowadays, you don’t want to tell people no,” he says. “You can get a Caesar salad everywhere. I wasn’t going to serve a regular old Caesar. I love the tableside. And I use gem lettuce, all the best Parm you can get, pastured egg yolk.”

After seeing how guests have reacted to tableside presentations, Villa is now waiting to get the right copper pot so he can serve tableside zabaglione with seasonal fruits. It would be nice, he thinks, to let customers choose whether they want their dessert to include Marsala wine, Lambrusco or Champagne.

At Fanny’s, a glitzy new Los Angeles restaurant inside the new Academy Museum of Motion Pictures, chef Raphael Francois has a section of his dinner menu known as “live performance.” This is where you’ll find tableside presentations of côte de bouef, tomahawks and a cheese cart. Fanny’s plans to add tableside Dover sole soon. For dessert, there’s a chocolate tart that also arrives at your table on a cart.

“The restaurant has this unique tie to the film world, and we were trying to figure out how do you represent that in a relatively authentic way that also pays homage to where restaurants came from,” restaurateur Bill Chait says of Fanny’s, which started dinner service in December.

With inspirations that include the see-and-be-seen vibe of legendary Los Angeles restaurants like Chasen’s and the Brown Derby, Fanny’s is a throwback to the days when captains wore suits and servers poured sauces tableside. But it’s also a response to the pent-up demand for over-the-top experiences in 2022, after a couple years when restaurant lovers mostly ate at home during a global pandemic.

“People are definitely going out for the sake of socialization,” Chait says. “There’s no question that there’s an element of dress up and have a night out and leave your troubles behind.”

And having an interactive experience, like when a waiter pushes over a dessert cart and explains how the chocolate tart at Fanny’s is based on a recipe Francois got from his grandmother, makes dining out feel more special.

“It just adds a level of elegance instead of, you know, just dropping a plate with a tart on it in front of somebody,” Chait says.

At Akira Back’s ABSteak in Los Angeles, servers cook premium Korean barbecue (including wagyu that’s aged with ssamjang) on tabletop grills. Also at the table, they mix tartare that comes with nine compartments of ingredients, including wasabi, onions and bell peppers. Guests are encouraged to tell the staff whether they want more or less of any element.

Back, an ambitious empire-builder who also just opened a high-profile Paris restaurant, is using ABSteak to merge the ideas of a steakhouse and a Korean barbecue restaurant in a decidedly over-the-top fashion. So you can start meals with a little spoon topped with A5 wagyu, caviar, uni and truffles.

In Miami, Major Food Group is looking to amp up the steakhouse experience with its Dirty French steakhouse that’s opening later this year. Chef Mario Carbone says he’s taking the Dirty French experience that Major Food Group created in New York and “turning it up on every level.” This means tableside steak presentations, flambéed desserts, a celebratory party vibe and tuxedoed captains who ask whether you want to preorder soufflé when you sit down.

At ABSteak, the beef is grilled right at the table.  Photo: courtesy ABSteak

At this Dirty French, guests could get a tableside experience for every course of their meal. If the demand is there, why hold anything back?

In Los Angeles, Chait recently spoke to his Newport Meats supplier, who told him that big cuts of beef and “anything that’s sort of gluttonous” has been selling quickly. This makes sense at a moment where people are gathering in big groups at restaurants again.

In Las Vegas, Munster picks out “the biggest, most obnoxious-looking tomahawks” for One Steakhouse and then starts a three-day process that involves marinating the meat overnight, slowly warming it in an oven and then blasting it at about 650 degrees to create a beautiful crust. He’ll grab guests who’ve ordered a tomahawk feast and bring them into the kitchen and explain how he prepared it.

“It’s interactive and it’s family-style, which people are craving after what happened with the pandemic and lockdowns,” Munster says. “It’s a blast to do. It’s fun for everybody involved. We had a table for Valentine’s Day that ordered it. They were so ecstatic to do it. They said they had waited two years to do something like this.”