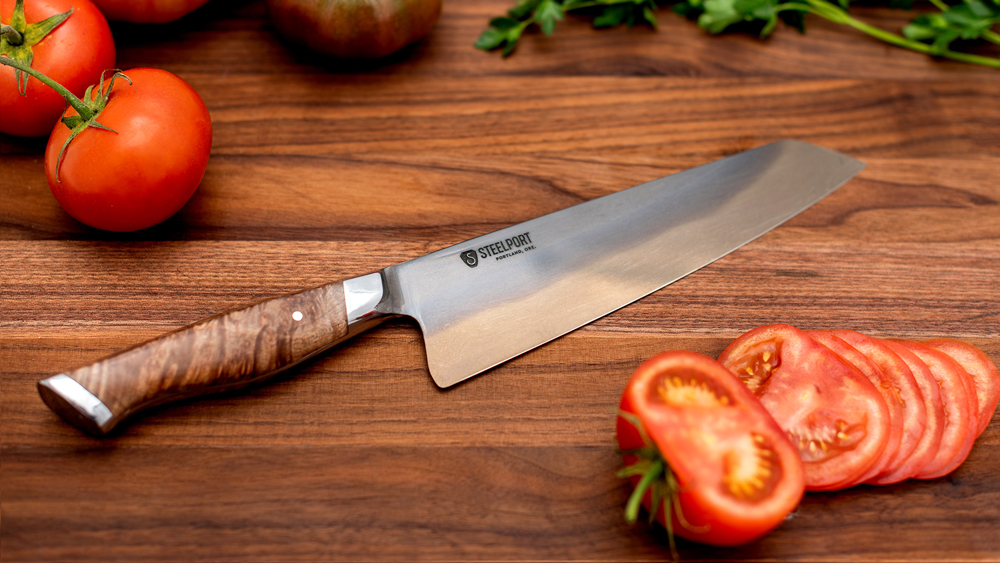 As I plucked the knife from its box, the weight surprised me a bit. In recent years, I’ve become accustomed to my kitchen blades being feather light. My Japanese knives are thin and nimble and are now my go-to, making my beloved old German blades feel almost clumsy by comparison. So when the Steelport 8-inch chef knife was heavier than I expected, I was wary about how it would perform. It put those concerns to rest immediately.

Steelport Knife Co. was founded by Portland, Ore.-based Eytan Zias, a chef turned knife sharpener and purveyor who started forging his own blades last decade. In 2020, he decided to create his own line of knives, and this past March the company released its first batch of blades, with the 8 inch as the star of the show. It’s a handcrafted knife featuring a full tang, carbon steel and a handle made from handsome Oregon big leaf maple that’s reinforced with resin for better durability.

There are little grace notes about the knife that show it’s made by someone who cooks, like the ergonomics of the handle that make it quite comfortable to work with and the little notch where the blade meets the handle that lets your finger position itself more easily when gripping the knife. It’s not the most elegant or poetic of descriptors, but the Steelport just feels solid when it’s in your hand.

Because the blade is so balanced, I found I didn’t mind that it weighed a little more than my favorite Japanese knives, and, in fact, that weight became an asset, as that little bit more heft made working through onions and root vegetables that much easier.

So many knives I try are sharp right out of the box, but it’s after a few weeks of use where I like to see how they’re performing. Even before I had to pull out my sharpening stone, the blade was still cutting and slicing with precision.

I was impressed and drunk on power, like a late-night infomercial chef showing off his Miracle Blade by cutting through a leather work boot just because they can. I wanted to see what this thing could really do. Okay, maybe I showed a little more restraint than chopping up my footwear. However, I set my big bread knife aside for a minute, curious to see how the Steelport would handle a big loaf of day-old Tartine country sourdough. Most of my knives can’t get through the thick crust as well as my serrated blade, but I’ll be damned if Steelport didn’t slice bread better than the knife I bought specifically for the task. Time and again, it proved to be the versatile chef knife I’ve been looking for. And for $400, it performs as well as a knife twice its price.