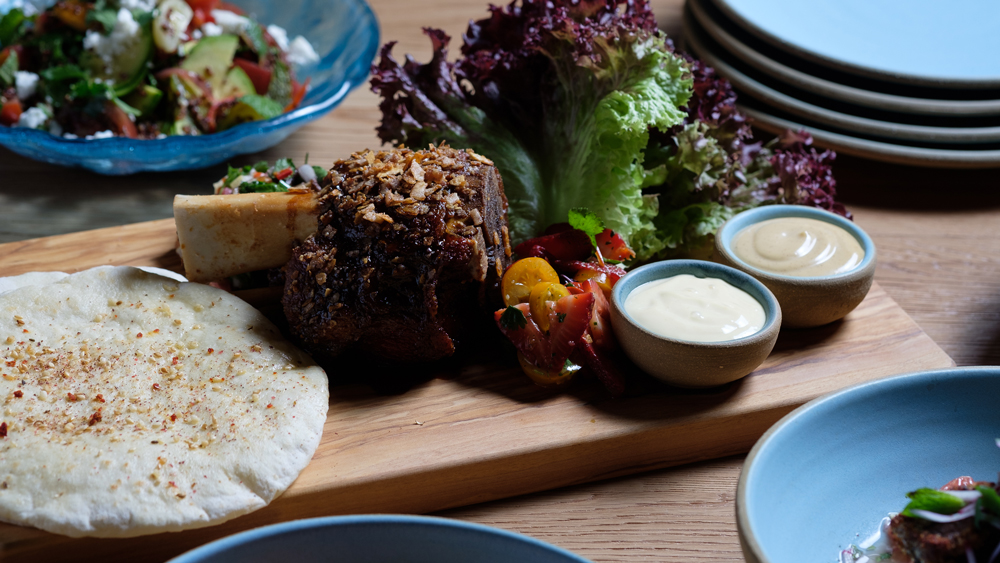 When Stephanie Izard told a chef she knew that she planned to open an offshoot of her flagship Chicago restaurant Girl & the Goat in Los Angeles, they had a warning: “You’re going to have to just put chicken on salad out there.” Would her Midwest, meaty, shareable dishes fly on the coast? Would gluten now be the enemy to her big bread program? Would she have to make healthier versions of her food?

Just a few days into Girl & the Goat LA’s soft opening—where she’s already serving a robust crowd of 350 people a night—her colleague’s prediction doesn’t hold. “Our goat liver mousse, we sell four times as many here a night as we do in Chicago,” Izard tells Robb Report. “People have misconceptions about what people in LA want to eat. People are down to try a whole bunch of things.”

Izard, the first woman to win Top Chef, has packed people into her flagship Girl & the Goat for more than a decade and opened multiple concepts in the Windy City. But this project may be her biggest challenge. The LA Girl & the Goat will be her and her business partners’—Boka Restaurant Group—first time opening a property outside of Chicago. After being beset by delays, primarily from the pandemic, the restaurant has finally come to fruition–and now they have to see if they can translate their success from Chicago to LA.

Of course, the streets of LA are littered with out-of-town restaurateurs who had found success back home then fizzled out when they got to the City of Angels. Tartine’s massive Downtown LA project flopped (though their neighborhood cafes remain), Phoenix’s pizza master Chris Bianco struggled, Daniel Humm and Will Guidara couldn’t bring the LA NoMad to the heights it had achieved in New York, and Mexico City’s Maycoll Calderon’s Tintorera lasted less than a year.

Izard is attempting to buck the trend by actually putting roots down not just in LA, but in the roughhewn Arts District where the restaurant is located. She has an apartment around the corner from Girl & the Goat, posting up in town for the last few months to get the place off the ground. She’ll continue to shuttle between the two cities, keeping an eye on both closely.

And while she wanted her first restaurant outside of Chicago to be a Girl & the Goat, she isn’t forcing a carbon copy on LA. The core of the restaurant, bold flavors from around the globe, will remain, but while a few signature dishes made their way out west, they’re being shot through with a prism of LA. That goat liver uses LA ingredients for its accents to make it a So-Cal specific dish—it’s now accompanied by citrus mostarda instead of the ramp giardiniera served in Chicago. And she’s creating all new offerings inspired by the produce she finds here, like a tomato salad with stone fruit from a local farm, tossed in chili oil and crispy quinoa and served atop a tahini dip.

Izard is opening this brand-new spot at a time when she’s ramping up the rest of her restaurants in Chicago, as they recover from the Covid-19 closures. On top of causing delays to opening her LA location, the pandemic also put a dent in what had been a budding collection of restaurants in Chicago’s West Loop, one of the country’s great dining neighborhoods. Izard furloughed a large number of her staff, but like other Boka Group restaurants, extended insurance to laid off workers through the year. Because of Boka Group’s size and because it eliminated more than 250 positions, by Illinois state law it had to disclose the layoffs a month ahead of time. So last July, they filed paperwork detailing intended cuts. Little Goat Diner laid off 96 employees, Girl and the Goat 55 and 42 at Duck Duck Goat.

As they reopen, they’ve received a boost. Girl & the Goat (operating under Lam and the Goat LLC) was one of 100,600 businesses that was awarded a Restaurant Revitalization Fund grant, receiving $1.8 million from the Small Business Administration, while the SBA gave Little Goat $1.5 million.

Izard is offering jobs again to people as the businesses regain their footing, but not everyone has returned, as she says that some employees took other opportunities, while others left the restaurant industry altogether. But operating through the leanest times of the pandemic prepared the restaurant group to have fewer staff than before. So at Little Goat Diner they’ve pared down the menu from 95 items to 35, and at Girl & the Goat they’ve slowed down their pace, letting diners hang out longer; they also cut back closing time to 11 pm instead of midnight to ease some pressure on the staff they do have, and they’re only open six days a week for the time being.

To try to get more people in the door, Izard’s proactively thinking about the culture she’s creating, as well. “When something does go wrong, we get upset, but not in a way that makes you scared to exist–it’s more like, let’s figure this out,” Izard says. “I’m not going to scream and throw food back. I hope with everything the restaurant world has gone through, I hope people are a little more aware of how they treat their kitchens.”

She took in feedback during the pandemic that management could be better at communicating among the restaurants, so they’ve started a newsletter so they could give staff a better idea of what’s going on. And they’re also trying to be more direct with staff about promotions and helping people develop their career within the company. The company also revived a position they had before the pandemic, in which one employee is responsible for philanthropy and staff appreciation. They plan events like bowling nights and a beach party for employees across the Chicago restaurants.

The slightly smaller teams are making it work though, with diners each night approaching pre-pandemic levels. And while Izard says it still feels different from before, she can’t help but notice the enthusiasm in LA and back home.

“We had Girl & the Goat’s 11th birthday party recently and I wasn’t there because I’m in LA, but the team sent me a video and people were dressed in their flapper outfits for a dance party on a Sunday night,” Izard says. “People are just really excited to go out again.”