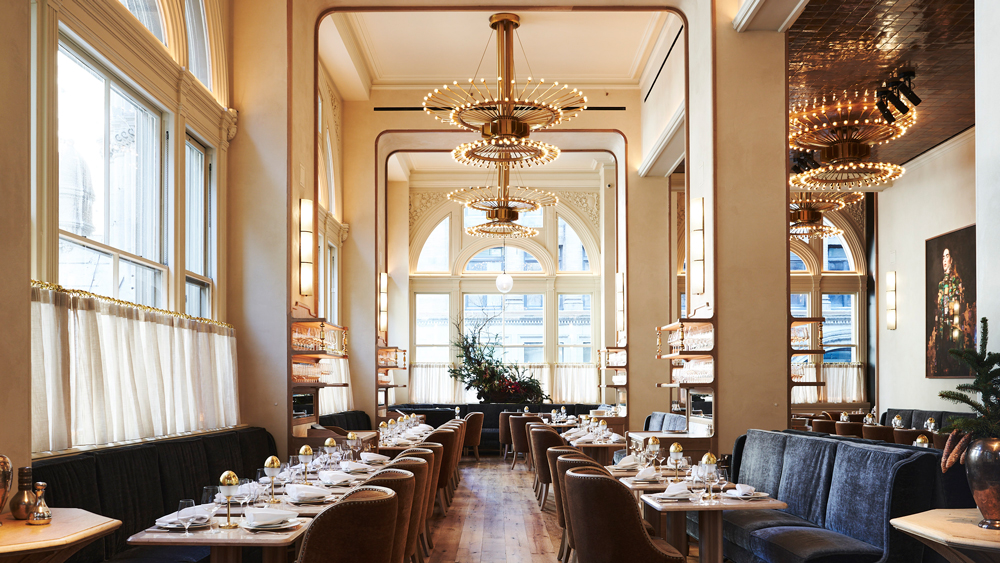 “I didn’t want to open in a museum,” Starr said. “That was never my plan. It’s the space that I fell in love with first.”

The 45,000-square-foot Renaissance Revival building, constructed in the 1890s, has dramatic 20-foot ceilings, stained glass, archways and cornices. Verōnika doesn’t shy away from the opulence in its own design, with luxe brass chandeliers, a marble bar and a bohemian mural of a forest.

“The design is pretty awe-inspiring, very sexy,” he said. “I’m inspired by the whole space and the fact that it is a museum celebrating photography. I thought it was young, wasn’t stodgy and old and I thought it was the perfect sort of a synergy with us. You want to just sit there and be seen and hang out and have cocktails.”

The menu, from executive chef Robert Aikens (The Rainbow Room, The Dandelion, Le Gavroche), is inspired by the cuisines of Northern France, Austria and Eastern Europe at the turn of the 20th century. These are the dishes you’d find in a Parisian brasserie or a grand café in Vienna—comforting and rustic, classic and elegant.

“It’s sort of this almost mythical place that we created—mysterious and bohemian,” Starr said. I’m like producing a movie and I’m making references to things that I’ve seen and there are things that I’m making up. It’s what I think it could be or should be.”

A dessert trolley brings around dishes like Viennese chocolate cake with apricot preserves, and Medovik, a Russian layer cake with burnt honey cream and bee pollen. Wines and beers are also from the French and Eastern European regions and cocktails include funky local botanicals like fennel seeds and pickled grape brine.

“The food is authentic and we’ve elevated the ingredients and so forth, but the decor and the lighting is stuff that doesn’t necessarily exist, but you probably think it does somewhere. If you go to Balthazar or Pastis, which are French bistros, there’s probably nothing in Paris that looks exactly like that. They are a combination of many different things and ideas. It’s something I always wanted to do.”

Starr is also running a café on the first floor of the building and a cocktail bar in a restored cathedral adjacent to the museum building. Chapel Bar is modeled after the warm salons once found in London, Paris and Vienna.

“I think it’s something that people haven’t seen before,” he said. “New York is the greatest city in the world, but it’s New York. We’re all used to it and we’ve seen it and done it all. This is taking you to a different place and I think everybody likes to escape here and there.”