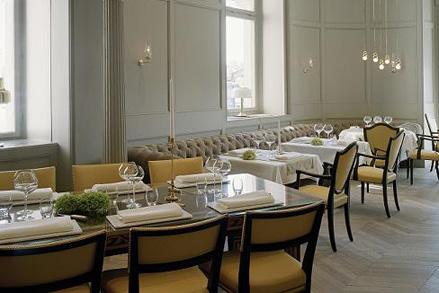 Swedish chef Mathias Dahlgren’s restaurant Matsalen—located within the Grand Hôtel Stockholm—recently received its first Michelin star, less than a year after opening in May 2007.  The award came shortly after Robb Report editors selected Matsalen as one of only nine restaurants to receive Best of the Best honors in the June 2008 issue. Matsalen—an à la carte dining room with a chef’s menu—is one half of a dual restaurant concept that also includes a food bar, Matbaren. Dahlgren credits his use of high-level Swedish favorites, such as brown butter, potatoes, and berries in simple presentations for his rising success in the culinary world. Dishes in his à la carte dining room include a raw and smoked reindeer appetizer with Kalix whitefish roe and marrow toast, and a main course called “The Taste of a Swedish Cow,” which features grilled tenderloin with a sauce made from the trimmings, mashed potatoes seasoned with bone marrow, and wild vegetables. (+46.8.679.3584, www.grandhotel.se)