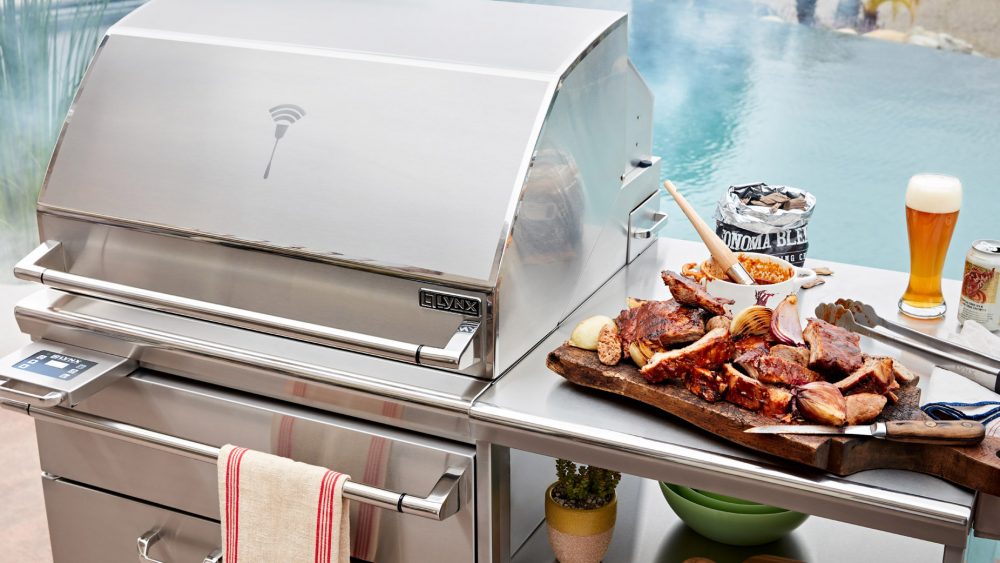 One of the greatest joys of summer is heading outside to cook with fire. Especially exciting is the new wave of outdoor cooking systems on offer that go well beyond the old black kettles of your youth to offer grills, ovens and smokers that will add a new depth of flavor to your prized proteins. We’ve gathered some of the best equipment to for your backyard bacchanal along with the guides and meat purveyors who will make your neighbors jealous of your set-up.

Heston Blumenthal brought scientific rigor to the meat-centric meals at his Michelin three-star Fat Duck—and now he’s doing the same for your summer cookouts with his Hub II ($2,499). The grill delivers real charcoal cooking with the ease of a push-button ignition and, for a more crowd-pleasing method, retractable rotisserie poles that allow for whole-animal cooking on a spit.

Only the most hard-core pitmasters are willing to put in the time for real barbecuing—that is, low-heat cooking that can last hours on end. The Lynx Sonoma Smart Smoker (starting at $2,969) will free you up from a long afternoon of hovering over your meat thanks to a Wi-Fi-enabled app that lets you set the controls and go. Sensors inside ensure consistent temperature, and a digital probe thermometer lets you check doneness from afar.

Why You Need a Wood-Fired Oven

Nearly everyone has a grill. Some aficionados even have a smoker. But those who really want to take their backyard barbecues to the next level need a pizza oven, too. The ilFornino Fiamma Rossa wood-fired oven (starting at $2,195) lets you bake classic Neapolitan pies in a 900-degree oven, as well as roast vegetables and impart smoke in a whole fish without it sticking to the grates.

A Comprehensive Guide to Steak

One of America’s greatest barbecue pitmasters, Aaron Franklin has turned his studious command of fire toward steak. In his newest book, Franklin Steak, he gives an in-depth primer not on barbecue, but on cuts, butchery, dry aging, types of grills and, yes, cooking big slabs of beef. Less a cookbook than a guidebook, there are a handful of the recipes to accompany the steaks you grill this summer.

The Key to Better Burgers

If you plan to indulge with your burgers, go with a higher-fat ground beef (up to 30 percent fat, as opposed to the 7 to 20 percent you get at the supermarket), which will make the burgers juicy and rich. However, if you want to up the ante even more, get ground beef that’s been dry aged. The flavor will be significantly beefier and complex than anything you’ll get at the store. At Flannery Beef, they incorporate dry aged beef into their Adventurous Blend.

How to Barbecue Everything

A few years back, when Michelin two-star chef Josiah Citrin opened a restaurant in Venice, Calif. he didn’t want to be just like his flagship fine dining restaurant Mélisse. At his restaurant Charcoal, he wanted to channel the wood-fired backyard cookouts he’s loves to do at home for friends. In his new book Charcoal he shows you how to master your grill in order to show you how to turn smoke into an ingredient. So you’ll get the instruction on better backyard meat, but also dishes like grilled figs with ricotta, or using charred peaches to take a bellini to the next level.

You could get a big beef rib roast or barbecue a giant pork shoulder, but there’s an unexpected cut to turn to when you want to feed a crowd. One of the hottest dishes at the hottest restaurants in LA, David Chang’s Majordomo, is their APL short rib. It’s not just one rib, its multiple bones making up what’s called plate short rib. This 7-lb. behemoth from Snake River Farms cooks low and slow in the barbecue for hours, producing an insanely tender and indulgent cut of beef.

Let Michelin-Starred Chefs Show You How to Grill Steak

David Kinch of Michelin three-star Manresa and Carlo Mirarchi of two-star Blanca teamed up to discuss how their differing methods for grilling steaks.