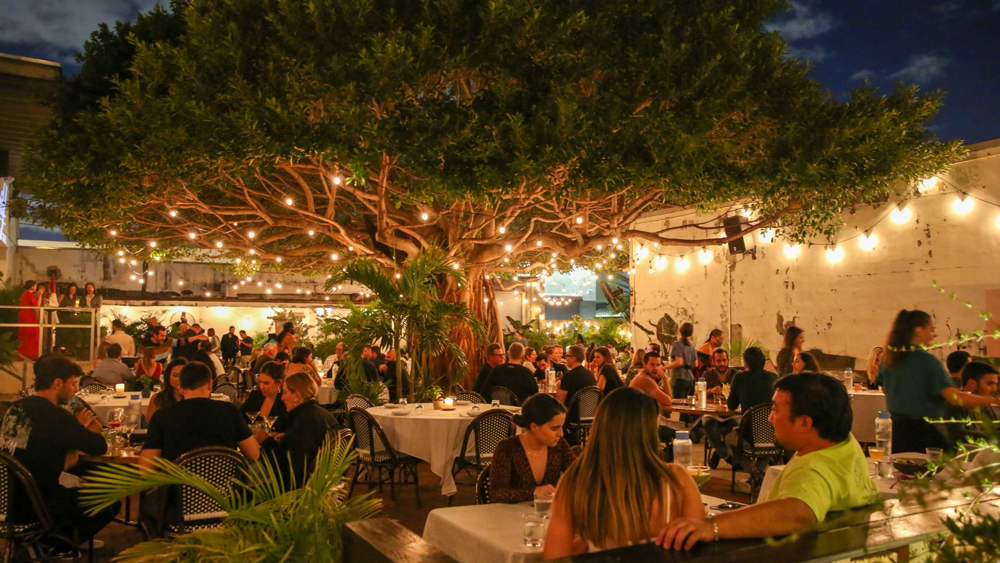 Eating in a Miami steakhouse can mean a few things. There’s the Brazilian model with roving servers and limitless tableside churrascaria; reliable, all-American brands like Ruth’s Chris and Smith and Wollensky; and the South Beach meat temple with club lights and man-glam vibes.

And when I’m visiting lush, tropical Miami, I really don’t want to dine in any of them, which is why, after a recent three-day eating spree, I almost canceled my reservation at Sunny’s Steakhouse. Beyond the original sin of serving wagyu strips and dry-aged ribeyes in a climate better suited to, say, ceviche, Sunny’s has the audacity of being an outdoor steakhouse with no AC and completely open to the elements.

But in their full-on embrace of South Florida weather, owners Will Thompson and Carey Hynes have created the most Miami steakhouse imaginable, one where casually dressed diners sit at white linen-topped tables encircling a fairy-tale-of-a-banyan tree. It’s a scene, but not the scene.

“Because Miami is so hot, it forces you to rethink the steakhouse context,” says Thompson, who manages the bar program and front of house.

The Martini, poured tableside to keep the South Florida heat away as long as possible.  Michael Pisarri

Then, upon arriving at your table, they toss the water into the bushes. It’s a silly yet grounding gesture that reminds you: yes, you’re outdoors, and you might even get wet.

Sunny’s is a Covid-19 baby. In 2018, Thompson and Hynes, both Northeastern transplants, opened Jaguar Sun in downtown Miami. With just 36 seats, the pandemic meant they could shut down their popular cocktail bar or open outdoors. They chose the latter, but rather than expand onto a hot, cramped sidewalk, they settled into an abandoned roofing factory/events space in Little River, an old Miami neighborhood with a recent burst of development.

With bare bones equipment, Hynes and his team started serving tacos, but after a month, Thompson said it was clear something was missing. “People were going out for the first time in months and they wanted to celebrate and unwind. We had gotten part of the idea right, but not the whole story. We needed something other than tacos.”

A steakhouse seemed right and obvious and festive, and Hynes’s kitchen staff, experienced and diverse, began to sketch out what they wanted to eat at an outdoor steakhouse in Miami. “These aren’t people who have only eaten at Keens,” says Hynes, an alum of Spring and L’Astrance in Paris, plus Per Se, Momofuku and Charter Oak in the States. “And unlike Keens, we have the freedom to indulge in whatever we want.”

As soon as my table polished off an order of those oysters we felt the early drip-drop warning of an uncharacteristic January downpour. Our French bulldog (in his first steakhouse visit) ducked into his carrier, and a few exposed guests scurried under cover.

The rain was short lived but long enough to witness another of Sunny’s service rituals. Eight servers swiftly retrieved white tents and covered tables, one by one. They dried off seats. Dinner resumed with a Caesar salad stacked in an artful tower, showered in fresh parmesan and bolder than most. “We use a lot of anchovies,” says Thompson.

Hynes’ Parker House rolls were a staple at Jaguar Sun, and the sweet, soft, burnished bread with honey butter followed him to Sunny’s. They’re a must-order on a menu largely devoid of carbs. The deftness of Hynes cooking ensures you won’t fill up before the main event, so it’s wise to ignore the guy at the next table who’s drinking Diet Coke and “doesn’t believe in appetizers.”

Even so, it’s a steakhouse. Entrées are the raison d’être, and Sunny’s serves one to fit every speed, mood, diet and weather pattern. Vegetarians can get a cauliflower steak. There’s grilled dry-aged wagyu ribeye for power diners. A hanger steak, half chicken and duck breast are the stuff of regulars. On a swampy day, I might swap my order from beef to turbot.

But it’s Sunny’s sauces that are the ultimate flex and fun. On the word of another local chef, I ordered all the sauces, a full seven of them, each a rollicking South beach pool party into which I dunked my mid-rare steak and earthy-sweet king trumpet mushrooms.

Betraying Hynes’ Parisian training, there’s classic béarnaise and truffle-laced périgourdine that made every bite taste like a million bucks. Spanish-learning salsa verde and smoky, sherry vinegar-spiked piquillo sauce plant you in Miami. Funky XO is for adventures. The pineapple-habanero hot sauce shows up again here, bursting through fat and richness. And lush potato butter fills the menu’s mashed potato void, a nod to comfort without the thud.

Instead of one big entrée, it felt like I got seven, broken up into small bites that carried me—against the odds—through a meal at an outdoor steakhouse in Miami. But it was January and 70 degrees. Last summer, however, proved even too much for Sunny’s tent-popping, ice water-slinging team of professionals. “It was rainy and hot. We had no infrastructure and were tired of being rained on,” says Thompson.

Sunny’s shut down in August, and the staff refocused its efforts on indoor service at Jaguar Sun, but guests wouldn’t stop calling to ask when Sunny’s was coming back.

Thompson and Hynes resurrected the steakhouse last December just in time for Art Basel and they’re working to make Sunny’s a year-round affair. They have a lease and architectural drawings, and they hope to start construction this spring. “If we want to serve local Miami diners and be a healthy restaurant 12 months a year, Sunny’s has to be under AC and a roof,” says Thompson.

But there’s no abandoning their abandoned roofing factory. “Sunny’s will be in this space. The emotional reaction people have to the banyan tree couldn’t be more important to the health and success of the restaurant. We managed to grow the space, and it’s amazing how much it feels like a restaurant. We’re not breaking the thing that makes the restaurant feel good.”