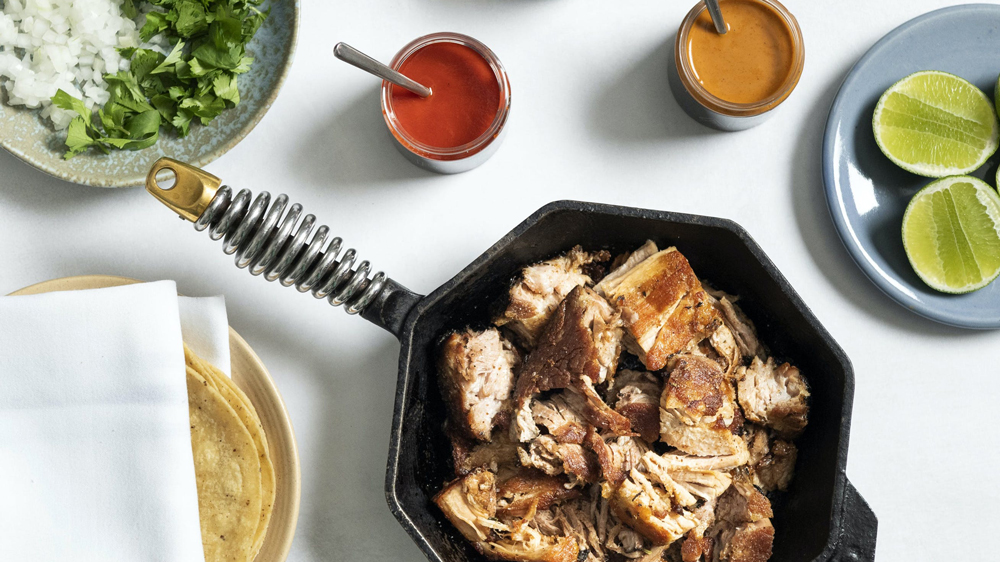 America’s secular holiday, the Super Bowl, deserves an epic feast. So we’ve looked to the best chefs, restaurants and purveyors from around the country that are offering their services for nationwide delivery to cater the feast—instead of preparing everything on our own. From messy Buffalo wings actually from Buffalo to elegant pâté, here are eight ways to create an excessive spread to watch the Rams and Bengals battle in our country’s greatest spectacle of excess.

Get your barbecue fix from Texas via Los Angeles with Bludso’s. Pitmaster Kevin Bludso, whose family has been barbecuing in Corsicana, Texas, for five generations, dry-rubs and slow-smokes meat for up to 14 hours. For a taste of his North Texas-meets-West Coast style, order his Holy Trinity BBQ Combo, which features enough beef brisket, pork ribs, Texas hot links and mild and hot BBQ sauces to feed 15 cowpokes (or actors who play them on TV).

The Bills may have lost out to the Chiefs, but every Super Bowl still requires Buffalo. And now you can get chicken sent to you from the restaurant that helped make Buffalo wings famous: Duff’s in Amherst, New York, just outside of Buffalo. Duff’s has been using the same family recipe for their “famous” hot wings since 1969—even President Barack Obama is a fan. Get Duff’s Spicy BBQ Wings 50-Pack, which is packed with dozens of saucy drums and flats, crunchy celery sticks and baby carrots, and bleu cheese dipping sauce. You may never be able to stomach your neighborhood bar’s chicken wings again.

For those who don’t mind firing up the grill in the winter, only the best meat will do. DeBragga, which has been supplying premium steak to New York and beyond for nearly a century, offers some of our favorite dry aged ground beef burgers you’ll find. These thick Angus patties are made from steak that’s aged 28 days, giving a depth of flavor to your burger that’ll put your local butcher to shame.

Listen, you eating this pizza during the big game is the closest Detroit is ever getting to the Super Bowl (sorry, Lions fans). The angular Detroit-style pie first made famous by Buddy’s Pizza in the Motor City, has spread throughout the country. The late founder of Detroit Style Pizza Co. was crowned “World’s Best Pizza Maker” at the 2012 International Pizza Expo for his take on the Michigan classic. Order a three-pack and choose between six different pies, including Veggie, Meat Supreme and Motor City Sausage.

Years ago, after working in the kitchens of Alinea and WD~50, chef Alex Stupak turned away from the molecular gastronomy movement he’d been steeped in early in is career. The former pastry chef turned to tacos, creating Empellón in New York City. There’s the more fine dining-esque flagship of Empellón in Midtown, but he also has his more casual taquerias, turning out creative riffs on the taco like a short rib pastrami version. Now he’s shipping kits and his sauces nationwide.