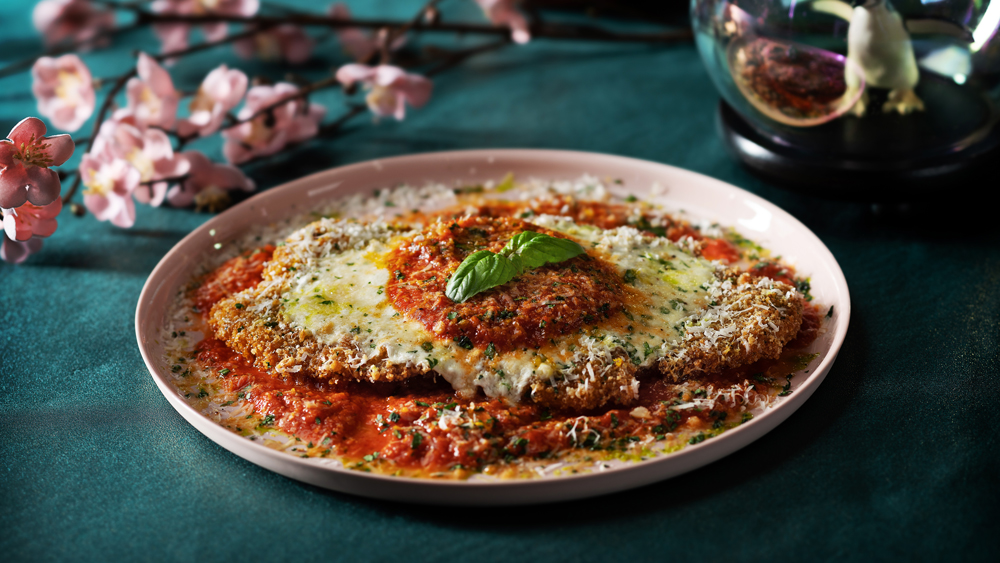 Spiegelworld, the mischievous live-entertainment company behind wild and wacky Vegas shows like Absinthe and Opium, wants to introduce diners on the Strip to “Italian-American Psychedelic” cuisine. Meet the new restaurant Superfrico, which will debut on September 24 next to the Opium theater at The Cosmopolitan of Las Vegas resort.

What, exactly, does Italian-American Psychedelic even mean? That old restaurant descriptor “fusion” is at least somewhat apt here, as one distinguishing trait of Superfrico’s food is using Asian ingredients to amp up the umami of dishes. So the restaurant will serve 48-ounce Creekstone Farms tomahawks that are wet-aged in shio koji. There will be yuzu kosho squid with tangerine honey and charred scallions. And a chicken Parmesan that’s marinated in a yuzu-based ponzu sauce and coated with panko and housemade sourdough breadcrumbs will makes an appearance too.

Meanwhile, different global influences will show up in specialties like a square mortadella pizza that’s “a blend of Northern and Southern Italian flavors” and features housemade stracciatella and Turkish pistachio powder. Pasta sauces will include a lamb ragu with Lebanese-style lamb sausage, mint, parsley and za’atar-spiced labneh. For dessert, there will be selections like roasted pineapple sorbetto with lime zest, vanilla and a Tajín rim.

Leo Robitschek, who previously made drinks at Eleven Madison Park, will help set the tone at Superfrico with cocktails like a pandan-and-coffee tequila Negroni, the Under the Host Martini (a dirty martini riff with a housemade vermouth bianco-based brine infused with Castelvetrano olives and white balsamic vinegar) and the Penguins Take Manhattan (with black sesame-infused bourbon, rum, sherry and Cynar, served in a white chocolate and sesame-dipped coupe), which is named after Superfrico’s “two striding mascots.”

“Deliciousness is absolutely core to what we do, but we also want to be fun,” says Spiegelworld founder Ross Mollison. “And that doesn’t mean we’re going to put a plastic fish with LEDs in it, floating around your plate while you’re eating barramundi or whatever. It’s about making the complete experience of food, of beverage, of entertainment, as great as you can make it. Does that mean five-star dining? No, it doesn’t to me. It’s not white tablecloth. It’s about relaxing into your night.”

Performers from the show next door may pay a visit to the restaurant.  Photo: courtesy Eric Kabik

Superfrico is meant for the kind of grown-ups who come to Vegas and enjoy one of Spiegelworld’s ribald and campy shows with burlesque, circus-themed or even cosmically silly sci-fi elements.

“When we do a restaurant next door [to Spiegelworld], we want it to assist in creating that party,” Mollison says. “You’re going to have this delicious Italian-American cuisine, and there’s going to be some things done in a way that you maybe haven’t seen before.”

Performers from Opium might pop by, “get lost in the restaurant” and have impromptu encounters with Superfrico guests, but Mollison stresses that this isn’t dinner theater.

Semantics matter to Spiegelworld. Mollison’s title is Impresario Extraordinaire, which might work well in the world of Vegas swagger but hits a little different when you see it on a LinkedIn profile. Superfrico’s food-and-beverage team includes International Pizza Czar Anthony Falco (a prolific globetrotting consultant who was a keynote speaker at last month’s International Pizza Expo 2021 in Vegas but whose bona fides have recently been challenged), executive chef Mitch Emge and Principal Pourer Robitschek.

Emge cooked at Rose.Rabbit.Lie, the supper club with Spiegelworld entertainment that previously inhabited the Superfrico space. But Mollison says that Superfrico (with a kitchen that will also make food for the Opium theater) isn’t a supper club.

“A supper club is where my nana goes,” he says. “She gets a blue rinse done, gets a frock, puts on some pearls and goes out.”

What Mollison is aiming for at Superfrico is a different kind of “immersive experience” with art, design and a little entertainment commingling with fun food and cocktails. He doesn’t want to give away too much, but every room of the restaurant will have a different theme and a different purpose.

“It’s really about playing with people’s expectations and for them to come in, not knowing what they’re going to get,” he says.

A piece of art commissioned for the restaurant.  Photo: courtesy Adehla Lee

There will be a heavy emphasis on art.

“The whole thing started with us commissioning a Brooklyn artist, Adehla Lee, to create a painting for us to inspire the whole idea of Superfrico,” Mollison says. “I think it’s interesting because we say Italian-American Psychedelic, and people say, ‘Where’s the psychedelic? Are my potatoes going to be fluorescent pink or something?’ They’re not. The psychedelic is about everything, the art, the walls. I think visual overload sounds, in a way, like too much. But every piece of art is like a little Easter egg of discovery.”

Lee’s work, a vibrant and deeply colorful piece known as Psycho Pop Party, is a statement of purpose. Walk through Superfrico’s purple doors and you’ll get a feast for the senses. That’s the point. Other artwork will include a sculptural painting by Matthew Day Jackson, and Mollison says that guests can also expect a roof and walls “that have been totally rendered by an artist, so everything sits on an artwork.”

It’s a bit out there, but just as Mollison planned. As he says, “It’s all about creating a somewhat different experience than what you’ve had before.”