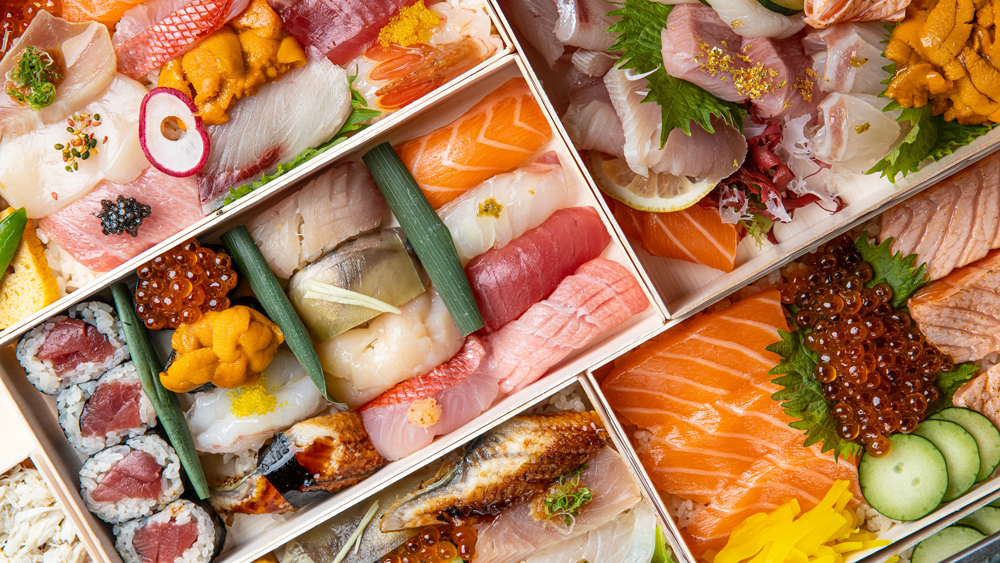 Like so much of their industry, prolific LA restaurateurs Russell Malixi and Wade McElroy were at an unenviable crossroads last summer. The numbers were down at Ma’am Sir, the wonderful modern Filipino restaurant they had opened with chef Charles Olalia in Silver Lake. They believed in the food they were serving. Olalia’s vibrant cooking had garnered national recognition. But this pandemic version of Ma’am Sir, without a late-night weekend-party vibe and patrons lingering with cocktails while music played on the speakers, no longer seemed viable.

Ma’am Sir closed in August. In December, Malixi and McElroy opened Sunset Sushi in the same space. This was the second sushi restaurant they debuted during the pandemic: The smaller and more casual Ichijiku in Highland Park had opened in August.

What the team at Sunset Sushi and other sushi slingers learned in 2020 is that raw fish is a viable pandemic-takeout option for multiple reasons.

But perhaps the most important reason is that a beautiful box of sushi feels like a celebration.

“There’s something special about opening a sushi box that’s resonating with people right now because they’re trapped in their homes,” says McElroy, who adds that there are many great dishes like pasta that don’t translate as well for takeout.

Julian Hakim of Shōwa Hospitality, which opened Sushi Tama in Beverly Grove with chef Hideyuki Yoshimoto in August, echoes this sentiment. Hakim also runs Mexican restaurants (with locations that include San Diego, Las Vegas and Austin) and has realized that takeout tacos don’t travel as well as sushi, which can evoke a jewel box when done correctly.

“People are looking for really nice experiences during such a depressing time,” Hakim says. “They’re looking for treats. The quality of the fish and the rice and everything we have [at Sushi Tama] is extraordinary, but it’s also the packaging and how everything has been thoughtfully planned to make sure the experience is complete. It almost feels like you’re opening a present when you open one of the boxes.”

Sushi Tama paid special attention to its packaging, having it shipped overnight from Japan to avoid the kind of delays Covid-19 has caused in cargo shipping. Yoshimoto, who previously worked at Tokyo’s Tsukiji seafood market, fills boxes with glistening, mostly Japanese fish and uses the traditional techniques he learned in Japan without any unnecessary flourishes.

“It’s important to make sure the taste of the ingredients is not lost,” he says.

One beautiful option at Sushi Tama is a take-home set, designed for two people, that features 20 pieces of nigiri, seared toro skewers and bara chirashi that sparkles with precisely cut fish and ikura. Yoshimoto is very specific about all the details, including a strain of rice he’s personally chosen and a vinegar mixture only he has.

This level of care is another reason why takeout sushi has become such a hit during the pandemic. Making great sushi at home is challenging.

“Even though sushi in some ways is simple, it’s still complicated,” McElroy says. “I think home chefs don’t want to make sushi vinegar and buy all these ingredients and make big batches of rice.”

And even if you wanted to, you wouldn’t be able to procure the exact ingredients a stellar sushi restaurant can. KazuNori, the hand-roll specialist that’s a spin-off of Sugarfish, recently unveiled a festive hand-roll kit that feeds three to five people. The seaweed in the kit is selected and roasted specifically for KazuNori and Sugarfish, and the signature warm rice is perfect even after spending half an hour in your car.

Sushi, sashimi and chirashi have become a pandemic success story in many Los Angeles neighborhoods, from famed chef Mori Onodera’s new Morihiro in Atwater Village to dry-aged fish expert Liwei Liao’s The Joint in Sherman Oaks to underground sensation Nam Yimcharoen’s KinKan in Silver Lake to modern omakase stylist Mark Okuda’s The Brothers Sushi in Woodland Hills. What all these places have in common is a flair for the dramatic: They make beautiful takeout that feels purposefully over-the-top. It’s a celebration and an escape.

And it’s a way for chefs and restaurants to survive.

“We’re only doing takeout and realizing, wow, we can make this work, even though it’s very far from ideal,” Hakim says of Sushi Tama. “But I think there’s going to be kind of a residual PTSD after this. It’s not just like, reopen the world, you know. Takeout is not going to disappear.”

Hakim says Sushi Tama might never have tried takeout if the circumstances were different. But it’s now like the genie is out of the bottle and has been busy handing out gorgeous chirashi boxes. Yes, sushi restaurants are looking forward to the day when they can have chefs hand pieces of fish to customers during a proper dine-in omakase. But they also know that the ways they’ve adapted during the pandemic will continue to be relevant after things get back to normal.

“People miss restaurants and that social experience,” Malixi says. “That’s of course the ultimate goal at Sunset Sushi, to have people sitting at the sushi counter and drinking some highballs.”

“Everyone is limited to firing on one cylinder right now,” McElroy adds. “We really find it exciting and interesting that we have this to-go component. I would love to keep this going. And once things reopen, we can also have the whole sushi bar experience and build a real cocktail program and have a vibe. But right now, everybody is just trying to get through the storm. And I think takeout will be here to stay.”