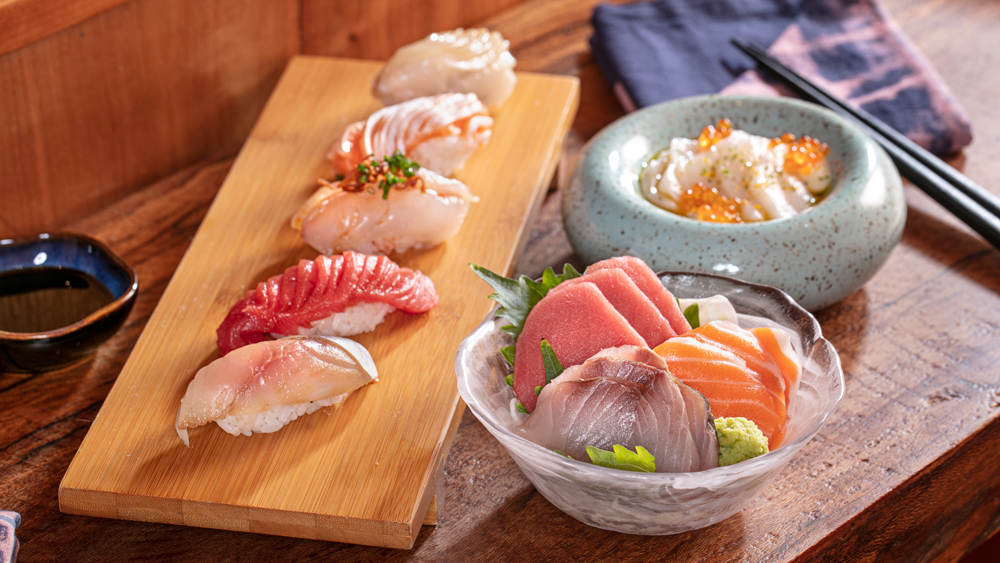 By design, the omakase at Rosella in New York’s East Village would be almost unrecognizable to the city’s sushi purists. Chef-owners Yoni Lang and Jeffrey Miller save tuna scraps and bloodlines to make smoked tuna butter to toss with handmade noodles. Bright, rich bowls of laksa broth are fortified with shrimp heads and shells, and sake-poached mussels star in one of the meal’s most memorable nigiri. There’s also dessert, two of them.

The 17 or so courses are “closer to a hybrid of sushi omakase and a kaiseki meal,” Lang says. “When you sit down for traditional Japanese sushi, you know what you’re getting. You’ll have mackerel, white fish, three types of salmon, tamago, and lots of bluefin tuna. We go a much different route.”

That route is dictated by sourcing. Rather than importing the majority of their fish and mise-en-place from Japan, as most high-end sushi restaurants do, Lang and Miller’s menu is driven by local produce, whole fish utilization and a mostly domestic roster of fish.

“We’re not environmentalists, yelling at everybody using plastic, but we feel strongly about sustainability,” Miller says. “We believe that using healthy stocks of fish tastes better.”

Lang and Miller first worked together at Tyson Cole’s Uchiko in Austin, Texas, where they both sought out Chef Masa Hamaya, who had traditional sushi training but also embraced Western ideas. “He beat into us good practices but also taught us to think for ourselves,” Miller says. In that setting, the duo began to develop their own style and ideas about sourcing, and after cooking on separate coasts for years, Lang and Miller reunited in New York and opened Rosella last fall.

Over the past few decades, as it has become clear that the ocean and the world’s wild fish stocks are imperiled, sustainable seafood has become a mainstream movement. “Giants like McDonald’s are serving Marine Stewardship Council-certified fish, and Walmart, Target, Whole Foods and lots of independent restaurants are on board,” says Bun Lai, one of the country’s first chefs to embrace sustainable seafood.

In the late ‘90s, Lai began experimenting with plant-based sushi, and in 2001, at the recently shuttered Miya’s in New Haven, Connecticut, he replaced tuna, yellowtail and freshwater eel with domestic seafood from well managed fisheries. Lai has also worked for years with invasive species like lionfish, Asian carp, shore crabs and knotweed, and with Miya’s closed, he’s planning a line of hot sauce, tea and sake made with invasive species.

The world of high-end sushi has been particularly slow to change. “So much of Japanese cuisine is built around tradition, doing things the way they’ve always been done. That’s part of the reason elevated Japanese cuisine is so good. There have been generations of refinement,” Miller says.

Tradition plays a part, but so does American demand for premium fish, as well as an established supply chain that profits from flying the ocean’s most coveted species across the globe to a sushi counter near you.

“In his documentary, chef Jiro laments the disappearance of the fish in the ocean, yet he still serves bluefin tuna in his restaurant. All the famous sushi chefs—Nobu, Masa and Morimoto—serve bluefin tuna,” Lai says. “Tradition has never been a barrier to change for these wildly imaginative chefs, who have boldly innovated the cuisine of sushi, but greed and a lack of guts have been. Change would happen more rapidly if these chefs made sustainability a guiding principle of their cooking.”

Of course, not all traditional species are endangered, but if they’re coming from Japan, they still require a fuel-intensive international flight. Bivalves, including clams, oysters, mussels and certain scallops are good choices, as are uni, most mackerel, and small fish like anchovies and sardines.

However, sardines don’t exactly scream high-roller omakase like the imperiled stocks of eel and Atlantic salmon, halibut and cod. Decadent bluefin tuna is in a category all its own. “It’s like eating a cheetah,” says Jennifer Telesca, a professor of environmental justice at Pratt Institute and the author of Red Gold: The Managed Extinction of the Giant Bluefin Tuna. Telesca spent years in the field observing the International Commission for the Conservation of Atlantic Tunas (ICCAT). “Part of the issue is that ICCAT is a global trade organization masking itself as an environmental one,” she says.

ICCAT dictates how many pounds of bluefin tuna nations and their fishing fleets can harvest in international waters. Its system, and bluefin’s hefty market value, incentivizes fleets to catch smaller bluefin before they reach peak maturity and reproductive capacity. “Fish aren’t people. The older and bigger a fish is, the more it contributes to future generations,” she says. “As a kid, I remember seeing giant bluefin, these extraordinary creatures, off Montauk. But we’re not regularly catching giants anymore.”

Farmed bluefin aren’t a solution either. Bluefin ranchers catch whole schools of fish and carefully bring them back to cages. Then, to feed the fast-swimming, carnivorous tuna, they harvest smaller species, which further contributes to overfishing.

The Atlantic bluefin tuna population fell to 13 percent of the levels recorded in the 1950s, but there’s lots of confusion and misplaced hope around the idea that bluefin stocks are rebounding; there’s also commercial interest tied up in that premise. The Marine Stewardship Council (MSC) certified Mediterranean bluefin as a sustainable species this summer, and the National Oceanic and Atmospheric Administration (NOAA) lists U.S.-caught Western Atlantic bluefin as a smart seafood choice, which led Lang and Miller to include the fish on their menu.

“We thought about it for a long time, and it’s a challenging threshold to cross. To some degree, if we are what we say we are and want to support local fishermen, we have a responsibility to use such a well regulated product,” Miller says. “But if the facts change, we will change with them.”

Agencies like NOAA have conflicting duties to manage fisheries and promote economic growth, and their advice reflects that entanglement, according to Telesca. Bluefin populations may appear to be stable in the United States, but NOAA also notes that “the population level is unknown for bluefin tuna in the western Atlantic.” The powerful fish travel fast and far. They can cross the Atlantic Ocean, through international waters, in 40 days, and no bluefin falls under the jurisdiction of any one nation state.

“It’s creative accounting. That is, the management of the bluefin is as corrupt as it is perfectly legal,” Telesca says. “After decades of adopting this approach, the result is an ocean emptying of big fish.”

While bluefin is a staple of traditional sushi, Japan is home to a number of regional sushi styles that could serve as a model for sustainable sushi in America—if diners could quell their appetite for endangered species. “In Kochi prefecture, a mountainous part of the country, there are many recipes for vegetable-only sushi,” says Yoko Isassi, a Japanese food educator and cooking instructor. “There’s also fish on okara, a soy fiber that’s leftover from tofu making, which I found quite delicious!”

Local sourcing and seasonality are paramount in Japanese cuisine, and there’s a case to be made for American sushi chefs who establish their own regional identity. Lang makes miso from Pennsylvania-grown sunchokes and pickles and kimchi from New York State produce. Miller has experimented with a 100 or more species, at different times of the year, to better understand the rhythms of seafood in the Northeast.

Sourcing sustainable sushi grade fish in a country without thousands of years of tradition takes trial and error. Take blue fish, a locally abundant species, whose peak season is fall. “If you order blue fish in spring, you get this lean fish that lives up to its undeserved reputation as fishy and unpleasant. I didn’t know what ordering fish out of season meant, until I tried to serve blue fish in spring,” Miller says.

Lang and Miller also believe that farmed fish is part of the solution, and they include steelhead trout from Hudson Valley, Icelandic arctic char, and Danish amberjack on their menu. These well-managed operations are important to preserving wild fish stocks while feeding America’s appetite for sushi and seafood. Fish farms aren’t a panacea, though. They can also contribute to pollution, overfishing, and disease.

There’s no perfect choice for chefs and consumers, but there are ways to make and consume sushi more sustainably. It’s better to imperfectly wade through regulations and recommendations, adapting as we learn, than to ignore the crash of wild seafood stocks and the environmental cost of the global seafood trade.

“Fisheries and the restaurant industry respond to how we eat and how much we spend on what,” says Isassi. “Spending a few hundred dollars at a sushi bar is mainly supporting wild-caught fisheries. As wild-caught fish and farm-raised fish taste quite different, I would never suggest entirely giving up on eating at fancy sushi restaurants. But we can always reduce the number of visits to those kinds of restaurants.”

“Today, many chefs know that it’s not enough to make the tastiest, prettiest food. We also have to understand the impacts of our food,” says Lai. “The sustainable sushi of the future will address a wide range of environmental and social issues.”