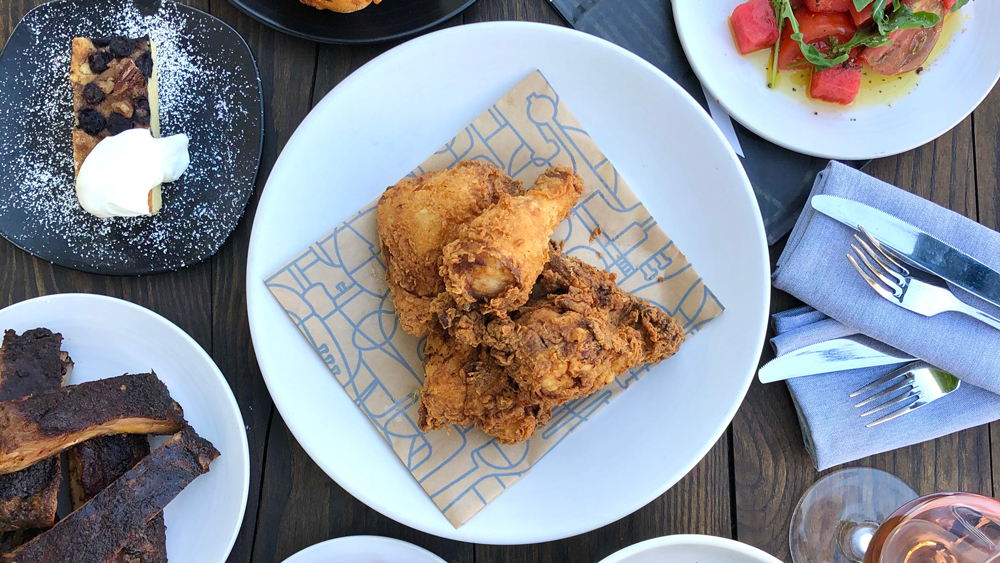 The first season of the Hollywood Bowl started on July 11, 1922, with a performance by the Los Angeles Philharmonic. Enjoying live music at the amphitheater has since become a summer-defining experience for so many Angelenos. But this year, the music stopped.

If you want to understand how unprecedented 2020 is, consider this: In 98 years, nothing, not even the Great Depression or World War II, caused the Hollywood Bowl to cancel its summer season. And then Covid-19 happened.

Summer without Hollywood Bowl shows is “just so strange,” said Suzanne Goin, the James Beard Award-winning chef who’s been in charge of the food at the iconic venue since 2016. “I think it’s so very symbolic of the time right now where a lot of the joy and pleasure has been sucked out.”

But Goin and Caroline Styne, the James Beard Award-winning restaurateur who’s been the chef’s longtime business partner, have kept the culinary joy alive at the Hollywood Bowl. So one of the best takeout menus and one of the most unlikely curbside pickup situations in Los Angeles is in Lot A of the Hollywood Bowl, right off the 101 freeway.

“For the first time ever, the Hollywood Bowl parking lot is a good thing,” Goin said. “People always associate it with that stacked parking.”

Now the lot is largely empty, and guests can pre-order Goin’s famous Spanish fried chicken along with three-course dinners headlined by main courses like Alaskan halibut with grilled eggplant, sweet peppers and charmoula. Other options include steak, pasta, grilled vegetables and a barbecue feast for two with ribs, brisket, sweet-tea-brined fried chicken and sides. Pickups are Thursdays through Saturdays from 4 p.m. to 7 p.m.

Because this is Goin, a chef who’s long been known for merging California ingredients with Mediterranean influences, the Hollywood Bowl menu screams summer with beautiful produce and bright sauces. There’s a summer fruit salad and also an heirloom tomato salad with marinated labneh, arugula, opal basil and zhoug.

“I love summer produce,” Goin said. “My thing always is, I basically cook the food I want to eat.  It’s just like fruit and tomatoes and basil and herby olive-oily sauces.”

You can’t dine inside the amphitheater this summer, but you can go to one of the Hollywood Bowl’s picnic areas. Or, Goin suggests, take the meals home and eat outside with some music playing. She’s calibrated this food for summer evenings and a picnic-style experience.

“I always think about when people are eating at the Bowl,” Goin said. “You’re sitting outside. It’s probably still warm while you’re eating. So we’re trying to keep things really fresh and bright. And hopefully you feel satisfied and you feel good after you eat, but not in any kind of spa diet sort of way.”

Make no mistake, Goin isn’t dialing back her bold flavors. Her Spanish fried chicken involves cutting boneless skinless chicken thighs into long strips and then marinating the strips in Aleppo pepper, cumin, coriander, garlic, paprika, salt and pepper. Then they’re soaked in buttermilk and coated in flour that’s seasoned with cayenne pepper and paprika. Then they’re deep-fried before being finished in a butter that has more garlic, chiles de árbol, cumin, lemon and parsley. The chicken comes with romesco aïoli for dipping.

Some other clear signs that this isn’t spa cuisine include chocolate desserts and Styne’s extensive wine-to-go list with bottles of reds, whites, roses and sparkling selections. There’s even a package with one wine from each category.

Goin, who grew up in LA, remembers going to the Hollywood Bowl as a child. Her parents would bring their own picnic dinner and martinis they put into jam jars. There were nights when she would fall asleep under a blanket as music played. Trying to recreate the experience of the Hollywood Bowl at home might feel bittersweet, but at least you know Goin’s food will be great and you won’t have to wait an hour for an Uber to get home. There’s something so very 2020 about how a place previously associated with hellish gridlock is now one of the easiest and most stress-free ways to pick up food in LA.

You can also get Goin’s food this summer at A.O.C., the Beverly Grove restaurant where her Spanish fried chicken originated. A.O.C. has converted its parking lot into a second patio, so there’s plenty of space for outdoor dining. The restaurant reopened recently with a Wednesday-through-Sunday dinner schedule, but business has picked up enough that A.O.C. quickly added Tuesdays and will add Mondays starting on August 24. The restaurant is also serving brunch on Saturdays and Sundays.

“That’s the closest thing to feeling like normal that we have going on,” Goin said. “Of course the dining room is empty, and there are no parties upstairs. But we’re definitely very lucky.”

Goin and Styne are also offering takeout at their Lucques Catering business, which has recently served barbecue feasts, lobster boils and Moroccan chicken dinners. Goin and Styne are actively renovating Tavern, their Brentwood restaurant, and hope to reopen it soon after dine-in restrictions end in LA.

“We don’t have outdoor seating there,” Goin said. “We’re lucky we have a great landlord, Topa, who has been really accommodating.”

Goin brings this up because she, like so many chefs and restaurateurs, wants to make it clear that most restaurants will not survive the pandemic without assistance. She’s been an active part of the Independent Restaurant Coalition’s efforts to change the rules of PPP loans and lobby for the proposed $120 billion Restaurant Revitalization Fund. Goin was heartened after she reached out to Congresswoman Judy Chu, who listened to the Independent Restaurant Coalition’s concerns and is fighting to save restaurants.

Despite all the uncertainty in their industry, Goin and Styne are still working to open two restaurants, Caldo Verde and Cara Cara, at downtown LA’s forthcoming Proper hotel later this year. Caldo Verde will be a ground-floor restaurant with Portuguese-inspired food. Cara Cara will be a rooftop destination.

“It’s looking great,” Goin said. “I’ve been down there a lot. They’re talking about a theoretical opening in November. The issue is we don’t know how long outdoor-only is going to last. I was on a call yesterday trying to navigate it: Do you do something in the parking lot? Do you decide to do sidewalk only? And at what point is it financially viable? We have a lot of plans in place, plan A, plan B, plan C, but it’s definitely happening.”

Sometimes, of course, great things involve waiting a long time for a payoff. Goin had thought about serving Spanish fried chicken before A.O.C. opened in 2002, but she never got around to it until the restaurant changed locations in 2013. She remembers looking through her old notes and realizing that she should actually figure out how to make the chicken. The Spanish fried chicken is like a lost track that ended up being one of Goin’s greatest hits. LA is lucky that it’s still at the Hollywood Bowl during this surreal summer.