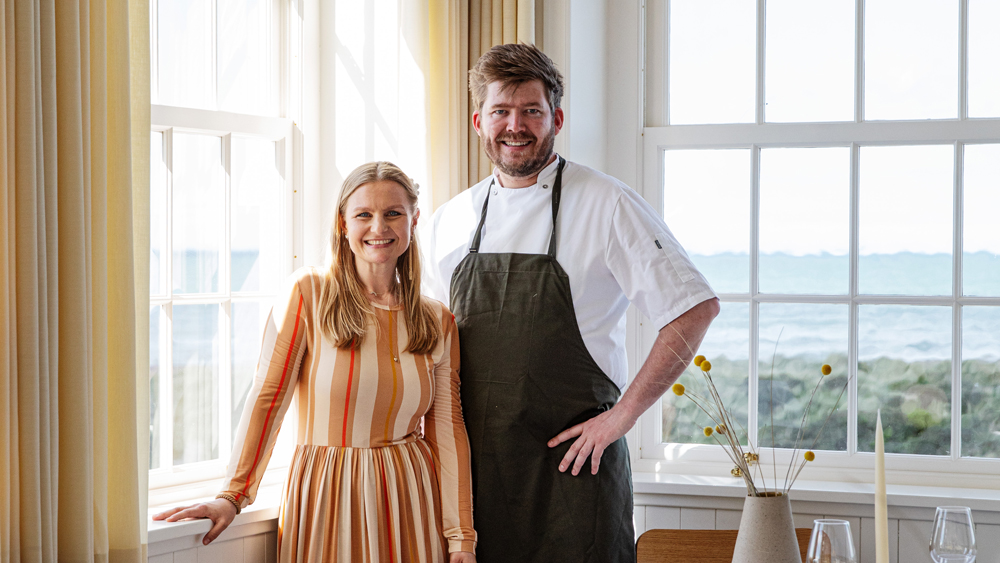 The night of January 30, 2019, Danish chef Kenneth Toft-Hansen was beaming for the cameras as he hoisted a chef-shaped trophy over his toque-topped head. The 37-year-old had just competed for and won one of the culinary world’s top prizes, the Bocuse d’Or, in Lyon. Though he was all smiles in the moment, Toft-Hansen had spent the previous two years rebuilding, literally, his whole life.

Toft-Hansen first arrived at Svinkløv Badehotel in 2009 to helm the historic hotel’s restaurant for the busy three-month summer season. “I fell in love with the place and decided to take a season more,” the chef explains with a smile. “And then a season more and a season more.” In 2015, Toft-Hansen and his wife, Louise, took over the property, which is practically a national landmark. The stately edifice was originally built in 1925, and perches above golden, grass-dotted dunes on Denmark’s North Sea coast. Then it all burned down.

Constructed entirely out of wood, the iconic inn went up in flames the night of September 26, 2016, its structure completely destroyed. “Before the fire,” says Toft-Hansen, “we knew who we were. Then the building burned, and it sounds strange, but then who are you?”

After the conflagration, Toft-Hansen and his wife faced years of uncertainty dealing with insurance issues, negotiations with the foundation that owns the hotel, and the challenges of undertaking a massive reconstruction project in a protected nature reserve. But at the same time, Toft-Hansen had his heart set on competing for the 2019 Bocuse d’Or. The prize is one of the restaurant world’s highest honors and is only awarded once every two years. He had come in sixth place previously, which was a huge disappointment. “This was my dream that became a devil to me, and I had to get rid of it,” he admits.

At the same time as the couple undertook reconstruction of Svinkløv Badehotel, Toft-Hansen set up a training kitchen in Copenhagen. He enlisted the help of Rasmus Kofoed, chef-owner of Michelin three-star Geranium, and Denmark’s only other Bocuse d’Or winner. “Rasmus texted me after the fire,” says Toft-Hansen. “He said, come on, Kenneth, if you do it, I will coach you.”

Toft-Hansen spent five days each week honing his kitchen skills while training with a team of young chefs and incorporating Kofoed’s guidance. “The first year, Rasmus and I needed to learn each other—it was like two lightning bolts striking each other,” says Toft-Hansen. But those differences enriched both the experience and their own personal friendship, he says.

One of the winning dishes in the culinary Olympics.  Photo: courtesy Svinkløv Badehotel

The other two days a week, Toft-Hansen assisted Louise with the reconstruction project, bringing the same intensity, attention to detail and work ethic to the hotel. “When you are competing for the Bocuse d’Or,” he says, “you have to work extremely hard and cannot compromise. The same is true whenever you want to do something special—if you are ready to make compromises, that’s where things start to go wrong, and someone better than you will come along.”

It was the first, but not the last way Toft-Hansen’s chef’s training came in handy with the undertaking.  “We asked ourselves, can we build like we cook?” he explains. “We spend a lot of time on the craft of cooking—the technique and everything else that goes into the food.” When he was running the Svinkløv restaurant, that meant utilizing local products like fish and seafood caught right off the coast and incorporating every part of every animal they purchased into the menu items. With the reconstruction, they made sure to hire local builders who could help them carry out their vision of restoring the hotel to its former glory while integrating sustainable elements whenever possible.

The process was still well underway when Toft-Hansen traveled to Lyon for the Bocuse d’Or finals…just two days after his wife gave birth to their baby son. Rather than an additional hurdle to overcome along his path to glory, though, it became just another occasion for Toft-Hansen to celebrate.

Over the course of five hours and 35 minutes, Toft-Hansen and his commis, Christian Wellendorf Kleinert, set to work on the two assigned dishes. The first was a new take on a classic French chartreuse. The dish typically includes meat and vegetables cooked in a decorative mold. For his iteration, dubbed “Mother Nature,” Toft-Hansen showcased shellfish including oysters, scallops, blue mussels and white clams with aromatic herbs like tarragon and puntarella, green apple and ornamental shells.

For the plat principal, chefs were required to prepare a roasted rack of veal with three garnishes and one sauce. Titled “Flora Danica Winter,” Toft-Hansen’s platter was equal parts eye-catching homage to Denmark’s colorful plants and love letter to the first sprigs of spring. A five-pronged rack was balanced above a veritable garden of carefully sculpted delicacies including kohlrabi leaves with smoked snail’s eggs, rose-shaped beets and butterflies made from Jerusalem artichoke and mushrooms with filigreed wings created from 3-D-printed molds. The dish resembled an edible spring awakening, and was a hint of the revival to come at Svinkløv Badehotel when it threw its doors open again a few months later.

Walking around the beach-chic building today, it’s hard to believe there was ever a fire. The place retains a historic ambiance thanks to the replication of its original architecture. Inside, whitewashed wooden floors and walls reflect bright northern light filtered through handmade windowpanes that were specially treated to look slightly blurry and antique. But you might also notice solar panels out back.

The hotel reopened from its seasonal winter closure as usual, well after Denmark managed to get its Covid-19 pandemic under control. The restaurant is back to full operation, and all 36 rooms are available for reservations, though they are booked out for the 2020 summer season. Casually clad servers shuttle between the kitchen and the airy dining room, its tables covered in white cloths, gently lit by overhead Louis Poulsen fixtures, and flanked by midcentury modern-inspired wooden chairs. The aesthetic practically embodies laidback Nordic hospitality at its purest. “We want people to relax, and try to create an atmosphere where they have a nice summer memory of coming here,” says Toft-Hansen.

The setting alone makes that goal achievable. But as you might expect, the food is also a key component. “I had been here 10 years,” says Toft-Hansen, “so I thought about what had worked and how to go back to those old, good dishes and keep them on the menu.”

That doesn’t mean boring, though. The menu changes frequently so that guests staying in the hotel will find a new “inspiration” every day, according to Toft-Hansen. Depending on when you visit, you might find mouthwatering morsels like North Sea scallop tiradito with avocado, lime and coriander; or plaice caught that day and pan-fried with fresh vegetables and potatoes.

The fare might not be as fancy as the Bocuse d’Or judges sampled, but that’s okay with Toft-Hansen.“It’s a closed chapter—I don’t need to go or compete again.” Instead, he said he is looking forward to accepting some of the invitations to cook around the world, including Asia and Australia, that have poured in. “When we close down after the summer,” he says with an exhausted grin, “we need a bit of vacation.” After all Toft-Hansen, his wife and his colleagues have achieved in the past few years, it’s a well-deserved one.