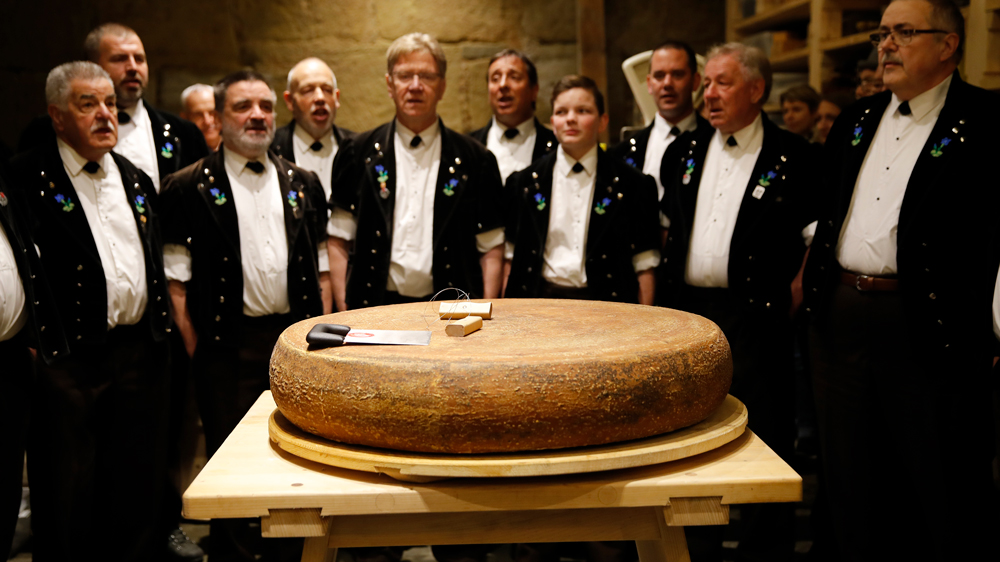 What goes with a nice wheel of Emmental? Perhaps a rare Swiss Müller-Thurgau wine? And, apparently, A Tribe Called Quest.

That’s the news out of Switzerland, where students at the Bern University of the Arts teamed up with Burgdorf cheesemaker Kasehaus K3 to test the effect of music on the taste of cheese.

“Cheese In Surround Sound: A Culinary Art Experiment” aged eight wheels of Emmental (plus one control wheel) for six-and-half months, exposing each wheel to a different sound source. Three were sound waves (low, medium and high-frequency), and five were songs: Led Zeppelin’s “Stairway to Heaven,” A Tribe Called Quest’s “We Got (The Jazz),” Mozart’s “The Magic Flute,” Vril’s “UV,” and Yello’s “Monolith.” (The signs on the respective cheeses read “Rock, Hiphop, Klassik, Techno, and Yello,” as apparently the Swiss electronic duo is a category unto itself.)

According to the study, “the bio-acoustic impact of sound waves affects metabolic processes in cheese, to the point where a discernible difference in flavour becomes apparent…Put simply, cheese that has been exposed to music tastes different.”

Rather than placing the cheese on a recliner in front of a JBL Century L100 speaker, mini-transmitters were put inside the cheese wheels while they aged. The Emmental was then evaluated by food technologists from the ZHAW Zurich University of Applied Sciences, as well as a blind tasting panel, including award-winning cheesemaker Anton Wyss, the mayor of Burgdorf, and two chefs.

Obviously, ATCQ and “We Got (The Jazz)” produced the best result. The A Tribe Called Quest cheese “displayed a discernibly stronger smell and stronger, fruitier taste than the other test samples,” the study claimed.

Swiss TV chef and jury member Benjamin Luzuy told told AFP that the hip-hop cheese had a “softer, more floral” taste, but that he actually dug the Mozart best. “Maybe a sweet little classical music, it does good to the cheese,” he said

According to a Morning Edition report from last fall, Kasehaus K3 owner Beat Wampfler “had pinned his hopes on the hip-hop cheese to taste best,” which is probably to be expected from somebody named Beat (it’s pronounced “Bay-et,” alas). Wampfler also told Reuters there would be a follow-up study: this time using only hip-hop songs.

However, the findings of the food technologists were somewhat less definitive than those of the tasting panel.

“In general, it can be confirmed that the discernible sensory differences detected during the screening process were minimal,” the ZHAW report said. “The conclusion that these differences did indeed confirm the hypothesis, namely that they can clearly be traced back to the influence of music, is conceivable, but not compelling.” The scientists don’t sound nearly as fun to hang out with as Beat Wampfler.