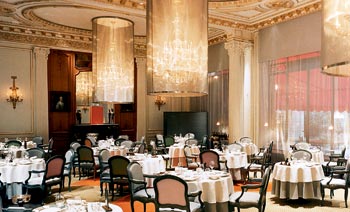 You do not walk, stroll, or saunter when entering Alain Ducasse au Plaza Athénée, the chef’s fabled three-star restaurant in Paris. Au contraire, according to one advisory from the Ducasse organization, “Guests glide, as if imperceptibly, from the Plaza Athénée’s majestic vestibule to the bright setting of the restaurant.” This probably takes practice so, unsure of our glide, we made our way to the table in our usual fashion.

Look around the restaurant, and one thing becomes immediately clear: In his quest to remain on top of the culinary world, Ducasse does not make things easy on himself. To be sure, with its soaring columns, gilded ceiling, mirrored walls, and costly fabrics, the restaurant glitters with the formulaic trappings of luxury. But where these accoutrements reassure, others jar. By the time our waiter approached with glasses of Champagne Paul Drouet, we were wondering: Had Ducasse gone over the top, or just around the bend?

Not too long ago, much the same question raged across Manhattan. With the opening of his first establishment in the United States—Alain Ducasse at the Essex House in 2000—the restaurateur was ridiculed. It was silly, critics said, to offer a choice of five knives for entrées and gratuitous to provide little cushioned footstools for female guests’ purses. Likewise, the white-gloved waiters who snipped the verbena tea leaves with silver scissors were an affectation, and the idea of proffering a selection of Cartier pens for signing the tab was preposterous. As for the room’s pièce de résistance, a montage of tubas splattered with paint, everyone agreed it was a shocker.

Most critics relented and have since come to consider it the city’s most coveted dining experience. Meanwhile, Ducasse was enjoying smoother sailing in Paris, where he had relocated to the Hôtel Plaza Athénée. Within five months of its opening in 2000, his newest property received three Michelin stars.

Once again, however, he seems to be courting criticism. The stunning crystal chandeliers I had admired in this same space were now wrapped in translucent cylinders to resemble some extraterrestrial vacuum tubes that have dropped down to suck the tables into space. Farther beyond, a fluorescent orange clock the size of a hatbox was set atop a mantel to afford, according to Ducasse’s literature, “a perspective leading to the vanishing point, a link to infinity.”

Most jarring of all, however, were the life-size photographs of barefoot, pajama-clad models—one male, one female—hanging on either side of the mantel, thereby giving the wall the appearance of a Calvin Klein billboard. “Oh, them?” replied a waiter with a laugh. “They are angels.”

I chose not to ask why these appurtenances were there, or what Ducasse was trying to say with them. Perhaps they were intended to indicate a unity of old and new, or they were signals to check our preconceptions at the door. Or maybe this was Ducasse’s way of raising the bar, of challenging himself. For the simple fact was that if dinner proved to be a truly exquisite experience, then these departures from the norm would be sheer genius. If anything fell short—should our champagne be flat, a sauce be cloying, or a sommelier’s selection disappoint—then they would be little more than pretentious.

After finishing our meal, we tarried over glasses of Mas Amiel, an obscure yet highly prized wine, the French equivalent of a vintage port. Now there was just one last thing to do. We rose from the table and made our way toward the exit, passing the extraterrestrial vacuum tubes, the vanishing point, and the angels. And though it may have been imperceptible, as we left the room, we were gliding.