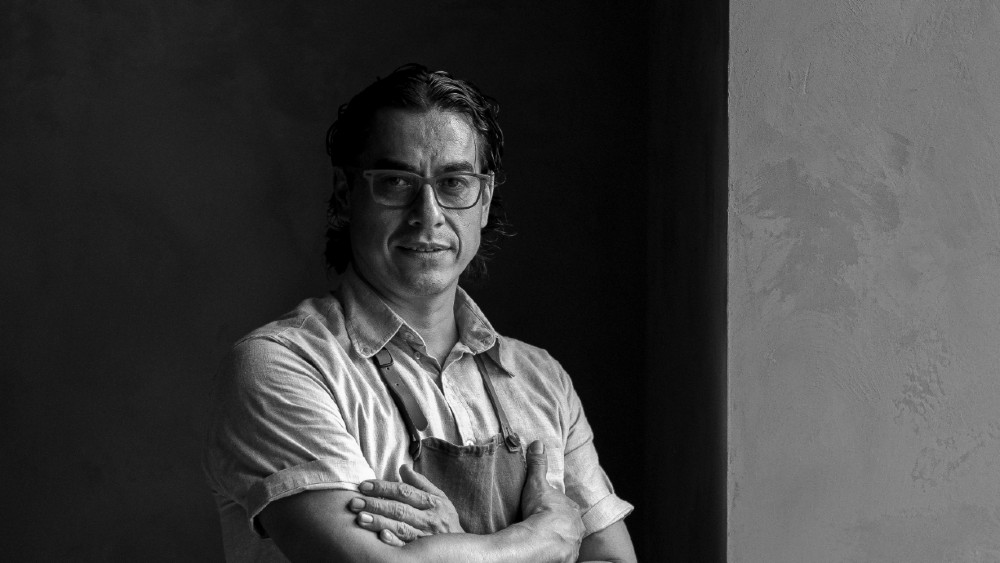 In 2018, chef Carlos Gaytán abruptly closed his trailblazing Mexican fine dining restaurant, Mexique, in Chicago and left the country. After a decade of world-class accolades—including a Michelin star two years in a row, the first ever awarded to a Mexican-born chef—it seemed like Gaytán was throwing his hands up and moving home.

But he vowed to return. And return he has.

After a short but productive foray in Mexico, he’s reappeared in Chicago, where he’s got an ambitious plan to open three restaurant concepts under one roof in a matter of months. He’s already two-thirds of the way there. Tzuco opened in September 2019, a 120-seat, energetic restaurant where Mexican and French cuisines combine. He followed that up in November 2019 with Panango, a colorful, grab-and-go panaderia or bakery.

Now he’s poised to open Tales of Carlos Gaytán in early March, which will be his most personal restaurant to date. It will only be open three days a week and will serve an 11-course tasting menu. The dining room is tiny; it only has 12 seats.

“This one is very small, so it’s going to be detailed and execution is going to be more precise than everything else,” Gaytán said. “It will be very intimate.”

Tales is what the evolution of the chef’s counter looks like. Now, instead of being an in-the-kitchen VIP experience, it’s a spinoff dining concept with its own name, entrance, small kitchen and identity. Tales will have a fixed menu, but the dishes will change consistently. Plates are inspired by the chef’s childhood in Huitzuco, Guerrero (Tzuco is a shortened version of his hometown’s name) and life of travels. It’s like a one-man play, with food. It’s dinner theater.

“Every dish is going to have a story behind [it]. It’s about me,” he said.

Those stories will include how he learned to cook from his mother, Doña Teté, when he was a child in the 1970s. Back then, he and his parents foraged for wild ingredients, hunted game and butchered animals. Then, in the 1990s, he moved to Chicago as an undocumented immigrant, taking a job as a dishwasher at the Sheraton Milwaukee North Shore Hotel. The chef there took note of Gaytán’s work ethic and plucked him out of the dish pit and dropped him onto the line, teaching him more polished cooking skills. Gaytán later moved on to the private Union League Club of Chicago, and then Bistrot Margot, where chef Dominique Tougne taught him French technique.

The 12-seat dining room has its own kitchen.  Photo: courtesy Diego Padilla

In 2008, he opened his first restaurant, Mexique, which served Mexican dishes prepared with French precision, a unique style that hadn’t been done in the U.S. before. Located in the up-and-coming West Town neighborhood before it was neither up nor coming, the restaurant struggled. Yet, he was awarded a Michelin star in 2013—the first ever given to a Mexican chef—and in 2014, which bolstered business. However, in 2018, a decade after opening, he announced Mexique’s closure. That same week he returned to Mexico, yet promised to come back to Chicago with a different focus.

In Mexico, he got right back to work, opening Há inside the Hotel Xcaret Mexico in Playa del Carmen. And he began linking up with the best specialists in their respective fields: Jesús Escalera, who was named “Latin America’s Best Pastry Chef” in 2018 by the World’s 50 Best Restaurants; Mica Rousseau, a Mexico City-based bartender who was heralded as the country’s top mixologist in the 2016 World Class competition; and Ignacio Cadena, a contemporary restaurant designer responsible for Hueso in Guadalajara and La Leche in Puerto Vallarta.

He also gathered young Mexican chefs and asked this all-star team to return to Chicago with him. He had a vision, and they could see it, too. They agreed.

“We are [taking] a very talented group, from investors to chefs,” he told the Mexican newspaper El Universal at the time. “It is a totally Mexican project in the United States.”

He bought the former Roy’s space in River North and began building out his restaurant project. Here, he would mentor Mexican chefs and continue to serve traditional Mexican dishes, but prepared with French technique, like he had done at Mexique.

“The flavors are going to be really related to home,” he said. “I’m super excited to have a lot of things on the menu.”

The opening menu at Tales will transport diners through time and place, like his venison tartare that comes served with Huitzuco cheese, pickled black trumpet mushrooms and huitlacoche (corn fungus) crostini.

“[I wanted the plate to] look like the fields where I used to go hunting with my father,” he said. “So, I got all the ingredients I remember that we used to have up there in the mountains like wild mushrooms. You get the feeling that you’re there.”

Other dishes include escamoles (ant larvae) with epazote (an aromatic herb), avocado and blue corn tortillas. He brings the escamoles directly in from Mercado de San Juan in Mexico City. Seared duck breast and duck leg confit will be paired with foie gras and mole poblano and served tetela-style, stuffed in a tortilla. Pork belly will be accompanied with chicharron (pork rinds), roasted sweet plantains and Yucatán chirmol (salsa).

He says putting the menu together at Tales made him miss Mexico, which he still visits every month. But he knows he’s in the right place for himself right now.

“It’s always been my dream to have such a small restaurant,” he said. “I really waited a long time and I don’t want to keep waiting. This is the time for me to do it.”