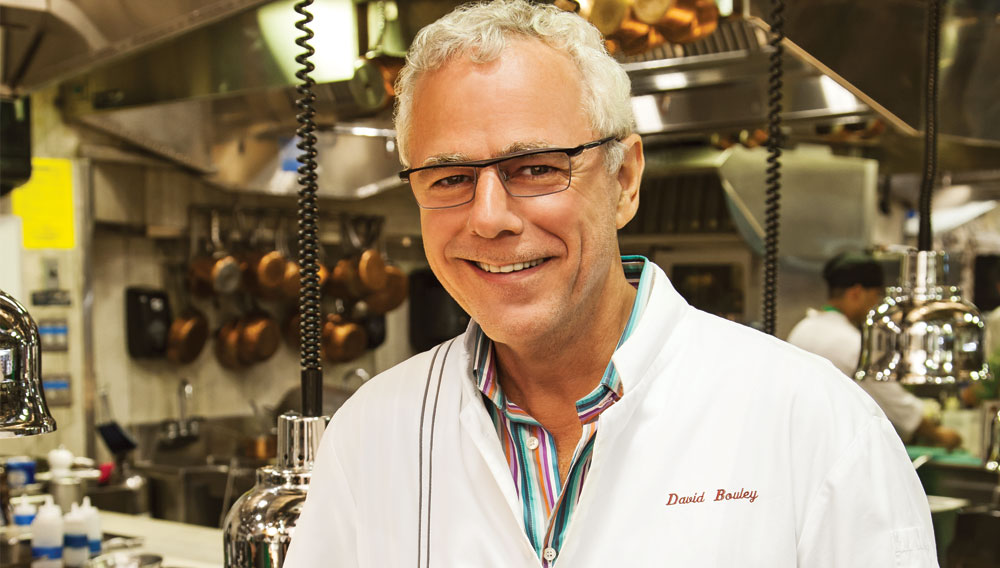 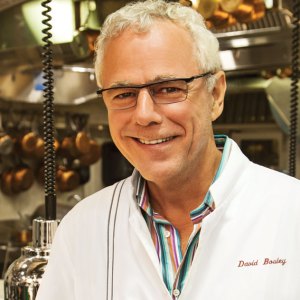 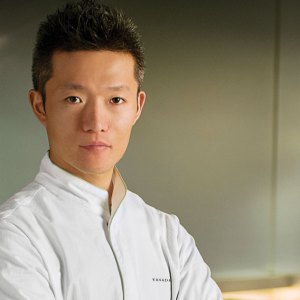 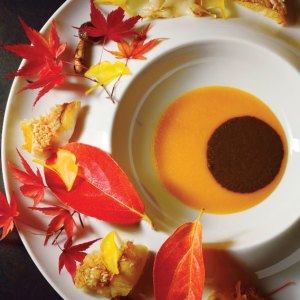 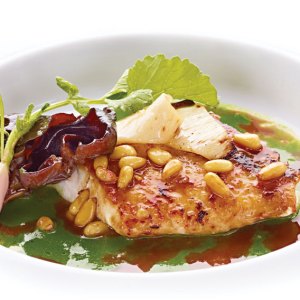 David Bouley has been at the leading edge of the U.S. dining scene for nearly 30 years. When he opened his first restaurant, Bouley, in the Tribeca neighborhood of New York City in 1987, he became one of the original chefs to introduce nouvelle cuisine and the menu dégustation to the United States. But Bouley’s vision extends far beyond the plate: Just as he expanded our notions of a menu by offering multiple, complementary courses in  a single meal, he also created a centralized, multi-platform gastronomic empire—a venue dégustation, if you will—that combines in one small corner of the city an ever-evolving array of ambitious restaurants and other culinary experiences. Over the years, his groundbreaking restaurants have included Bouley Bakery, an innovative take on French cuisine; Danube, a jewel-box tribute to Eastern European cooking; and a bakery, market, and restaurant project. Today, his culinary realm encompasses Brushstroke, a modern interpretation of Japanese kaiseki that is a joint venture with the Tsuji Culinary Institute in Japan; Ichimura at Brushstroke, an acclaimed eight-seat omakase bar; a test kitchen and culinary library; and the most recent addition, a “living pantry” called Bouley Botanical, where he grows hundreds of edible plants.

His signature dishes, such as porcini-mushroom flan with Dungeness crab and black-truffle dashi, meld French technique with Japanese touches—a natural progression, as the nouvelle cuisine that captured his imagination when he was training in France during the 1970s and ’80s was built upon the kaiseki tradition of small, ultra-seasonal courses that artfully balance taste, texture, and appearance.

This deep connection to Japan’s haute cuisine led Bouley to nominate Yoshiaki Takazawa for the Robb Report Culinary Masters Competition. “I was looking for someone who had a unique style and a strong sense of Japanese culture and cuisine,” Bouley says, “which is about nature, seasons, refinement, personality, and emotion.”

Takazawa, 38, attended Shinjuku Culinary Institute, studied French and kaiseki cuisines, and worked in yakitori shops and banquet halls. In 2005 he opened his own restaurant in Tokyo—a two-table establishment called Aronia de Takazawa, which grew into a four-table establishment with a two-month waiting list. Diners from all over the world flock to the minimalist restaurant, now called simply Takazawa, to experience such stunningly beautiful dishes as the Scene of Winter to Spring, which evokes that moment in Hokkaido, Japan’s dairy-cattle country. For this entrée, the chef places a chunk of veal atop a dollop of mushroom sauce speckled with milk foam and garnishes the meat with crisp veal sweetbreads and a puree of lily bulb. Takazawa agrees with Bouley’s conviction that a person who follows recipes cannot be a good chef. “I get inspiration from anything,” he says, “even just walking down the street.”

DAVID BOULEY: I ate at your restaurant a few years ago. We were a large group—Yoshiki Tsuji from the Tsuji Culinary Institute, one of my chefs, and my wife. I dined in 25 restaurants on that trip, so it’s hard to remember everything I ate, but I can still see some of your dishes and their presentation. I still remember how I felt about them. Your presentation was original, unique, and fun, and I loved the theater of your kitchen and dining room.

YOSHIAKI TAKAZAWA: I recall that you were very focused on the ratatouille, which is always on the menu along with 10 other signature and seasonal dishes.

DB: Oh yes, I remember the ratatouille dish clearly. It was served as a square terrine, wrapped in a gelée. I enjoyed that dish very much. Having worked five years in Mougins in the South of France, I felt at home with that dish. It had eggplant, tomato, bell pepper, maybe a zucchini.

YT: I use 15 kinds of vegetables and cook each one individually to maintain its original texture. At the end, I combine them all together as a terrine, arranged like a colorful mosaic. This dish and its flavors are meant to be enjoyed and experienced in one bite.

DB: It was a very clean dish. It re­­minded me a lot of the Mediterranean, which is the cuisine I love, and it showed your personal style, with beautiful presentation, beautiful colors, and lots of energy.

YT: I am really so excited to experience New York this fall. I haven’t been there in 11 or 12 years, and I would love to visit the suppliers and familiarize myself with the ingredients available at that time.

DB: We will be working with really wonderful vegetables, and the fish is excellent that time of year. I could help you source items through my farmers and fishermen—but we also have time to grow something for you, if you can give us the seeds. We grow some 500 or 600 herbs at Bouley Botanical, and some of those are Japanese.

YT: I have a similar close connection to my ingredients and suppliers. I go to the Tsukiji Market every morning to select the fish, and I have a farm in Odaiba, about 20 minutes from my restaurant, and I harvest the produce myself.

DB: I am also a chef-owner. I don’t have any business partners, so I am here at Bouley with my own projects. Now we are working more and more with doctors and nutritionists to develop dishes that have substantial nutrient density and to create long tasting menus that still feel very light. We are trying to make the most seasonal food, but we are also trying to make it healthy. I think this is a big responsibility in gastronomy. And there has been a lot of inspiration from the Japanese kaiseki cuisine because of the health benefits.

YT: Kaiseki has become very fashionable in the gastronomical world.

DB: Keep in mind that the French learned about kaiseki in the 1960s and 1970s, and when I was working in France in the 1970s and 1980s, there was the nouvelle cuisine movement. That created the menu dégustation, which is directly derived from kaiseki. So the Japanese have been influencing the Western world for a long time.

YT: My own culinary philosophy was inspired by the Japanese tea ceremony. Even if I cook in a different place or the ingredients differ, I can customize the menu for my diners. I want to create an unforgettable dining experience for everyone in the world.

DB: We have customers who come in two or three times a week, and they never look at a menu. They say, “Just cook.” So the structure remains, the ceremony remains—but we are customizing the tasting menu with that knowledge, and we are practicing a closer relationship to kaiseki and the Japanese tea ceremony.

YT: When I first opened my restaurant, I was influenced by modern Spanish and French cuisine. For some years now, I have been emphasizing Japanese taste and Japanese soul. This change in spirit was also reflected in the change of our restaurant’s name from Aronia de Takazawa to Takazawa. My signature is to put a Japanese touch to every dish. I don’t like to regard my food as fusion—it gives it the wrong impression. I’d rather call it Takazawa cuisine.

DB: I understand exactly. For us, it’s more than just the Japanese ingredients; it’s also the Japanese technique enhancing our own style and not creating confusion cooking. We have brought professors from the Tsuji school to show the captains of small boats how to kill fish Japanese style for sashimi-quality meat. And now that will also help support your vision when you cook in New York.

In the 1970s, the masters of the nouvelle cuisine—Roger Vergé, Paul Bocuse, Joël Robuchon, Gaston Lenôtre, and Frédy Girardet—welcomed the young David Bouley into their kitchens as a stage, or apprentice. The practice has a long tradition in Europe, and, like many chefs, Bouley learned much as a stage that later set the course of his career.

Today, the tradition permeates the U.S. culinary world as well; Bouley, however, wants to take it a step further. While most stages work for little or no pay, Bouley is creating a scholarship that will not only grant the recipient a two-week stint in one of his kitchens but also provide a stipend to enable the recipient to gain experience in a leading kitchen overseas and engage in additional culinary exploration. The Tribeca Native Artisan scholarship will be administered by Tribeca Native, a New York City nonprofit group that Bouley has chosen as his beneficiary for the Robb Report Culinary Masters Competition. The first scholarship will be awarded in 2015.

Tribeca Native was founded in 2003 by Nicole Bartelme, who later married Bouley. The purpose of the new scholarship, she says, is to celebrate the roots of the Tribeca neighborhood in Lower Manhattan. “Tribeca was built on butter and eggs, and many of the country’s first staples were brought off ships and collected here,” she says. While the first scholarship will recognize an early-career chef, Bartelme says future honorees will also come from other disciplines with connections to the area, including the arts, film, media, and technology.

Applications for the inaugural scholarship will be available online (www.tribecanative.org) starting April 1. A scholarship committee will review candidates, but the final selection will be made by Bouley, who will also help select a prominent restaurant in Asia or Europe as the location of the second staging. The scholarship will cover room, board, and travel expenses during the apprenticeship, as well as the cost of any necessary tools—such as the artisanal knives produced only in Kyoto—and scouting trips for ingredients. “We want the winner to have the flexibility  to do this and to learn,” Bartelme says, “and then to bring it back.” The scholarship winner will also be required to perform a measure of social philanthropy in the host country.

In addition to managing this scholarship program, Tribeca Native raises funds for other Manhattan nonprofits. Bartelme, who also helped found the Tribeca Film Festival, runs Tribeca Native with the help of three volunteers. Last year, her small group raised $20,000, 92 percent of which went directly to the Manhattan nonprofits. The organization’s fund-raising goal for 2014 is $60,000 to $100,000, which will be enough to support both a chef’s apprenticeship and several social-welfare projects.