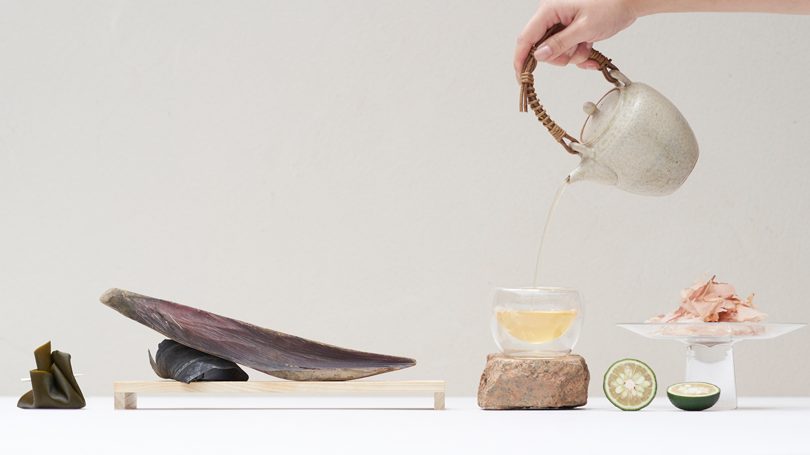 “Could it be jasmine? Or maybe oolong?” My inevitably wrong answer is met with a playful smile from Alvin Neo, the sommelier at Singapore’s elegant kappo-style restaurant ESORA. He goes on to explain the dried blend in a glass pot in front of us is Genmaica, a Japanese green tea combined with roasted brown rice, mixed with fragrant basil leaves.

Seconds later it’s being poured in front of us into elegant wine glasses paired with an elaborate sashimi selection. The tea complimented the seared Hokkaido cherry trout and accentuated the savory-yet-sweet flavors of the abalone with apple jelly. At ESORA they painstakingly pair five to seven of the eight courses with a hot or cold tea that balances and highlights the dish. As the menu changes according to the seasons and available ingredients, so does the tea.

ESORA’s describes their dedicated tea-pairing program as, “An elegant expression of nature’s essence and an ode to the people who have dedicated themselves to the perfect brew.” With chef and owner Shigeru Koizumi curating and refining the blend of tea to compliment the food he serves.

For many non-drinkers, a tea-pairing is the answer to having something delicious, yet refined to drink along with their dinner. “In Japanese culture, drinking tea symbolizes peace, spiritual rejuvenation and calmness. Unlike alcohol, tea pairing helps to create a soothing condition for diners to best enjoy the dishes. It is also a refreshing way to offer diners a new dining experience,” says Koizumi. ESORA notes it’s also a particularly popular choice during multi-course business lunches when people need to get back to work sober.

Although tea-sommeliers aren’t exactly new, as seen with Eleven Madison Park’s tea pairing program, this innovative offering is catching on in dining rooms around the world. “People are starting to take notice of tea, its level of flavor and how well it pairs with a variety of food and spirits options,” says Baccarat Hotel New York’s tea sommelier Gabrielle Jammal. Dedicated tea-pairing can be found in restaurants like Kajitsu in New York, The Test Kitchen in South Africa, yam’Tcha in Paris and Fu He Hei in Shanghai.

At yam’TCha, tea expert Chi Wah Chan and his wife and chef Adeline Grattard are trendsetters in this arena. The duo say they’ve been pairing Chinese and Taiwanese teas with their French, Asian fusion courses since their restaurant opened in 2009. “Right now, my favorite pairing is our Stilton Cheese Buns made by Grattard paired with a green tea,” says Chan.

In Cape Town at The Test Kitchen, chef and owner Luke Dale Roberts started creating a tea-pairing menu three years ago. “I wanted to give those that choose not to drink an interesting and exciting journey through the beverage component of the menu. Tea is an exciting product with such diversity in flavor.” Using renowned TWG Teas, he pairs dishes like bibimbap with Genmaicha tea.

With consumers, especially millennials, cutting down on alcohol consumption and sellers seeing a spike in tea drinking, this dining trend is likely to continue. “I am selling more tea than ever at the Baccarat Hotel. In fact, around 20 percent more year over year,” says Jammal. “Tea is the second most widely consumed beverage in the world after water. I think this is lesser-known and understood here in the U.S. But what’s happening all around us is that people are starting to make tea part of their day because of the health benefits and the reduced amount of caffeine. Tea’s inherent interactive qualities with minerals and other elements have a positive effect on people’s moods and overall health.”

Let’s raise our pinkies to that.