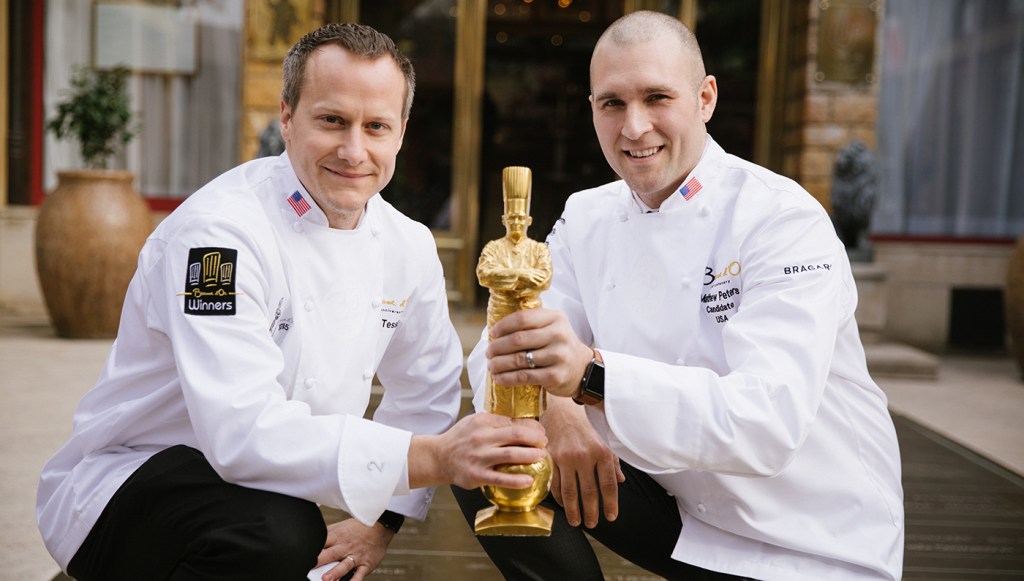 This year, for the first time in the 30-years of the Bocuse d’Or, Team USA took home the gold medal. Cooking in the last station (box five, which allowed them to be the last thing in the judges’ minds) on day two of competition (no one cooking on day one of the competition has ever won), Team USA beat out Norway (the gold medal winners of 2015) and Iceland, who took home silver and bronze respectively. The unprecedented win comes on the heels of chef Philip Tessier’s silver medal win at the last Bocuse d’Or in 2015. Although it was America’s first podium appearance, the victory was bittersweet—out of 2,000 points, Tessier was a mere nine shy of winning the whole thing. This year, after a month of letting the excitement soak in, Robb Report sat down with this year’s competitor, chef Mathew Peters, and his coach, Tessier, to hear first-hand about the road to gold—and why Tessier chose to not to be a contender.

Gold has been a long journey for you, chef Tessier.

Chef Tessier: It’s been a four-year journey with a fairytale American ending. For me [in 2015], there was no history was success. There was no history of winning. It was a huge risk. After the competition, the [winning] Norwegian candidate said he had picked me to win. In my mind, that was a golden trophy.

Is that why you decided to coach this year?

Chef Tessier: It was tempting to compete again, but I didn’t feel like I had anything left to prove. My ultimate goal was that we got gold, and I knew there was somebody out there who had new energy and new excitement. I had spoken to Mat and was excited about him. He’s an artist.

Chef Peters, did you know you had done enough to win gold?

Chef Peters: We didn’t watch the first day, so we had no idea what anyone else did. It was up in the air. You have no idea how other people will perceive your food.

And competition is always riddled with unexpected curve balls and unforeseen blunders.

Chef Peters: That’s the fun of cooking! [Commis] Harrison broke all of his tuiles and had to remake them. This put us 20 minutes behind, which was a big hurdle. He fought all the way back. Not many 21-year-old cooks could do that, let alone experienced chefs!

Coach Tessier: Harrison was behind, and I’m thinking, “Aw man, this is going to be a rough road.” I looked at Mat and said, “We’re going to have to help him out. Take the lobster Stromboli, and let’s do this.” They kept their cool and pushed through, which is a testament to their training and determination. The biggest challenge was actually these potato garnishes with a butter-fried shell. Left in the butter too long, they get thick. Sure enough, they stuck [to the sheet] like glue. Mat put them in the steamer, meanwhile I’m texting my parents, “Please pray these things come off.”

You mention their training. It is essentially a full-time job, right?

Chef Peters: The entire year was a roller coaster of emotions. We trained a lot and felt as ready as we could. To say we weren’t nervous would be a lie, but we were more anxious to get started. Competition felt like training at home, but with 2,500 screaming fans!

We did develop a pre-run ritual though that started as a joke. Harrison played an inspirational Arnold Schwarzenegger video before a [training] run. We had a good laugh, and from that point on, it was a must-play.

Coach Tessier: This year, I built them a replica kitchen—the same oven, the same burners, the same feel, the same footprint. Training in that space can’t be underestimated. It gives muscle memory and confidence. I was also here everyday working in the space, and I made sure all of the coaches were from Napa and San Francisco area so the team constantly felt our support. When I was competing, coaches were in New York, Chicago, and Minneapolis. Maybe once a month you got together. You learn from each of them. That’s probably one of the most rewarding factors of this whole journey. And that is why we do all this, so the U.S. is recognized as a culinary force.

Chef Tessier will be releasing a book entitled Chasing Bocuse through Prestel. It is slated for release in September of this year. And keep your eyes peeled for a restaurant from chef Peters in Austin—it is next on his to-do list. (bocusedor.com)