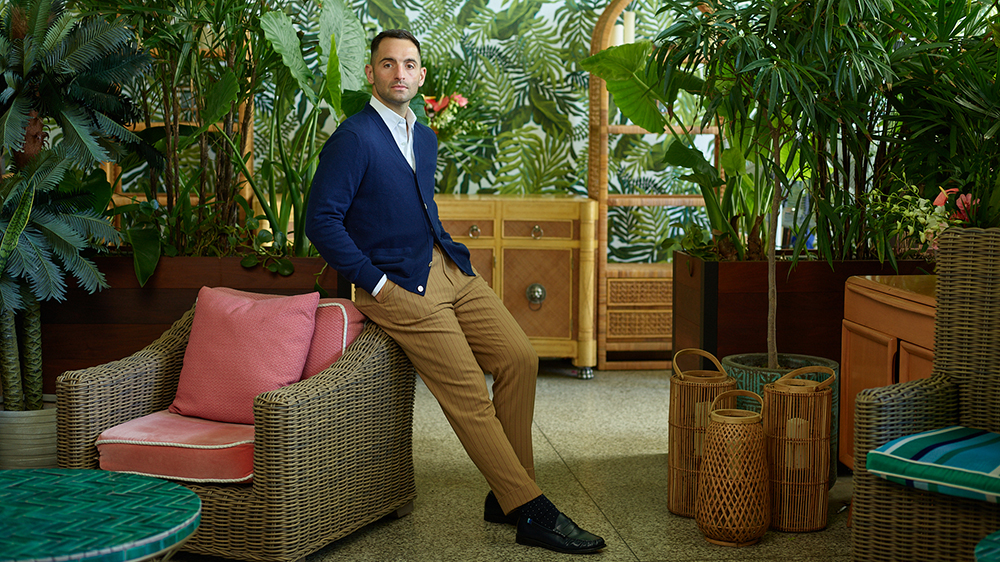 As an Italian American raised in Queens, Mario Carbone was a foodie almost by default. But, more than eating, it was the theater of restaurants that got him hooked on a culinary career. Putting in time at the likes of wd~50 and Café Boulud, “my love of food transitioned into a fascination with restaurants,” he says, describing the ballet between the front-of-house and kitchen as “a magic trick.” Carbone and his partner, Rich Torrisi, have been making magic on a nightly basis since 2009, when they opened Torrisi Italian Specialties and made red-sauce fare a fashionable evening out. Now their Major Food Group (MFG) counts over 30 restaurants, including Sadelle’s, the Grill and Mario’s namesake Carbone, with outposts around the globe.

While the chef remains dedicated to the kitchen, he has become MFG’s aesthete-in-chief, overseeing the music, uniforms, table settings and graphic design for all restaurants in the group’s portfolio. His interest in fashion led to last year’s launch of Our Lady of Rocco, a menswear collection informed by the ’80s wardrobes of his dad and uncles. He recently relocated to Miami to open the latest location of Sadelle’s and is plotting the next iteration of his magnum opus, Carbone, coming to Dallas this spring.

What’s something you’ve done recently for the first time?

I picked up tennis when I got to Miami, and now I’m totally addicted.

What’s the first thing you do in the morning?

I put on a sweat suit—I wear it like a robe—and slippers and make myself a coffee. I like to have the peace of the mornings. It’s really important.

I’m nothing but a ritual—I’m a weirdo that gets super thrown when things are off. If you know me, you’re probably familiar with me having my notebook and pencil in my hand. I’m constantly taking notes.

Josephine Dillon is the American representative of Ginori, and I’m probably the largest buyer in the United States—I collect vintage pieces, I have tons for my own personal use and all the Italian restaurants.

My cream-colored Vans. I have a stack of new ones, and as soon as they get scuffed-up and dirty, I put a new pair on.

I only have uniforms. If I’m going to the restaurants at night, I’ll put on a suit, unless I’m in the kitchen, where I’m in my actual chef uniform. If it’s the workday, I’m in chinos—I don’t own jeans—my Vans and either a polo or T-shirt. My closet is just lots of the same things.

I use the hell out of eBay and 1stDibs. I go down rabbit holes all the time. The other night, I remembered the Miami Hurricanes had a logo I was attracted to as a kid and I started buying up vintage Hurricane stuff.

My routine, if it’s all working in accordance to my OCD-ness.

Tom Ford. I do a lot of WWTD: “What would Tom do?” Tom did the uniforms for us at the Grill and the Pool, which was a dream of mine. His garments, his movies, his homes, the scruff coming out of his face—it’s all perfectly placed with a studied, elegant ease that comes from precision.

What is your favorite cocktail?

The first drink my grandmother gave me: sweet vermouth on the rocks. It’s stupid simple, but that’s still what I drink before going out or while having a sunset cigar. Carpano Antica is my go-to.

My last eBay haul was a collection of deadstock Wilson wristbands from the ’80s and ’90s, for tennis.

Risotto di mare, which is a dish we don’t make at any of the restaurants—it’s very time-consuming. I lived in Italy and worked in a little family restaurant in my early 20s, and this is a recipe from there.

I’m not someone who puts a lot of currency in the past that way. I believe that if you’re happy and content where you are today, you shouldn’t—nor can you, really—regret something that hasn’t happened in the past.

The problem with my gut instinct is that I’m emotional… The right answer is probably something much more studied and thought out.

I wear a lot of Our Lady of Rocco, and I get all my shirts from Charvet.

I hate driving. I really don’t get any pleasure from it.

Are you wearing a watch right now?

A Cartier Cristallor  from the ’70s. I also have a Tudor Black Bay, and my girlfriend got me a Cartier Tank Americaine—the second of what I hope will be a Cartier collection.

The last time you unplugged?

I don’t think I’m capable of totally shutting down or unplugging. Maybe that’ll come to me later on in life, but right now, I am too restless.

What is your favorite hotel?

Mezzatorre in Ischia—I spent a week there this past summer, and I’d like to now go back every year. It’s a very, very comfortable, happy place.

Who do you admire most and why?

My grandparents. They were born in Italy, and I often think about the courage it took to go somewhere foreign with the sole goal of making a better place for me. That courage I can’t even really understand.

What’s in your everyday bag?

I carry a portfolio with me that has my notebook, pen, highlighter, AirPods, house keys, a little leather two-cigar holder and that’s about it.

What is worth paying for?

Anything that buys you time.

Only to my girlfriend. Like, if she’s going away on a trip, I’ll put a note in her luggage, and she’ll do the same for me.