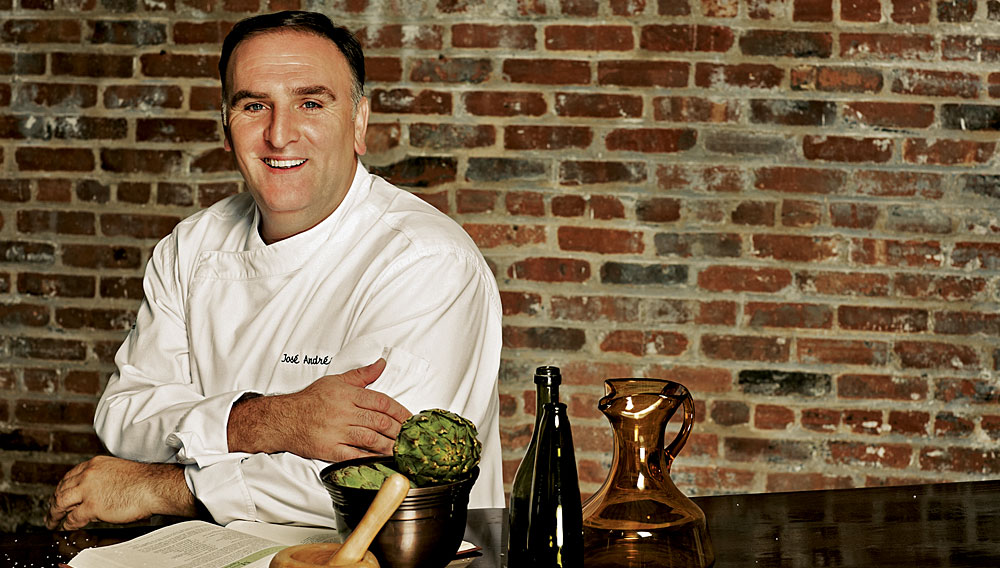 Of the many ingredients in his life, business and pleasure are perhaps the two that chef José Andrés mixes most admirably. This is among the countless reasons why the 42-year-old Spaniard’s considerable success in the kitchen has spawned equal success beyond it. After training with Ferran Adrià at El Bulli, Andrés moved to Washington, D.C., where he established a culinary empire, from restaurants to cookbooks and television shows, and a cooking style that combines the avant-garde (foie gras lollipops wrapped in cotton candy) with the classic. His 11 restaurants include Saam, the chef’s tasting room inside the Bazaar at the SLS Hotel in Beverly Hills, and Minibar, the six-seat restaurant tucked within his D.C. hot spot, Café Atlántico. In December, Andrés opened another restaurant-within-a-restaurant: an experimental eight-seat space called é, inside his tapas restaurant Jaleo (see “Las Vegas Confidential“), where a 17-course menu speaks volumes of the pleasure Andrés derives from his work. —Bailey S. Barnard

How does é differ from Minibar and Saam?

This is a question everyone is asking me—even myself. You have to remember a restaurant is something that is alive. It keeps progressing and maturing. You can argue that Minibar is 100 percent me—every experience of my life into a menu. Saam is more about California ingredients, but also me and a bit of the rest of the world. But é is purely Spain. It’s avant-garde and my best job representing Spain. With this kind of restaurant, you are not so worried about how much money it makes. You are only worried about how good you can do it.

Are you planning any other restaurants?

I would ideally like to be opening one to two places a year. We are planning an SLS Miami, which will have another Bazaar, but it will be completely different from the one in Beverly Hills. We have another project in Puerto Rico, one in Mexico, and one in France I cannot tell you much about. So for the next two years, we are very busy.

How do you relax when you are constantly opening new restaurants?

I don’t know how to relax. I see that as a very highly complicated skill that I don’t possess—and I’m not planning to learn it. But to me, life is very much like a vacation anyway.

Are you a collector?

A huge hobby of mine is looking for old cookbooks. I like to say that I don’t open restaurants, I tell stories, so I’m always searching for the stories and buying books that are one, two, three, four centuries old. I have close to 1,000 cookbooks at home. Probably 100 to 150 of those are vintage. I have a first-edition [Jean Anthelme] Brillat-Savarin, as well as one of the oldest Spanish cookbooks, by [Francisco Martínez] Montiño from the 17th century. Old cookbooks are great windows into the past, giving you an idea of how people lived, what they ate, and what was fashionable. Right now I’m working on this American restaurant and so I’m researching what American cooking is all about. When I arrived in the U.S., [Irma Rombauer’s] Joy of Cooking served as my guide. It is a fascinating key to American cooking and tastes.

I would say to live well is not to have regrets and to be always looking forward. I’m a chef, but I’m a businessman, too, and so I believe in enterprise, creating jobs, open economy, and to keep moving forward. I also believe we have to live a life in which our actions will always inspire others—and you don’t need to inspire millions. You may only inspire one other person, but this is a great way to move forward as a society.