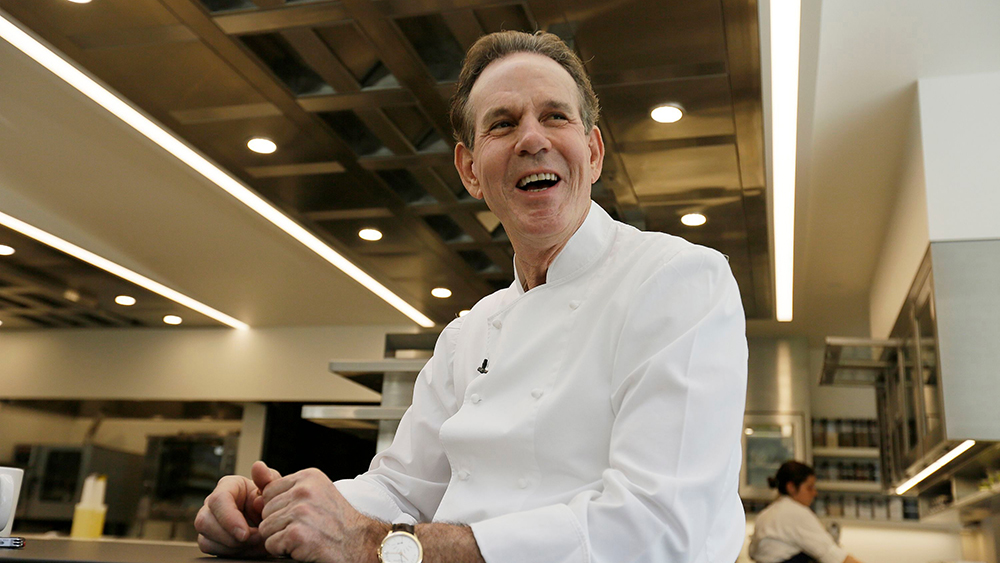 When we took over the French Laundry in 1994, in many ways fine dining was not that different from how it is today. But back then, it had been mostly focused on Europe. French cuisine has always been the father of great fine dining, and that continues, but just as we have evolved, so has the dining experience over these last 25 years.

When we began, I had just lost my job in LA and started a small olive-oil company, but I was looking for something else. On a visit to Napa I met Sally and Don Schmitt, the original owners of the French Laundry, which they’d opened 16 years before. They agreed to sell, and we settled on a price. Then I had to raise the money.

Eventually I convinced about 60 people to buy in, and I got a bank loan for the rest. It took 18 months. My biggest asset was my ignorance of the whole process, but that was also when I really started to see the French Laundry as a community, one that has drawn on the contributions of many people.

At the time we opened, in 1994, a shift was taking place in kitchens. We had all read the Great Chefs of France, and it was pivotal for my generation. It was not just about the recipes but also about people and their culture. We took it in, and in the 1990s you started to see chefs here, like Daniel Boulud, make a name for themselves. They were using the classics for recipes but creating their own versions. Fine dining was suddenly exploding with personality—Ducasse in France, Jean-Georges in New York.

And it was becoming more relaxed, too, thanks to chefs such as Tom Colicchio at Gramercy Tavern. The attitude when I grew up was very stiff and intimidating. We wanted to lighten that, make it fun and informal but still a refined experience.

When we opened, we had a staff of four in the kitchen, five in the dining room and two porters, plus a chef’s garden with four beds. There were already five-course tasting menus in the valley, and we’d heard people wanted more choices, so in the first week we added a seven-course menu. And then a nine.

We weren’t alone. Other chefs were doing the same. Food evolves by groups like this. Yet none of us is truly creating anything new. We just interpret food in a way that’s meaningful for us. It’s about time and temperature, making a meal memorable.

At the French Laundry we try to bring guests to an emotional place, using the ingredients to express the idea. The cornet we make was inspired by an ice-cream cone, but it’s a cracker with crème fraîche and onion. It’s a different point of view. Recognizable flavor profiles connect to the emotions, but using them in an unusual way makes it amusing.

In 2004, we expanded our second kitchen and bought two new buildings. We tapped geothermal energy to move toward sustainability and purchased the garden across the street to become even more so. Around the middle of that decade, the Michelin Guide expanded globally. It was already a part of my life because it represented the greatest restaurants in the world, but that it would come to the US had never dawned on us. When I got a call in 2006 that we were receiving three Michelin stars, it was very emotional—I’d been reading that guide for nearly 30 years—and I felt a huge sense of responsibility.

A restaurant takes on its own life. As we celebrate our silver anniversary, I am gratified and humbled by many things, but nothing makes me prouder than the restaurant being so much bigger than any one person.

We now have six acres under cultivation. Our staff is 10 times what it was when we began. We’re on our fifth kitchen. Sally’s tradition was to invite guests back to the kitchen, and we’ve always done that, but it was tight. We wanted to make it more spacious, so guests could see it without being bumped.

Though this year marks a notable milestone, it is not an end point. We take stock and take this opportunity to look ahead, to evolve and to embrace fresh ideas while remaining rooted in our foundation, always appreciative and respectful and forever indebted to all who came before.

It’s my hope that 25 years from now, the restaurant will raise a glass to another chapter, establishing itself as generational, and that it will continue to improve, shape careers and provide lasting memories for so many.