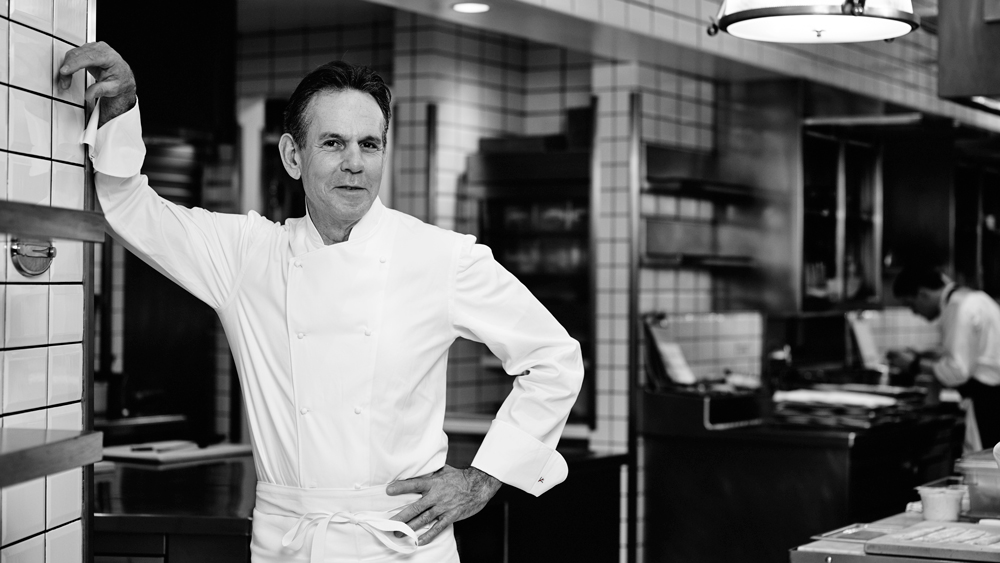 There’s a scene from Goodfellas that sticks in Thomas Keller’s mind. No, not the one where Dennis Farina tells Joe Pesci to get his shine box. The only American chef with two Michelin three-star restaurants is thinking of the famous tracking shot where Ray Liotta and Lorraine Bracco weave their way through the Copacabana on a date. “They’re led through the kitchen into the dining room and somebody brings the table over, brings two chairs over, drops a tablecloth, and puts them in the middle of the dining room,” Keller recalls. “That would not happen in restaurants today—no one is going to run through the dining room with a table, tablecloth and two chairs, right? But that’s the kind of spirit you want in a restaurant.”

When Keller opens TAK Room, he’s aiming to capture the energy of the midcentury-American restaurants he loves, nestling a bit of nostalgia inside the gleaming, modern Hudson Yards development. Like at the Copa in Goodfellas, the TAK Room will feature well-dressed waiters and a bandstand, but the environs won’t be the only throwback element. He plans to create faithful representations of the dishes that defined the best restaurants of America’s post–World War II boom times.

“That was a time when the great restaurants were continental-cuisine restaurants. Places like the Stork Club, Brown Derby and Blue Fox,” Keller says. “A lot of the dishes of that period of time were very simple. They had steaks, chops, roasts, Dover sole, and lobster thermidor was a big thing.”

When Keller and his team were developing his midcentury menu, they worked hard on the rich thermidor, with their efforts revealing the intention of the restaurant. They utilized the modern kitchen’s improved techniques, ingredients and equipment to make not some newfangled twist on the dish, but the ideal version of the classic. “This is history. We’re not trying to reclassify it. We’re not trying to redevelop it. We’re trying to represent what the food from that period of time is in a way that has integrity,” Keller says.

Dishes like the chicken will be carved tableside  Photo: courtesy Deborah Jones

But as important as the food is to Keller, most important to him about the TAK Room is being a little more raucous than his signature restaurants Per Se and French Laundry. “The French Laundry team, they have fun, but they’re not necessarily loud,” he says. “This restaurant requires a lot of movement. It can be loud, it can be fun. Nothing is prohibited in this kind of restaurant.” The theatricality and movement comes from waiters being much more involved in the meal. They aren’t simply dropping food, they’re carving, deboning and mixing dishes tableside, immersing diners further into the experience.

That has Keller thinking back again to the Copa, and why restaurants from New York to Miami to Las Vegas are embracing continental cuisine again. “That period of time wasn’t all necessarily about the food, it was about the interaction. It was about the excitement. It was a social occasion. As refined as I want the food and its flavor, we don’t want it to be precious or in any way interfering with the excitement and energy of the restaurant,” says Keller, a chef not necessarily known for ebullience and japes. The man more associated with pushing American fine dining to a new level with his dogged perfectionism just wants to embrace fun: “It’s just . . . food shouldn’t be serious.”