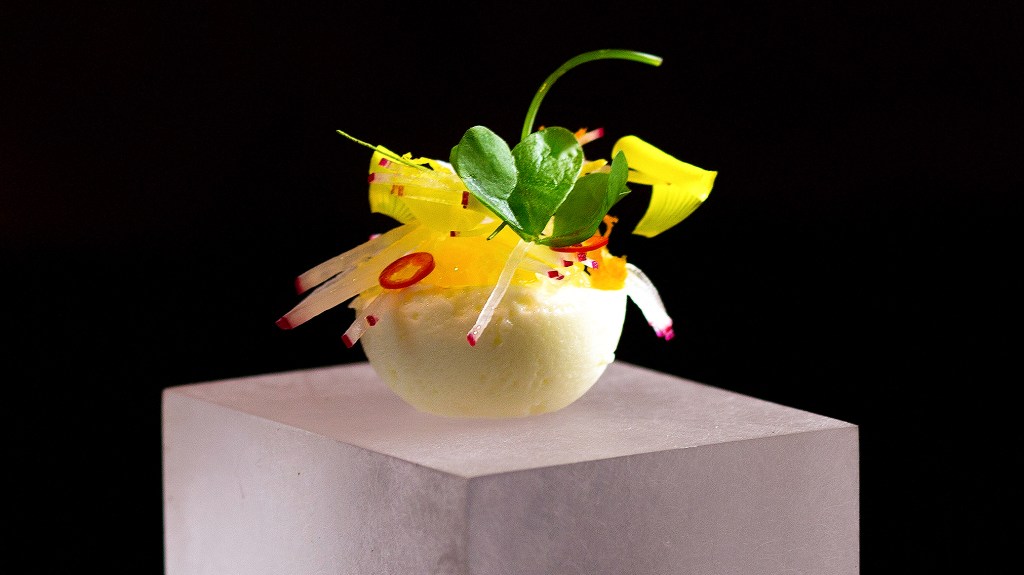 Michelin stars are not bestowed upon a restaurant for a lifetime. Every year, the tire-company-turned-gourmet-guide reevaluates its ratings, checking to see if an establishment deserves to retain its stars. For those with three, the scrutiny can be even more intense, as Jean-Georges Vongerichten can attest after Michelin downgraded his New York flagship to two stars last fall. However, there’s a surefire way for a restaurant to invite even more scrutiny from Michelin: change chefs.

America’s newest three-Michelin-star restaurant, Coi in San Francisco, has done just that. Earlier this month, chef Erik Anderson took over for Matthew Kirkley only a few months after Kirkley secured one of the industry’s highest honors for the restaurant. Perhaps the safest bet to defend the stars would be to repeat what Kirkley had done that so impressed Michelin’s inspectors. But Anderson has no plans for mimicry. He’s transforming Coi in his own image and hoping critics and diners like what they eat. “Nothing is the same. Everything is different,” Anderson told Robb Report.

Chef Daniel Patterson opened Coi in 2006. The minimalist, little fine-dining restaurant started a year after Patterson had committed heresy in the pages of the New York Times. He dared to be a Bay Area chef who spoke out against Alice Waters, the grande dame of California cuisine. In an essay titled “To the Moon, Alice?” he wrote, “So deeply embedded is the mythology of Chez Panisse in the DNA of local food culture that it threatens to smother stylistic diversity and extinguish the creativity that it originally sought to spark.”

He didn’t allow that culture to stifle his creativity. “Daniel is at the forefront of redefining what California cuisine is,” Anderson says. “Jeremiah Tower wrote the book on it, then Thomas Keller took it to another level. But then Daniel looked even deeper into what surrounded him in the region.” He made vegetable-centric dishes exciting and connected to nature through foraging. His efforts earned Coi two stars from Michelin and four from the San Francisco Chronicle on his way to becoming one of the most influential chefs in the country.

But 2 years ago, Patterson decided he wanted to take on other challenges in his growing restaurant group. He tapped Kirkley from Chicago—himself a two-star chef—to take over not just the operation of Coi’s kitchen but creative control, as well. Kirkley took the reins in 2016 and excelled at crafting a seafood-focused menu that Michelin wasted little time in crowning one of the country’s best. Last fall, Coi became the only American restaurant elevated to three Michelin stars in the year, becoming only the 14th one in America.

“Our inspectors have been following chef Kirkley since his days at L20 in Chicago, and we were thrilled to see that he is at the summit of his art,” said Michael Ellis, international director of the Michelin Guide. “We were truly impressed by his artistry and his team’s ability to produce sublime dishes.”

What Michelin didn’t know was that the restaurant they’d christened with its highest honor was about to undergo a major change. Kirkley was training to win a spot representing the United States in the international culinary Olympics, Bocuse d’Or. When he took home the American title, it meant he would leave his job to prepare for the competition in 2019, leaving Coi without a chef. But before Kirkley left, he put a bug in Patterson’s ear: What about Erik Anderson?

Anderson, a Chicago native, got his start at Thomas Keller’s French Laundry before heading back to the Midwest to work in Minneapolis. Eventually, he ventured south to Nashville to open the ambitious Catbird Seat. There, 22 diners perched around a U-shaped bar, watching the chefs cook their multi-course tasting menu. His time in Nashville earned him rave reviews, numerous accolades, and the respect of his peers.

A few years ago, Anderson met Kirkley at a dinner to honor legendary chef Jeremiah Tower. They bonded over a mutual love of French food and punk rock, and remained friends.

As Kirkley knew he would be leaving Coi, he helped Patterson look for a successor. When he approached Anderson, the chef had moved back to Minneapolis to work with Jaime Malone to restore the Grand Café with a focus on French fare. Faced with the chance to drop the life he was building to lead one of the nation’s premier restaurants, the decision weighed on him. “I’m 45 years old; I’m not 28 or 30. I had just started a business, so I had to think deeply about it,” Anderson says. “Grand Café is neighborhood French food that I love eating but not what I love to cook. The food is fantastic—I stand by it—but it’s not where my heart was at.”

Anderson headed west late last year, and Patterson served up a “best of” menu at Coi to buy the chef some time to create dishes that would debut in January. Anderson wandered the farmers’ market looking for inspiration and found it in abundance. “Citrus is mind-blowing,” he said. “They don’t have that where I come from.”

As he put pen to paper to brainstorm ideas, he didn’t want to replicate Kirkley’s approach in order to satiate Michelin. He learned years ago as the chef at Catbird Seat that trying to mimic someone else’s style wouldn’t allow him to cook the best possible dishes.

“I’m a completely different cook from back then at Catbird. I look back at some of the things, and it’s embarrassing,” Anderson says. “I had just come back from Noma, so you can imagine what that was like. Me and every other cook had just gone to Noma. Rene [Redzepi] is a genius, and it’s one of the greatest restaurants of our lifetimes, but that doesn’t mean all those ideas translate to Nashville.”

That experience taught him to cook within himself and be confident with what he put on the plate. “The older you get, you learn more what you truly love instead of going all over the place with styles,” Anderson says. “When you’re young, you’re like a cat following a laser light and jumping around every few seconds. Matt [Kirkley’s] food is incredible. He’s a seafood cook, so everything was related to fish and seafood. I tend to do more bird and red meat.”

Despite all the changes, he still wants to be true to Patterson’s original vision in that Coi evokes a sense of California. So as he developed the first menu, one dish stood out in particular. “I wanted to use sturgeon, because that’s a big California product, but I wanted to do something more than just utilizing the meat,” he says. So, he puts his own twist on it. “We poach it in chicken fat and serve it with charcoal-grilled chicken hearts and a sauce made from the chicken skins. And in that sauce, we use the notochord—the jelly of the sturgeon’s spine—to give a little gelatinous texture to it.”

On January 9, Erik Anderson made his debut. His $250 tasting menu included the sturgeon dish in addition to duck with sweetbreads, foie gras, and black truffle; beef with black trumpet and fermented pepper toffee; and Dungeness crab with citrus leaves and black sesame. He plans to not change the menu every day, instead focusing on executing strong, consistent dishes at each service.

Is he feeling the pressure? “Absolutely! But I don’t want to dwell on that,” Anderson says. “We’re going to do food at the highest level, and hopefully everything will fall in line.”