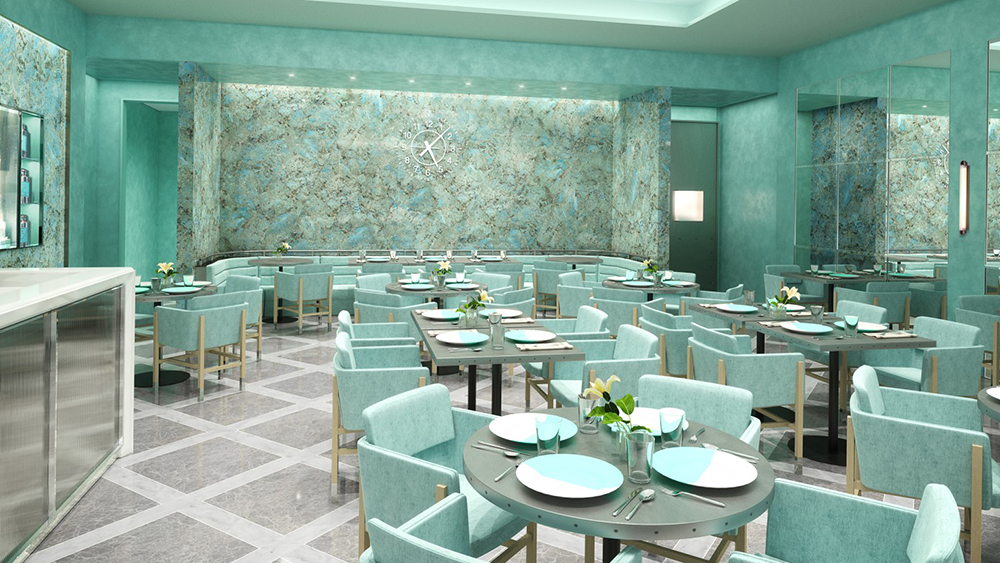 In just a few month’s time, West Coasters will quite literally be able to have breakfast at Tiffany’s. The historic American jeweler is planning to open a new Blue Box Cafe in SoCal this coming December.

The blue-hued bistro will occupy a prime position in the newly designed South Coast Plaza boutique in Costa Mesa, and represents Tiffany & Co’s first permanent eatery on the west side of the country. (The brand held a successful pop-up on Rodeo Drive last year.) The cafe will seat 45 guests in total and offer a menu similar to Tiffany’s first and flagship Fifth Avenue cafe that opened back in 2017.

Diners can expect a haul of American classics—chopped salads, club sandwiches and the likes—that showcase the finest locally sourced ingredients. Initially, the cafe will adhere to the local Covid-19 restrictions and offer limited indoor dining. Orange County restaurants were recently given the green light to reopen at 25-percent capacity indoors. However, Tiffany & Co. plans to run full services starting next spring.

Tiffany’s South Coast Plaza boutique, which is slated to open in November, first opened in the shopping center in 1998 and is the highest-volume store in the country next to the New York flagship. The new, 12,000-square-foot location is almost double the size of the previous space. In addition to the top-notch fare, it will offer the largest assortment of rare, diamond and colored gemstone designs from Tiffany & Co.’s high jewelry collection.

It will also be the first store in North America to exclusively preview the Tiffany T1 collection’s Tiffany T1 bangle and ring in 18-karat rose-gold with baguette diamonds. On top of that, the space will feature a gift wrapping station with blue boxes aplenty, as well as a personalization counter where you can get your new pieces engraved.

The move comes at a critical time for the storied brand. Last November, LVMH announced it was acquiring Tiffany & Co. for $16.2 billion, but then reneged on the deal in September in the wake of the Covid-19 pandemic. Subsequently, Tiffany & Co. filed a lawsuit against LVMH, and LVMH has countersued. Despite that legal minefield, Tiffany & Co. recently returned to profitability and announced plans to revamp its famous Fifth Avenue store.

“The store relocation and redesign further emphasize Tiffany’s commitment to California, where it operates 18 stores,” the brand said in a statement. “The Orange County community has fully embraced Tiffany since the brand’s arrival in the market more than 30 years ago.”

Breakfast at Tiffany’s followed by a day of shopping—what could top that?

Check out more images of the store below: