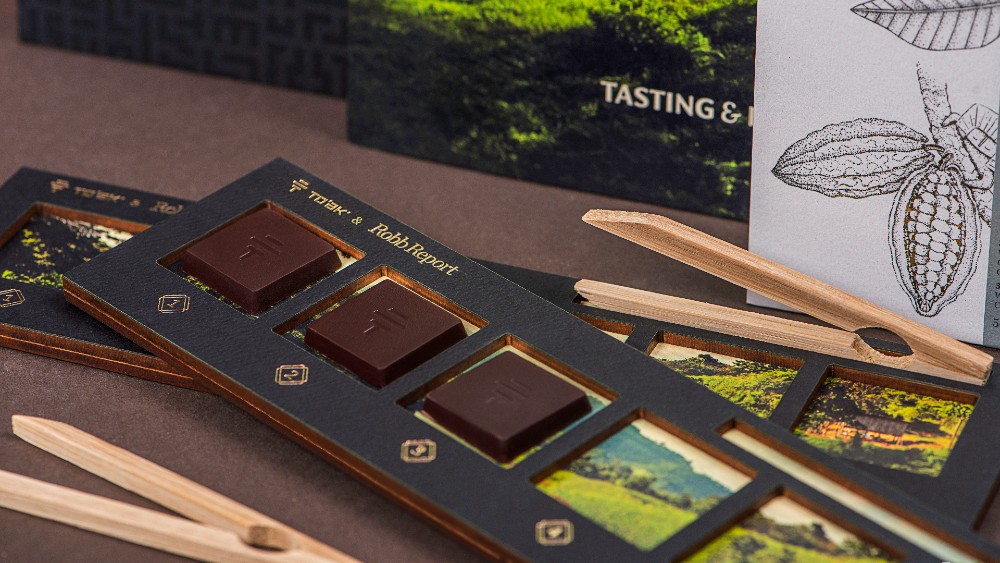 When it comes to fine chocolate, most of us have a favorite, so we know that different types have distinct tastes. You love Teuscher Champagne truffles, your BFF loves anything from La Maison du Chocolat, and so on. We tend to expect the same flavor profile from a particular brand year after year. And that’s what they bank on.

But there’s another way to enjoy your favorite sweet treat: the same way we experience fine wine or whisky, by tasting multiple vintages of the same varietal to understand the difference terroir or weather might make in a particular year or sampling how a singular cask can change the entire flavor equation.

Having sampled (a lot of) its work, we were particularly impressed with To’ak (pronounced Toe-Ack), and decided to partner with the brand to present its fine, single-origin chocolates as a limited-edition tasting experience, with just 500 kits being made.

We already knew that aging wine and whisky—and even tequila—in casks creates some remarkable taste profiles: how oak can change the flavor of the liquid inside, how a cask that once held sherry can impart luscious notes of nuts and fruit into a whisky made with zero nuts and fruits.

But cask-aging chocolate? Age and chocolate don’t naturally mix—think expired candy bars going stale covered in a weird white bloom in their wrappers. But age can actually improve chocolate; we’re talking the good stuff here, though: high-cacao, dark chocolate made in small batches from the most premium of sources, a rare and nearly extinct tree. To’ak has pioneered aging pedigreed chocolate in unusual casks, demonstrating that barrel-aging can bring one little dark square to entirely new depths of flavor.

For a bit of backstory: The founders of To’ak went deep into the forests of Ecuador and discovered a grove of ancient cacao trees—Ancient Nacional—that grew what was once known as the best cacao in the world. It was the beans from that cacao fruit that were made into liquid chocolate that wowed local Ecuadoran culture as well as the global elite centuries ago. But the varietal went nearly extinct after a tree virus spread through the country. So when To’ak founder James Le Compte and his partners came upon the Ancient Nacional trees, their discovery was a boon for both botanists and chocolate lovers everywhere. To’ak now helps to repopulate the forests and farm this native cacao as well as make its own brand of incredibly luxurious chocolate.

Inside our shared tasting kit, you’ll find several signature To’ak mini bars: selections from three different harvest years (2015, 2018 and 2019) and three others that have been aged in various whisky casks. Two of those cask-aged samples make their debut in this kit—one aged in a Sullivans Cove whisky barrel that previously held old tawny port and another aged in a Sullivans Cove barrel that once aged Chardonnay. Sullivans Cove, if you don’t know it, is Australia’s most prized whisky, and its casks are in high demand.

We enjoyed doing a few trial runs of paired and comparative tastings to see for ourselves what the fuss was about. The tasting kit has three mini bars of each of the six different chocolates, so you can taste through a few times, change up the pairings or share with friends. Also included are instructions for how to taste (nibble chocolate, sip whisky, swallow, but let chocolate melt in mouth) as well as tools to make it an adventure. All are dark-chocolate samples, with varying percentages of cacao. Just one note on that—if you’ve tasted high-cacao chocolate in the past that turned to glue in your mouth, you will be surprised by how creamy this dark chocolate is.

The 2015 Rain Harvest has the highest percentage of cacao at 80.5 percent and is the most intense of the harvest chocolates. Of the six samples, it’s the most bitter. But it also has some grassy, herbal notes and a coffee-like finish. A sweet dessert wine such as the Dolce 2006 from California’s Far Niente Winery tempers the bitterness and brings out a raisin-y sweetness from the chocolate. Glenfiddich Project XX whisky, from its experimental series, brings out some tropical fruit and nutty notes.

The 2018 Rain Harvest has 74 percent cacao and is creamy at the outset from all that cacao butterfat. It’s surprisingly fruity with a mocha finish. More mild than the 2015, it shows a delicious fruitiness that’s emphasized by a sip of the WhistlePig X Robb Report Spanish Brandy Cask finish 12-year-old rye. That whiskey was surprisingly versatile, making for an ideal pairing for several of the chocolates in the tasting kit. We also tried it with Hochstadter’s Family Reserve 16 Year rye, but it wasn’t quite a match. That powerhouse whisky burned right through the subtle flavors.

The 2019 Rain Harvest sample is nearly as intense as the 2015 and as creamy as the 2018, but its flavor profile is more earthy with a mushroom-y finish. This one paired well with Casa Noble Extra Añejo Single-Barrel tequila.

The barrel-aged chocolates are more layered, so they tended to pair well with multiple spirits. The Islay Cask one (just 73 percent cacao) opens with an interesting licorice note that gives way to subtle smoke and rich mocha, with peat on the finish. It was beautiful with Octomore’s 10.4 Virgin Oak Scotch whisky, intensifying the smoke and peat, as you might expect. But it was also interesting with Bruichladdich Black Art 1994, which brought out some hints of fruit. The Dolce also worked surprisingly well with this chocolate.

The sample from the Tasmanian whisky cask (which formerly held Chardonnay) is bright and fruity, giving way to a core of chocolate with a fruity wine finish. The fruit got an exclamation point when paired with a High West bourbon or the WhistlePig X Robb Report rye.

The final example in our kit, the Tasmanian Cask (which previously aged tawny port), has notes of nuts and graphite. It’s extra creamy. We tried it with an aged rum, but it didn’t sing. Again, the sweet dessert wine and the WhistlePig rye made delectable pairings.

Order one of the limited-edition tasting kits here to start sampling for yourself. Have fun.