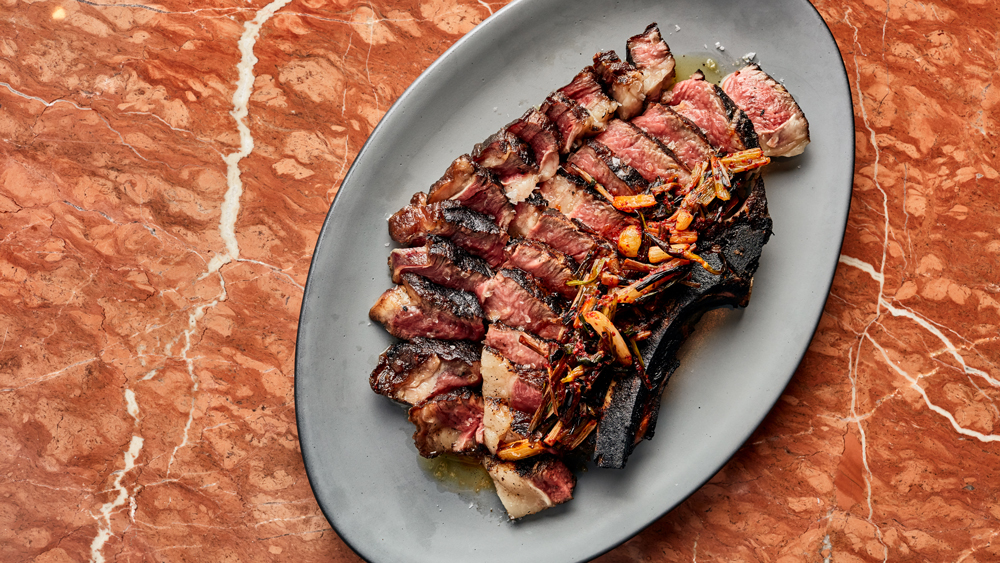 When Joe Flamm won season 15 of Bravo’s Top Chef in 2018, he knew he needed to run with his sudden fame. He left his executive chef job at the Michelin-starred Spiaggia and Café Spiaggia and secured investors for his first solo restaurant project. News of his move spread quickly, launching the Chicago chef’s unnamed endeavor to the top of the nation’s most anticipated restaurant lists.

But before he got too deep into the massive venture, Flamm took a few months off to spend time with his young son, Luka. He cooked for his wife, Hillary, he read children’s books, he played with blocks and he savored what he thought would be a brief stint as a stay-at-home dad. That break ended up lasting much, much longer than he could have ever anticipated.

“We started on this project over two and a half years ago,” Flamm said recently. “I felt like I was ready to do something on my own and then [Covid-19 happened]. There were some dark moments [over the past few years] when I was like, is this still going to be a thing? Does anyone still care? That was a huge, huge worry for me.

“But I have a lot of really good people around me who told me to just be patient and you’ll get it done at the right time. That’s way more important than just getting it done right away.”

His patience has finally paid off.

Flamm inside Rose Mary when it was still a blank canvas.  Photo: courtesy Rose Mary

Tonight Flamm opens Rose Mary in Chicago’s Fulton Market District. A collaboration with Sancerre Hospitality, the long-awaited restaurant is named for Flamm’s grandmothers, Mary Rose and Mary, and melds the cuisines of Italy and Croatia into what he calls “Adriatic drinking food.” He grew up cooking Italian food—and got acclaim for it at Spiaggia—and his wife’s family emigrated from Croatia; it felt like a natural pairing to him. (Also of note, rosemary, the shrub, grows along both the Italian and Croatian coastlines.)

Rose Mary tells the story of the Balkans through food, highlighting a seaside region that’s been mostly overlooked in Chicago kitchens and the culinary world at large, according to Flamm. He has traveled through Italy and Croatia extensively and has spent years researching the menu, learning about culture and traditions at family gatherings.

“Croatia has a really cool, kind of vibrant culinary scene,” Flamm said. “You see a ton of Italian influence, but there are so many influences from other countries like Hungary and Austria and Turkey as well. I read everything I could get my hands on [about their food]. There’s not a ton of Croatian cookbooks out there, but I think I own all of them now.”

The dishes at Rose Mary are light and bright, with a focus on seafood, spices, and, of course, Flamm’s homemade pasta. Most everything is cooked in a charcoal-fired hearth.

Flamm will show off his pasta skills, like with this spinach cappelletti.  Photo: courtesy Matt Hass

The dynamic yet casual dishes match the atmosphere Flamm is going for. The main dining room has plants hanging from the ceiling and seats for 130. The tables, and a bar that runs the length of the room, have a clear view of the open kitchen and its hearth, plus windows can be opened for an even grander glimpse into lively Fulton Market. In the future, an outdoor patio and seating at the chef’s counter will open up.

“I want it to have that neighborhood restaurant vibe,” Flamm said. “I want it to feel like that place where you can sit at the bar and have a plate of pasta and a drink and it’s a great Tuesday night by yourself. Or you get a big table with friends and you order a ton of stuff, get bottles of wine and shots of Slivovitz [plum brandy] and really do it up.”

While R&D was always going to be a challenge (few places in the area even make burek—a meat-filled pastry common on the streets of Croatia—so Flamm’s team lacked reference points when crafting their own version), Covid-19 made sourcing even more of a hurdle. Specific Croatian beers, Balkan wines and olive oils are no-gos, but Flamm has been able to source some random ingredients like Paška sir, cheese from the island of Pag, through his contacts.

“It seems like everything is so global, that you can get anything anywhere. But I can’t,” he said. “I’m just asking anybody and everybody. I see somebody’s traveling and I’m like, ‘Hey, can you shove this in your purse before you get on the plane?’ It kind of feels like the Wild West right now. But we all want to get back to it. We all want to work.

“I think as the world starts to reopen and we gain steam over here we’ll have a better time figuring it out. You just have to be flexible and realistic with your expectations, be grateful for what you have.”

It’s an attitude Flamm, who is now expecting a second child with his wife, has learned to embrace over the past few unpredictable years.

“The soft opening was a very emotional day for me,” he said. “Ever since I was 16 years old I wanted to open a restaurant. There are little things I want to change, but I’m just really trying to be present, be in the moment and enjoy it. This is crazy special to me. We’re just happy that we’re going forward, we’re able to open and people want to come.”