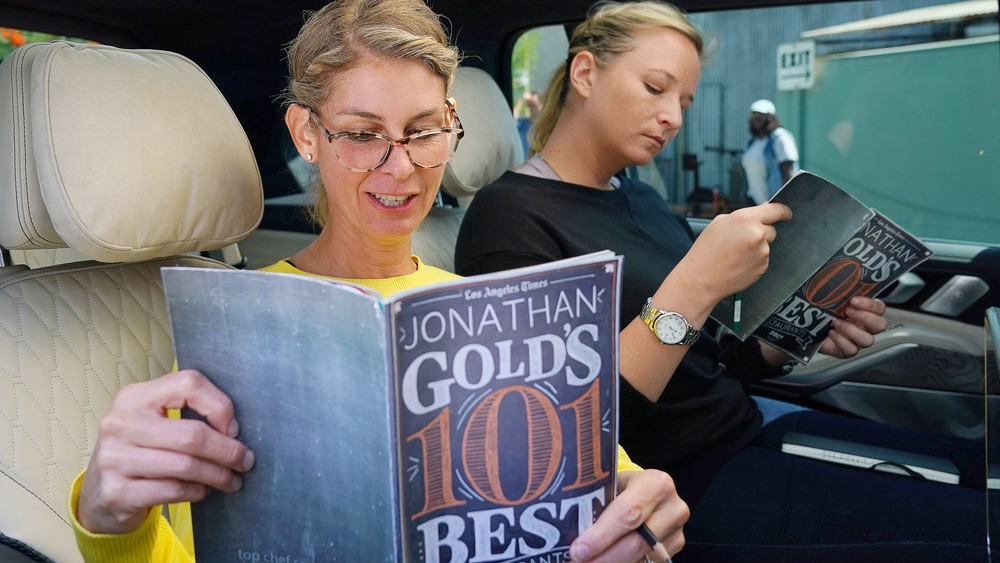 For people who don’t live in Los Angeles, it’s hard to describe Jonathan Gold’s impact. So it seemed daunting for Top Chef to take on the task of explaining to viewers across America what the late food critic—the first food critic to ever win a Pulitzer Prize—meant to the city. Yet, they found a way.

The contestants split up into groups and traversed LA like Gold did, eating at some of his favorite spots. Sure, the chefs could seem a little ham-fisted in the way they spoke of Gold, but the most moving parts of the episode were hearing from the chefs and restaurateurs whose lives were changed by one of his reviews. Because these weren’t necessarily places that got this kind of mainstream seal of approval.

At both the LA Weekly and LA Times, Gold explored the rich tapestry of cultures that comprise Los Angeles and treated cuisines that weren’t considered haute with the respect and rigor he afforded this city’s high-end establishments. He had a knack for finding the hidden gems that primarily served one of the city’s numerous immigrant communities, and with a review could give them a boost of attention usually reserved for restaurants with a brigade of publicists.

He was far ahead of his time when it came to democratizing dining out and widening the canon of great restaurants. A generation of food journalists coming up in his wake have largely internalized his approach to restaurants—where the food truck serving seafood tostadas inspired by a region of Mexico could be as celebrated as the Michelin-star chasing restaurants. So Top Chef built the entire episode around the legacy of Gold.

There was no quickfire this week, instead they cheftestants ate at restaurants that Gold ranked in his last list of the 101 best in the city. Here are the places they visited.

Ruth Reichl is the former food critic at the New York Times, and a kindred spirit of Gold’s in her expansive tastes in the places she reviewed. She was a very close friend of Gold and his editor back when she was the editor in chief of gourmet.

The cheftestants were asked to use their day of dining out on Gold’s favorites as inspiration for a dish they’d serve to 200 friends of Jonathan’s at LA’s Union Station. They’d have three hours to work in the kitchen, then one hour to get ready to serve

Like last week, we’re still really early in the season, so in the big elimination challenges, you’re mostly getting fleeting glances at the dishes instead of going deep into the weeds with them. So the time in the supermarket and kitchen move really fast. Of course, there was a bit of old-school chicanery from Lisa Fernandes who bought up all of the duck at the supermarket so Eric Adjepong would have to think of a different dish. And then the classic time crunch of cooking: WILL KAREN AKUNOWICZ BE ABLE TO GET ALL HER LITTLE HANDMADE DUMPLINGS DONE!?! (Spoiler alert: yes.)

The chefs set up and the luminaries flood into the hall, among them Jon Favreau, Roy Choi, Gold’s wife Laurie Ochoa and more. Let the tasting begin. Choi was a big fan of Brian Voltaggio’s Filipino-inspired short rib. Melissa King nearly killed Tom Colicchio with a Szechuan pepper. Padma Lakshmi and Gail Simmons were pretty impressed with Jaime Lynch’s tortilla making. Brian Malarkey had no shortage of confidence in his mediocre tartare. “Cheese and fish, it happens!” declared Lee Anne Wong. Everyone swooned for Kevin Gillespie’s deep-fried version of pate en croute. And Nini Nguyen’s clever masa ball soup is “An idea whose time has come,” according to Tom.

But, there was a pause in the action in there. Stephanie Cmar, all smiles, describes her naan dish to Gail and Padma.

“It’s an Indian nacho,” Stephanie retorts as you watch the smile wipe from her face and the blood drain from her body, while an ominous score starts playing.

Then, a quick cut to her confessional. “Coming up with my dish, I did not take into consideration that I would essentially be serving Indian food to Padma.” Cut back to the event and there’s sweet, sweet Gail, dryly asking the most damning of questions possible, “Have you ever cooked food like this before—with these spices and flavors?” Well, we don’t need to rack our brain who will be one of the people on the bottom.

“I’m sorry, but this tuna died in vain.” Reichl, said of Angelo’s fish.

Ok, Ruth had another burn, this time about Malarkey’s tartare, “This one was a show-off dish. It’s the kind of thing a lot of people who hate restaurants hate about restaurants.” Ouch.

In the top three were Voltaggio, Kevin and Nini.

The winner of this week’s challenge is our favorite ginger-bearded Southerner, Kevin and his deep-fried terrine of roasted pork, mushroom and black currant, that he served with his granny’s apple butter. While the other judges have developed poker faces when discussing dishes as to slightly obfuscate the final result, Reichl blessedly has no such ability. She just blurts out what’s on her mind and you knew she loved this dish when she’s telling Kevin he needs to bottle and sell the apple butter.

Kevin was a fitting winner on the night they honored Gold, who passed away from pancreatic cancer, after you learn that Kevin fought a rare form of renal cancer a few years ago. Part of his motivation for coming on Top Chef again was his wanting to show his recovery—he wanted to prove to himself he could still cook good food for people. He showed in this challenge he is more than capable of that.

“The three bottom chefs actually forgot that food is supposed to be delicious,” Reichl says. That seems like something a chef shouldn’t forget, but alas. That trio of bottom dwellers this week were Stephanie and her dry, bland Indian nacho; Eric’s scallop with not-braised-enough cabbage; and Angelo’s super sweet broth with tuna.

You kind of knew the result well before Judge’s Table even happened. Seasoned Top Chef watchers could sense Angelo was in trouble when they edited in footage of Jen tasting the dreaded broth and she mutters to herself, “Something’s not right.”

Then, when the final deliberations happened, Reichl really had nothing nice to say about Angelo’s dish. “If you’ve ever been to Jitlada, it is the most rustic restaurant and from that inspiration make this fairly twee dish, it’s not really understanding what this challenge was.”

So Angelo is the second cheftestant bounced this season.

On next week’s episode we’re getting some more star power with Ali Wong and Randall Park making an appearance to the squeals of delight of the cheftestants and Wong herself. And then we get a glimpse of Ludo Lefebvre and his amusingly tart French accent declaring of some mystery dish “I don’t like it. I don’t know why.” We’ll find out why, next Thursday.