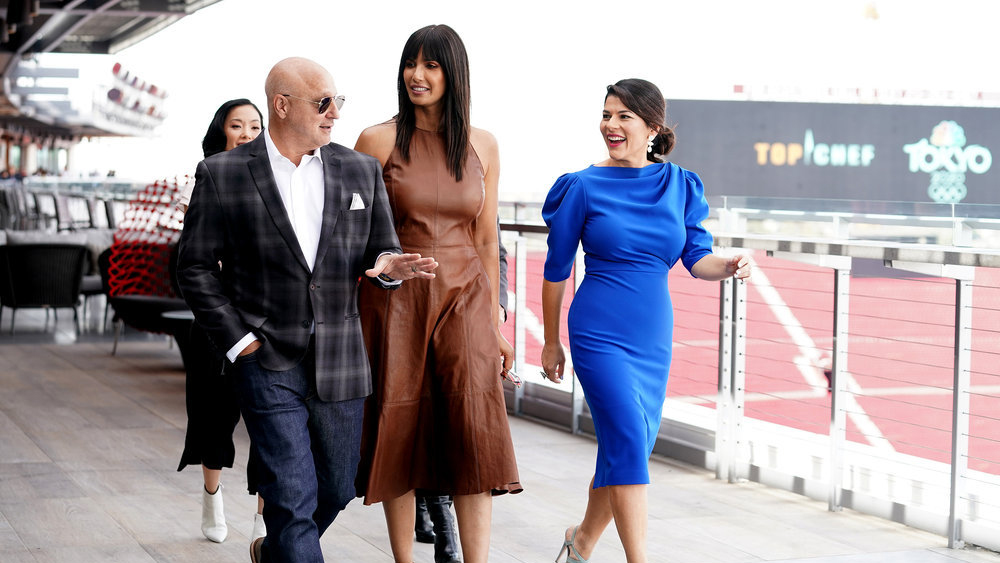 This season of Top Chef exists in the Before Time, an epoch so similar to ours, yet so painfully divergent. In this alternate version of Earth, people sit with each other to eat, chefs cook without masks and the 2020 Tokyo Olympics will actually happen. As I’ve watched most of this season, I’ve been able to not really think about the first two instances of Covid-19 changing the world. The show still washed over me as per usual. But that last one, well, it depressed me as I watched the latest installment of All Stars LA.

With Bravo being a subsidiary of NBC Universal—the rightsholder for the Summer Games in Tokyo—this episode of Top Chef was set up as a bit of corporate synergy, where our plucky little cooking competition show becomes a showcase for the athletes NBC wants us to tune in to watch in a few months’ time. As with everything, Covid-19 led Olympic organizers to delay the games until at least 2021, meaning these stars would appear on our screen this week and then just as quickly disappear into the ether. As a big fan of the Olympics, it was dispiriting reminder that we won’t get one this year and that when this Top Chef ends, we won’t get another season for a while either. But, I’ve decided to savor this year while I still have it.

Three-time James Beard award-winner Sherry Yard awaits the remaining six cheftestants. She’s a superstar in the world of pastry and that has the competitors worried that they’ll have to make a dessert, which always trips people up on this show. Sherry tells the assembled crew of chefs that there’s no difference between them and an executive pastry chef as the camera pans their faces and they look on in shear dread of having to make a dessert.

The cheftestants are given basic pantry ingredients like sugar, flour and eggs, but they’re also given a chance to win more ingredients, because the producers have combined this with a classic quickfire of yore. Each chef is given five minutes to guess 20 ingredients blindfolded, testing the quality of their noses and palates. Whatever they guess right, they can use in their dessert. Also, the more you get right, the more time you have to bake and cook.

Results vary for the cheftestants. Flat-brimmed-hat dad Bryan Voltaggio gets stumped on prosciutto while still posting a respectable score, while Gregory Gourdet is out here calling out tarragon and guava paste with ease. Melissa King ties Gregory and it seems like they replaced Stephanie Cmar with a cyborg designed to detect flavors as she goes 15 for 20 and secures an hour to bake.

Brian Malarkey is dead last, only identifying seven ingredients and possibly showing he’s more of a guy who creates restaurant concepts to sell and maybe not the most talented chef? He may not be a legend in the kitchen, but he’s a legend at the bank. He finishes last along with Karen Akunowicz, they each only get 30 minutes to cook.

As for the results, Gregory gets too complicated; Stephanie doesn’t peel her peaches; Voltaggio’s flavors fight with each other; Karen’s panna cotta doesn’t have time to set; Malarkey finds success baking cake in the wood-fired oven and Melissa embraces molecular gastronomy by making liquid nitrogen ice cream in the stand mixer. She won the day with her pistachio olive oil cake with meringue. It gives her a boost of confidence she needed after a few rough challenges. It also gives her first dibs in the elimination challenge to decide which course she gets to cook, while deciding for everyone else their respective courses.

Your favorite Top Chef recapper (me, I’m talking about me), a few years ago profiled one of LA’s—if not the world’s—great chefs, Niki Nakayama of Michelin two-star n/naka. At her restaurant she serves modern kaiseki, her California-inflected version of the Japanese fine dining art form. I wrote back then that “kaiseki is about expressing a time and place in nature through the flavor and visual presentation of a multicourse meal.” Nakayama and her partner, co-chef and co-owner Carole Iida-Nakayama are masters of the form and they’re here not only to judge the chefs, but also serve them a kaiseki menu to help the cheftestants understand what they need to do the following day.

After learning the traditional courses of kaiseki, Melissa gets to assign each cheftestant the one they must cook for a collection of Olympic athletes at the LA Coliseum, home of the 1932 and 1984 Games. She doesn’t go for sabotage, instead she pairs each cheftestant with the course she thinks they’ll excel at. Melissa wants to beat her competitors in the fairest fight possible.

This challenge is a 180 for most of the remaining chefs. Kaiseki is a reserved and controlled cuisine, whereas they’re all used to making these big umami bomb dishes to punch the judges in the face and get their attention. They’ll have to show off a totally different set of skills this week and the winner gets a trip for two to Tokyo to watch the Olympics. Hopefully, that invitation extends to next year.

Let’s all take a brief pause, as the producers do, to appreciate Karen going beastmode and doing some powerlifting on the patio. Note to self: Don’t mess with Karen.

At the Coliseum, cooking begins and a few are slightly off their game. Malarkey isn’t used to this much restraint; Karen struggles to make a grilling station big enough to feed 13 people at once; Melissa is unfamiliar with using a commercial steamer instead of bamboo baskets on a stovetop; and Gregory finds himself too restrained with his salt. Only Voltaggio and Stephanie seem truly comfortable with the challenge and it shows in the reaction from the diners, who universally love their dishes. Here’s what everyone cooked:

“There’s a subtlety to the combination, but it’s still a really assertive dish,” Tom says of the Panna cotta that connected well with nature. And Voltaggio showed of his technical prowess with Niki commenting that, “How you cut the scallops, that texture and that bite was perfectly balanced with the rest of the ingredients that you had.”

The judges agreed there was a unanimous winner and that was Stephanie. “You did an amazing job of showcasing the citrus and you brought California to kaiseki,” Carole tells her. Stephanie is SHOCKED. She picks up her first win of the season with nary a few weeks remaining. The underdog moves one step closer to the finale.

The four on the bottom this week didn’t suffer for lack of a good concept, each of their mistakes was technical in nature: Melissa didn’t get her custard to set properly; Malarkey’s soup was too cold so the ingredients didn’t steep in the way he wanted them too; Gregory’s broth desperately needed salt; and Karen’s duck was cut inconsistently on top of the the skin not being crispy enough. Ultimately, those two mistakes were one too many for our powerlifting friend.

It’s déjà vu all over again as Padma tells Karen to pack her knives and go for a second time this season. She’ll head to Last Chance Kitchen once again and Karen leaves this episode saying she’ll keep fighting because “Goonies never say die.” So true, Karen. Also have I told you all about the time I ate next to Josh Brolin in a restaurant in Venice and said “I liked Stranger Things more the first time I saw it and it was called The Goonies”? No? Well, ok, I’ll tell you another time.

Malarkey looks like he may go Chernobyl next week, a full meltdown at judge’s table. Tune in to see what caused his reactor core to explode.